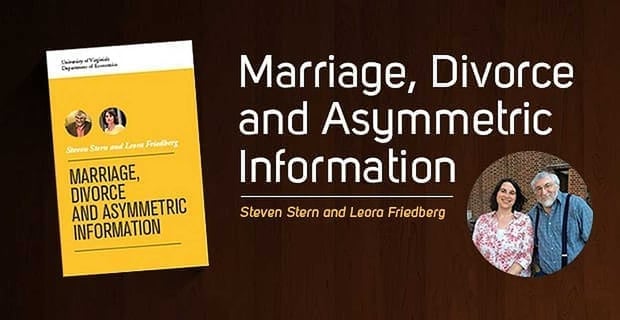 Marriage and Divorce: An Economist’s Perspective

TL;DR: In their latest paper “Marriage, Divorce and Asymmetric Information,” Steven Stern and Leora Friedberg, both esteemed professors at the University of Virginia, take an economist’s look at perceived happiness within marriages.

For most people, it can be hard to understand how economics and the government affect marriage and divorce, but thanks to Steven Stern and Leora Friedberg’s new study, that just got a whole lot easier.

In the paper titled “Marriage, Divorce and Asymmetric Information,” Stern and Friedberg, both professors at the University of Virginia’s Department of Economics, used data from the National Survey of Families and Households and examined 4,000 households to take a closer look at:

So what’s it all mean? Well, Stern was kind enough to go into details about the research and its most important results with me.

How couples bargain and withhold information

A large portion of Stern and Friedberg’s study focuses on how couples bargain with each other over things like who does what chore, who has control over certain situations (like picking the kids up from school) and more, as well as how they relay or don’t relay information to each other.

Professor Steven Stern, of the University of Virginia

“In particular, it’s about bargaining situations where there might be some information each partner has that the other partner doesn’t know,” Stern said.

“It might be that I am bargaining with my wife and I’m being kind of demanding, but she’s got a really good-looking guy who is interested. While she knows that, I don’t know that, so I’m overplaying my hand, ” he continued. “I’m demanding things from her that are too much in some sense because she has a better choice outside of marriage than I realize.”

Associate Professor Leora Friedberg, of the University of Virginia

From Stern and Friedberg’s combined 30+ years of experience, when couples are 100 percent transparent with each other, they can quickly come to equitable agreements.

However, it’s when couples withhold information that it leads to tough bargaining situations … and potentially divorce.

“By allowing for the possibility of this extra information that not everybody knows, it’s now possible to make mistakes,” he said. “What that means is that sometimes divorces occur that shouldn’t have occurred, and maybe that also means it’s worthwhile for the government to try to discourage people from getting divorced.”

Remember those 4,000 households? What Stern and Friedberg did is examine couples’ answers to two questions included in the National Survey of Families and Households:

Stern and Friedberg then went through several mathematical equations and models to estimate:

Within these different models, they also were able to account for the effect of:

While Stern and Friedberg also wanted to see which of their models shows that there are situations when the government should step in and create policies that encourage divorce for certain couples, they ultimately determined there are too many unknown factors.

Essentially Stern and Friedberg’s main goal with this groundbreaking study was to measure how much lack of information exists between couples, how much that lack of information affects couples’ behaviors and what those two aspects imply about the involvement of the government in marriage and divorce.

“I hope it’s going to encourage economists to think about marriage a little bit more generally,” Stern said. “The one thing non-economists should get out of this is that a way to achieve better bargains in marriage is to set up your marriage in such a way that there’s as much transparency as possible.”

You can read more of Steven Stern and Leora Friedberg’s study at virginia.edu. To see more of their individual work, visit virginia.edu. You just might learn something!

How Movies Can Save Your Marriage; Dr. Ron Rogge’s Breakthrough Research

6 Ways a Prostitute Could Save Your Marriage