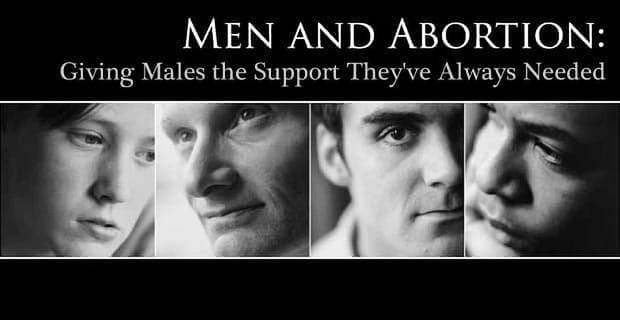 The 411: Men and Abortion is the world’s first site dedicated to providing helpful information to the millions of men who have been the partner or friend of a woman who’s had an abortion.

Abortion has been legal in the United States for more than 40 years now, but most of the legal documents, studies and articles written on the subject are about the effects on women.

But what about the effects on men?

One in three women will have an abortion at some point in their reproductive lives, but Dr. Arthur B. Shostak said half of those women are accompanied by a male partner or friend to the clinic. Don’t they deserve resources, too?

That’s exactly why Shostak and Claire Keyes created the Men and Abortion website.

Through years of research and surveying thousands of men and women, Shostak and Keyes found there’s a “world of waiting room men” who are left feeling ignored, stressed and confused about the roles they play in this life-changing experience.

These men desperately want support and answers to their questions just like women do, and Shostak knows this firsthand, having gone through it himself in the 1980s.

Men and Abortion lists clinics that encourage men’s participation. Call them, talk to them and find one that listens to you. See if what they’re offering is the environment you’re seeking. You want to choose a clinic that respects and welcomes you.

“The puzzle I took away from my experience was why are clinics indifferent to the opportunity they have to teach waiting room men something about contraception and family planning?” he asked.

Another goal of Men and Abortion is to be a trusted alternative to anti-choice websites and organizations that use false information and sensational media ploys to convince men that they (and even the women) don’t get a say on abortion.

To do this, Shostak, an Emeritus Professor of Sociology at Drexel University, brings in the scientific side, while Keyes, the former director of Allegheny Reproductive Health Center, brings the emotional and spiritual component into the conversation.

“That’s part of what makes us such a strong team — that we come to this from different perspectives so that he is constantly monitoring and making sure to the best that he can that he’s getting an accurate representation of what it is that men are looking for when they come to an abortion clinic, and I’m responding to the emotional and factional and spiritual concerns when they’re actually there,” Keyes said.

Whether it’s training clinic staffers, offering medical advice or working with the media to bring people trusted information, Men and Abortion is a site that informs readers of both genders in a calm and engaging way while helping them formulate their own opinions about how to proceed.

Dr. Arthur B. Shostak, co-founder of Men and Abortion

In particular, Shostak and Keyes want clinics across the nation to make time to listen to men about how they’re feeling, and they want society to stop framing abortion as “a woman’s problem” and instead think of it as a challenge two people can compromise on and work through together.

What men AND women need to know

Shostak and Keyes work hard to give men and women tips that are specific to their respective genders, as well as ones that are universal.

“They conceived together this fetus, and the fate of the fetus should be decided together, with her having 51 percent of the vote from the outset,” Shostak said.

Shostak added that women should keep in mind that it can be shocking for men to be approached by their partners with the news that they are pregnant and have already made a decision without them. A collaborative conversation is always important.

However, he believes men should not have more than 49 percent of the vote.

“They conceived together this fetus, and the fate of the fetus should be decided together, with her having 51 percent of the vote from the outset,” he said. “Only a female’s body and health and life are endangered by the pregnancy. No guy should ever assume the power to intimidate or in any other way draw a woman into this medical procedure if the woman herself isn’t in favor of it.”

Over the years, Men and Abortion has gained a lot of traction and coverage, but Shostak and Keyes aren’t stopping now.

They want to continue encouraging clinics to upgrade their waiting room services, speaking at as many conferences and meetings as possible, getting the media involved and maybe even take part in developing a Males for Choice national organization — all with the hopes of keeping this important conversation alive.

“We hope we have made clear how deciding the resolution to an unwanted and ill-timed pregnancy is a decision to which males can make a positive (though MINORITY VOTE) contribution,” Shostak said. “We hope we have shown males how they might aid their sex partner in reaching the best decision for HER and then, secondarily, for them.”

Keyes added that she would like to continue helping men say how they really feel, not how they think they should feel, and giving them the confidence to support their partners by providing them with the best and most accurate information out there.

“We know women do better after an abortion with a supportive, informed partner, which is another big reason for partners to be involved as much as the facility (and the relationship) can accommodate,” she said. “Men feel better, too, if they are informed and have participated in the decision-making process, so ideally that is how we’d like to see couples come to us.”

“The most important goal of the site has always been to be a site that people can trust — that you can trust everything you find on there is the truth and is based on what patients, counselors and therapists have told me through the years,” Keyes continued.

Men and Abortion lists clinics that encourage men’s participation. Call them, talk to them and find one that listens to you. See if what they’re offering is the environment you’re seeking. You want to choose a clinic that respects and welcomes you. To learn more about Men and Abortion, visit www.menandabortion.com.