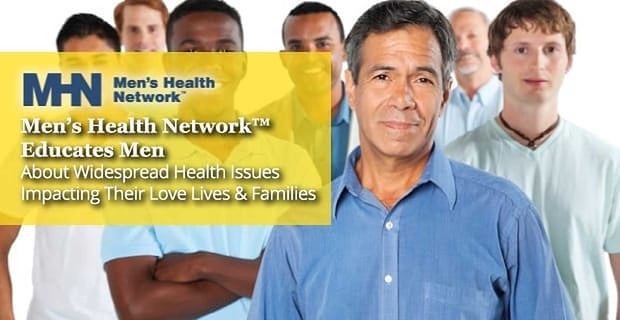 The Short Version: A lot of men don’t like to talk about their health issues because they feel societal pressure to act strong and tough it out — but there’s nothing tough about ignoring symptoms and letting your body suffer. An unhealthy lifestyle can have long-term negative effects on you as well as on your family, so it’s important to be aware of what you’re putting in your body and how it can impact your health and happiness. Since 1992, Men’s Health Network (MHN) has helped men assess their health status and learn how to identify and treat cardiovascular disease, STDs, diabetes, and other common illnesses among male patients. Whether you’re looking for information on testicular cancer or want to check your blood pressure at a free clinic, you can find helpful and free guidance thanks to the online resources and in-person events organized by Men’s Health Network.

Founded in 1992, Men’s Health Network is a nonprofit organization dedicated to raising awareness about health issues among boys, teens, and men. Every June, MHN celebrates Men’s Health Month with educational activities and screenings across the country, including at their home base of Washington DC. This educational screening event is aimed at providing free health screenings for both men and women, but offers the specific prostate specific antigen (PSA) blood test for men over the age of 40 years.

One year, a man came up with three years’ worth of his personal health “report cards,” from previous MHN events, in hand. Ana Fadich, the Vice President of MHN, said she had talked with him the previous year but barely recognized him because he had lost so much weight. He had taken his health results to heart and said Ana’s guidance helped him realize he had to make monumental changes in his life to get healthy.

“It means so much to me to know we made a difference in someone’s life, and he’s going to go on and spread the message to others,” she said.

Men’s Health Network fosters an open dialogue about how men can maintain a healthy lifestyle.

Getting healthy isn’t just something you do for yourself — it’s something you do for the people you love. You stay fit so you can seem attractive to your romantic partner. You keep your body strong and healthy so you have the energy to play with your children and can watch them grow up. Maintaining good health allows you to spend more time doing what you love with the people you love, and yet some people, particularly men, let serious health issues go untreated simply because they don’t know any better.

Men’s Health Network works to change that by making health information readily available to men, women, and children around the world. Its resources, including free clinics, online forums, and an informational library, can help men live longer, happier, and healthier lives.

Throughout the year, Men’s Health Network sets up free health clinics at sports games, churches, and other community events. The organization has health experts check people’s blood pressure, heart rate, body fat, glucose levels, and other health factors, and then they offer a report card discussing what the results mean. These screenings give patients a baseline and a general idea about what their health is like.

“Our mission is to reach out to men where they live, work, play, and pray,” Ana said. “We want to be that voice for men and raise awareness about their health issues.”

When you know what’s going on in your body, you can make informed decisions for the good of your long-term health. One man, prodded by his wife, came up to MHN at a Jaguars game in Jacksonville and got himself checked out. After seeing his results, he opted to skip the hot dogs that night.

Men’s Health Network raises awareness about the importance of being screened for testicular cancer.

Young men tend to think they’re invincible, but they can have health scares, too. Testicular cancer is most common among men between 15 and 35 years old.

Every year, approximately 8,850 men are diagnosed with testicular cancer, which accounts for about 1% of all cancers. An early sign is a painless lump in a testicle or a dull ache in the scrotum. Men should do routine checks while in the shower to make sure everything down there is A-OK.

Your sexual partner can help you keep an eye out for changes in your body. Sometimes you may not notice a rash or other concerning symptoms, so it helps to have someone else monitoring such subtle changes that could indicate a health problem, such as an STD. If you think you have a sexually transmitted disease, it’s vital to get it checked out as soon as possible because it could negatively impact your virility and fertility in the long run.

“You should be going to the doctor, getting screened for STDs, and taking care of yourself,” Ana said. “Just be aware that what you’re doing with your body will affect you later in life.”

Thanks to the internet and social media, Men’s Health Network now reaches more people than ever before. The nonprofit has over 63,000 followers on Facebook, Twitter, and Instagram. “We consider ourselves an international organization,” Ana said. “We have partners and followers all over the world.”

MHN unites people concerned about their health (or the health of a loved one) in an online support community of caregivers and patients. Working in partnership with Inspire and Theravive, Men’s Health Network gives people an outlet to ask sensitive health questions in an anonymous space. This is helpful for men who may be worried about a spot on their chest or a decrease in their sexual drive, but may not feel comfortable raising the issue at a doctor’s appointment.

“Our goal is to make sure we’re creating the most well-rounded patients who understand how their health affects other areas of their lives,” Ana said. “A lot of men don’t want to talk about erectile dysfunction, but they need to know what’s going on to decrease their blood flow.”

Men’s Health Network endeavors to stay on top of the issues that are most important to today’s men and women, so the team polls their audience every year to see what health issues are on people’s minds. In the last few years, mental health has been topping the rankings. According to MHN, “Depression is underdiagnosed in men. Men are over four times more likely than women to commit suicide.”

How Women Can Support Their Partner’s Health Goals

My mom is constantly badgering my dad to go to the doctor, and yet, whether it’s chest pains or a suspicious mole, he tends to shrug his symptoms off and wait for them to go away. That could’ve been a life-ending mistake in 2015 when he thought he had a sore throat, but he was actually having a three-day heart attack. Thankfully, my mom looked up the symptoms of a heart attack online and frightened my dad enough to go to the emergency room.

The MHN team is on a mission to reduce premature death among men worldwide.

Significant others can play a vital role in the health of their partners. They can sound the alarm and spot the symptoms before it progresses too far. They can advocate for proactive health measures and save a life by being vigilant.

Some men are unwilling to admit when they’re in pain, so it’s often up to their partners to advocate on their behalf and get them the treatment they need. In a survey of 500 male patients, 40% of men said they only visit the doctor for a serious medical condition, and 19% of men said they go to the doctor simply because their partner wanted them to go. They’re not in the habit of getting regular checkups, and so certain illnesses can go undiagnosed.

Ana said women make up 60% of the people who approach the Men’s Health Network table at health conferences. They show up looking for health information because they’re worried about their husbands, their brothers, their fathers, and their friends — and they’re not shy about seeking help. Their actions can push men to see their health in a new light and realize they should take steps to get their health issues under control.

“Men’s health is a family issue,” Ana said. “It’s something couples tackle together, so it’s important for women to support men and for men to support women in any way they can.”

Men’s Health Network provides ample resources to inspire men, like the patient Ana met in DC, to change their diets and exercise more often so they can get healthier and have more time to enjoy with their loved ones.

You can go online to do research about sexual health, cardiovascular issues, mental health disorders, and other health-related topics — or you can show up to a health clinic or conference in person to ask your questions. Whether you’re a patient or a caregiver, Men’s Health Network is a comprehensive guide for anyone seeking better health for themselves and their families.

Ana said the story of the man who lost weight and got healthy thanks to their DC clinics is a prime example of what Men’s Health Network can do for men. “Every year he came back looking better than he did before,” Ana said. “Our screening health fairs opened his eyes, and that means a lot to me. It means we changed someone’s life.”