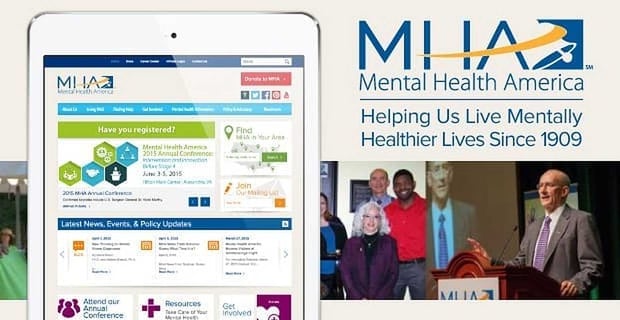 The 411: For the past 106 years, Mental Health America has been the nation’s leading non-profit committed to reducing the stigma around mental illness and promoting open dialogues, with a particular focus on the LGBTQ community.

Mental illness is often a sensitive topic that people would rather avoid discussing, especially those who are personally affected and fear judgment from others. It can be even harder for teens, in particular LGBTQ youth, who may already be facing discrimination for other reasons.

Mental Health America is there to make these conversations easier and provide the best resources and support you could ever find.

Not only is MHA celebrating its 106th birthday this year, but the respected organization is also celebrating Mental Health Month, a campaign they created 50 years ago with the hopes of encouraging Americans to openly talk about mental illness and live mentally healthier lives.

For more than 65 years, Mental Health America and their affiliates across the country have led the observance of May as Mental Health Month by reaching millions of people through the media, local events and screenings.

Much of MHA’s work focuses on promoting mental health as an important part of overall health, including prevention services, intervention tools, integrated care and a “Before Stage 4” philosophy — treating mental health conditions before they reach a crisis phase.

MHA was established by former psychiatric patient Clifford W. Beers. During his stays in public and private institutions, Beers witnessed and was subjected to horrible abuse. From these experiences, Beers set into motion a reform movement that took shape as Mental Health America.

“MHA was founded by an individual, so MHA tries to always focus on those individual rights when addressing mental health and mental illness,” said Erin Wallace, senior director of communications and marketing. “We try to balance what we advocate for and what we support based on what individuals with mental health concerns need. We need to focus on their rights as well as the rights of the overall population.”

Putting LGBTQ Youth at the Forefront

With the help of more than 200 affiliates in 41 states, 6,500 affiliate staff and more than 10,000 volunteers, MHA is able to stay ahead of the curve and make an impact at a state and federal level, including working to introduce legislation that would strengthen protection around LGBTQ youth who are in treatment.

“We know they are vulnerable and are not necessarily treated the way others are,” Wallace said.

In this same vein, MHA has created several public education campaigns over the years that focus on LGBTQ bullying and the impact it has on mental health, including depression and suicidal tendencies, which can often be magnified because this community has historically been discriminated against more often than non-LGBTQ teens.

According to MHA, LGBTQ youth are nearly twice as likely to be called names, verbally harassed or physically assaulted at school compared to non-LGBTQ peers.

And it’s that kind of discrimination that motivates MHA to keep evolving, including creating new online screening tools that help people look for signs of depression, anxiety, bipolar disorder and more.

Since the April 2014 launch of its online screening tools, MHA is seeing almost 1,000 screens being completed per day. While most of these screenings are geared toward adults, MHA also has plans for screens designed for youths and hopes to introduce more in the future.

“It’s certainly a population that can be more vulnerable to mental health concerns,” she said. “People are seeking answers, and what we would like to do moving forward is take that next step in helping them. We want to provide as many resources and as many avenues for them as possible to seek treatment.”

With Mental Health Month and their annual conference coming up in June, MHA continues to solidify itself as a go-to resource now and for years to come.

Their main goal going forward will be to encourage people to live with the “Before Stage 4” mindset, and they’ll do that by reviewing and possibly updating past campaigns, such as “What Does Gay Mean?”, and taking the mental health movement to a place where people address illness before it becomes a serious issue, which includes getting schools, law enforcement, peer groups and more involved.

“A lot of mental health symptoms happen for 10 years before there’s a psychotic break, before people do anything about it, and because it’s coupled with the stigma of mental illness, many people have been suffering silently for so long until something dramatic happens,” Wallace said. “One of the things that we’re emphasizing both from a communications perspective and a policy perspective is to focus on intervention and innovation before stage four and highlighting programs that get to the full spectrum of mental health.”