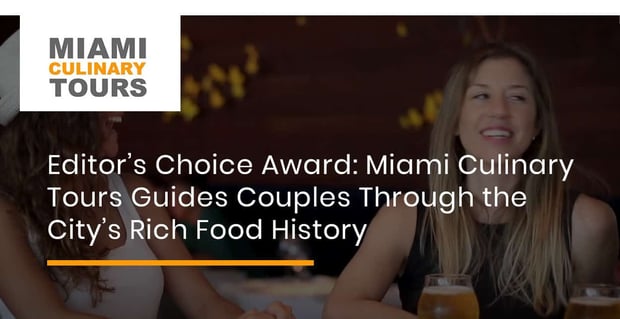 The Short Version: Miami is home to diverse cuisines that have created a unique melting pot of flavors. But when couples visit the city, they don’t want to search through thousands of restaurants to find the best ones. That’s why Miami Culinary Tours offers couples a taste of the city’s most delicious offerings from its best restaurants. Whether participants take the Little Havana Food Tour or the South Beach Food & Art Deco Tour, they’ll share food, drinks, and memories. For helping couples savor the rich history of Miami through its food, Miami Culinary Tours earns our Editor’s Choice Award.

Miami has long been one of the top food destinations in the United States. But visitors — or even longtime Miami residents — might not know where to find the city’s best mojitos or empanadas.

Couples who book spots with Miami Culinary Tours can quickly find those delicacies on their excursion — and start enjoying them. Participants spend two to three hours sampling food and learning about culture in some of Miami’s most established neighborhoods with the help of knowledgeable local guides. The Little Havana Tour, for example, is a walking and cultural tour of an area recently listed as a national treasure by the National Trust for Historic Preservation.

Even National Geographic recommends the Little Havana Tour for visitors to Miami who want to familiarize themselves with this area.

“Miami Culinary Tours is a great way to get a taste of Little Havana’s rich pickings. At Agustin Gainza Arts & Tavern, its mom-and-pop shop front typical of the low-rise buildings that run along Calle Ocho, you’ll find Gainza, an artist who’s shown his work all over the world, mixing mojitos behind the bar at the back of the gallery. It’s this kind of down-to-earth attitude that prevails in Little Havana,” Pat Riddell wrote in the article.

On the tour, couples can sample beef empanadas and café Cubano at El Pub before trying a Cuban sandwich at Old’s Havana. Then, they can move on to sipping mojitos and guarapo, a sugar cane juice, and savoring ice cream.

If they’re hungry for more after that tour of Little Havana, couples can book a spot on the Little Havana Culture & Bites Tour, an hour-and-a-half morning tour that beats the crowds that start to descend in the popular neighborhood after noon.

Participants also get to know more about their guides and fellow guests as they move from stop to stop.

“The tastings, historical stops, and our tour guides facilitate an ongoing conversation between all of our guests,” said Grace Della, Founder of Miami Culinary Tours.

The company’s variety of tours show couples a part of the city they may not otherwise see. For its dedication to offering informative, delicious cultural experiences, Miami Culinary Tours has earned our Editor’s Choice Award.

When she moved to Miami, Grace was introduced to Miami’s way of life almost immediately.

During her first week in the city, Miamians prepared for a hurricane. Grace sheltered with a colleague’s Cuban family. Through that family, she learned about some of the staples of Cuban cuisine, including café con leche and arroz con pollo.

“I was disarmed by my host family’s hospitality, comforting soulful Cuban cuisine, and their warm, cheerful culture despite the approaching storm,” Grace said.

In 2009, Grace founded Miami Culinary Tours to ensure that more people could enjoy that type of cuisine. The first tour she added was the Little Havana Food Tour, but she soon started taking participants throughout the city. From the beginning, these tours didn’t just take guests to restaurants but also ushered them through some of the city’s most noteworthy historical sites.

Now, she offers two tours of Little Havana, as well as tours of Wynwood, Coconut Grove, South Beach, and the Design District. Most tours also highlight the city’s art and artists. For instance, the South Beach Food & Art Deco Tour allows guests to sample different foods while exploring the neighborhood’s architecture and locations where famous movies were filmed.

The tour guides also provide guests so much more information because they have such a breadth of expertise.

“We are a diverse group of food lovers with a common passion for food and culture. Our group is composed of chefs, authors, bartenders, and world travelers,” Grace said.

Sample the City’s Cuisines and Cocktails

With its focus on food, culture, and art, it’s no surprise that Miami Culinary Tours has grown a significant following. Many participants on these tours are families or couples, though some singles participate, as well. Many come from the northern U.S. or Europe; and locals often bring out-of-town guests.

Taking a tour is one of the simplest ways to explore the culinary delights of many neighborhoods, as all of the food is included in the ticket price. In recent years, the company has had more bachelorette parties and group get-togethers booking its weekend tours.

Tour participants sample some of Miami’s best food and drinks as they learn about the city.

Guests appreciate the tours so much that they have helped the company achieve a five-star rating with more than 1,000 reviews on TripAdvisor. In fact, Miami Culinary Tours is the highest-rated tour operator in Florida.

“Our guide Willita (Spanish for tiny Will) grew up in the area and really knows the history of the Cuban food and culture even though he is not from Cuba himself. He gave us the history of each food item we were served before we ate it. We visited a number of local establishments and sampled a variety of Cuban specialties. The Cuban sandwiches were awesome,” read the online review.

For couples who want to have a similarly memorable experience, Grace has some suggestions. First, come to the tour both hungry and curious. She also suggests asking the tour guide what spots to check out afterward, as even a few hours in a neighborhood isn’t enough to explore its nooks and crannies.

While couples visit Miami Culinary Tours to try some of the city’s best food, they also learn plenty about the history of this unique city. And imparting that knowledge is clearly a part of the company’s stated mission: “Welcome with a smile, comfort with food, and fascinate with culture.”

Often, participants only make a quick stop at eateries on the tour. The tour stops serve as an introduction to the attraction or restaurant, encouraging couples to return later and take their time to learn more.

For instance, they may only spend 15 minutes at the Cubaocho Museum and Performing Arts Center on the Little Havana Tour, but they can see so much more on a return visit.

Though the COVID-19 pandemic has disrupted tourism to Miami, Grace and the Miami Culinary Tours team said they remain optimistic about the future of their business — and the restaurant industry in Miami.

“Although we are in the midst of the pandemic, we are looking forward to conducting tours to share our passion for Miami’s food and culture in the future,” she said.