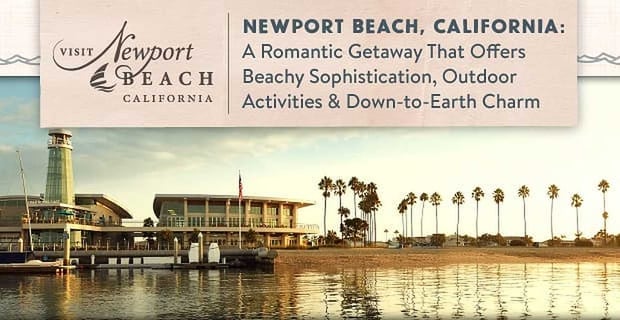 The Short Version: Boasting the largest recreational harbor on the West Coast, Newport Beach, California is more than just a surf haven. This sophisticated, yet down-to-earth, city on the Pacific Ocean offers everything from sunset cruises and wine tastings to harbor-front promenades, luxury shopping, and fine dining. Newport Beach’s 10 distinct neighborhoods has something for everyone. Whether you’re planning a romantic weekend getaway or week-long vacation, Newport Beach’s one-of-a-kind restaurants, festivals, and public parks can help you create lasting memories with your significant other.

Newport Beach, a coastal city in Southern California, offers visitors a quiet escape filled with elegance, adventure, and stunning ocean views. It doesn’t matter if it’s sunrise or sunset — any activity in this seaside destination is sure to inspire romance between you and your loved one.

“We definitely have beach-based activities,” said Sara Gorgon, Senior Director of Destination Storytelling for Visit Newport Beach. “But we also have an all-recreation harbor that’s our gem. We have shopping and dining and are comprised of 10 unique neighborhoods.”

Newport Beach gives couples a chance to get away and spend some quality time by the water.

Newport Beach became an important place for traders in 1870 when Captain Samuel S. Dunnells steered a 105-ton steamer named The Vaquero safely through its harbor. Word quickly spread that this hidden enclave on the Pacific Ocean would be the perfect location for a port.

Today, Newport Beach’s Newport Harbor is used mostly for recreation. Private homes and private docks occupy its shores. With a population at around 86,000, Newport Beach blends the feel of a sophisticated city with laid-back small town. From waterfront cafés and upscale shopping to surfing and bodyboarding, this coastal fantasyland is a top destination for couples and families.

From Fashion Island to Balboa Village, 10 Neighborhoods to Explore

“We have our Fashion Island area, which is a dining-retail hub,” Sara said. “One of the cool places is Lido Marina Village, which was resurrected from a fishing village used for commercial use with a cannery and boat-making facilities into shops and restaurants.”

The Fashion Island outdoor mall is a hub of activity for shoppers, diners, and sightseers.

“Balboa Island, which is kind of a star in the hub of Newport Beach, has a long history,” Sara told us. “The island celebrated its centennial in 2016. Its main street, which is called Marine Avenue, has boutiques, bookstores, eateries, and these amazing houses that are just gorgeous. It’s beautiful over there.”

Try Your Hand at the Various Recreational Water Sports

No trip to the Golden State would be complete without a little sun, sand, and surf. Newport Beach features one of the largest recreational harbors on the West Coast as well as 10 miles of pristine coastline where couples can surf, swim, and sunbathe.

Newport Beach has plenty of outdoor activities to float your boat. In fact, you can head to the Mariner’s Mile or Westcliff area to find boat rental companies (as well as Balboa Village). Sara recommended couples try Duffy Boats and go out on a date on the water. “Duffy Boats are original to Newport Beach,” she said. “You can pack lunch, bring a bottle of wine — even take your dog with you. They’re easy to steer because they’re electric, and it makes for a really nice day out on the harbor with almost year-round sunshine.”

On hot summer days, many Newport Beach locals and visitors get out on the water to soak in the sun.

Sportfishing is another popular water adventure in Newport beach. Couples can set sail from Davey’s Locker and have a chance to reel in yellowtail, sculpin, sea bass, perch, and rockfish in this angler’s paradise.

The Newport Paddle Company out of Balboa Peninsula and plenty of surf schools take people of all ages out on the water, so you can learn how to hang ten with your significant other. You can also take your date on a whale-watching excursion to blow them out of the water.

“Another fun harbor activity is a romantic gondola ride,” Sara said. “Gpndola Adventures Inc. offers a fun, little add-on where you can put a message in a bottle before the trip. When the unsuspecting person isn’t looking, the gondolier throws it in the water and then retrieves it for them.” Many couples have gotten engaged on these romantic gondola rides.

Known for its freshly caught seafood, Newport Beach is teeming with dining options. The city is home to Michelin-rated chefs, unique concept kitchens, and menus that feature farm-to-table dishes at waterfront restaurants.

Check out casual dining spots like Port Restaurant for globally-influenced cuisine or stop by Z Pizza for a slice. Newport Beach has plenty of different dining experiences to offer. Enjoy fresh seafood at Bluewater Grill, the Cannery Seafood of the Pacific, or Woody’s Wharf.

Some restaurants allow visitors to dock and dine, so you can cruise up to an authentic seafood place.

Newport Beach also entertains visitors with its public events and annual festivals. Southern California’s seaside oasis never falls short with romantic date ideas from the Newport Beach Restaurant Week, a 14-day dining event that showcases the area’s top restaurants, in January, to the the famous Christmas Boat Parade (2018 will be its 109th year!) in December.

Do you remember that scene from the first season of “The O.C.” when Ryan and Marissa shared their first kiss atop a Ferris wheel? Well, the show chose Newport Beach’s Balboa Village as its backdrop because of its romantic seaside locations.

“We have our coast, which is what people saw on ‘The O.C.’ with those big beautiful houses,” Sara said. “We also have Crystal Cove, a state beach with historic cottages from the ‘30s and ‘40s that was seen in the movie ‘Beaches,’ as well as The Beach Comber Café. At five o’clock, they have the martini bell, which is a fun thing. You can rent fire pits and have your meals out there.”

From eating frozen bananas on the pier to checking out places made famous by television and film, Newport Beach has thousands of date spots that conjure up conversation and create memories that last a lifetime.

“There’s this high tide, low tide sense of things in Newport Beach,” Sara told us. “It’s one of the per capita richest cities in California, but then you have some of the most relaxed, down-to-earth styles in that you don’t always know who has money. People roll up to seaside cafes in boat shoes and khakis. It’s not flashy; it’s more about the quality and style.”