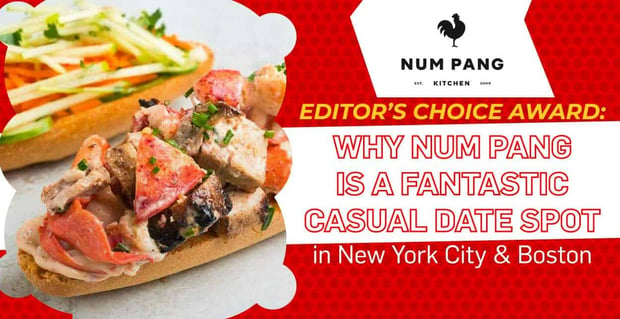 The Short Version: Num Pang has packed a lot of rich flavors into a small space. This chef-driven sandwich shop made a name for itself by serving unique, delicious, and affordable dishes inspired by Southeast Asian cuisine. The restaurant’s casual and funky atmosphere delights customers, and Num Pang has become popular among daters seeking a quick and fun meal on the town. Num Pang currently has seven locations in the U.S. (six in NYC and one in Boston) with plans to grow as more singles and couples seek out these sweet and savory dishes.

Emi H. is an active Yelp reviewer and foodie who often recommends new restaurants to her significant other. In 2012, her boyfriend decided to change things up by being the one to pick the restaurant for once. He suggested they visit a Southeast Asian sandwich shop called Num Pang for their next lunch date in New York City.

“This is so rare that I was extremely curious as to why he had decided upon this sandwich shop,” Emi H. recalled. “Well, let me tell you, folks, after biting into the five-spice pork belly sandwich at Num Pang, I’m not even sure if I can ever look at a regular bahn mi the same way again.”

Emi said she loved her meal so much that she regretted not knowing about Num Pang sooner. She compared it to dating threes her whole life, and then dating someone who’s a stone-cold 10. She didn’t know what she had been missing — and now she can’t live without it.

Since 2009, Num Pang has wowed many diners with its bold, Asian-inspired flavor combinations. From the Coconut Tiger Shrimp Pang to the Super-Grain Bowls, the restaurant has a little something for everyone, and its quick yet friendly service has made it a fast favorite among busy foodies in NYC.

Restaurant owner and chef Ben Daitz said he founded the shop in 2009 during the economic downturn because he wanted to bring some joy to his neighbors. “We were able to provide affordable, chef-driven food, and that’s what a lot of people were looking for at the time,” he explained.

Today, Num Pang has seven locations in the U.S. as well as a thriving catering business. Six of its sandwich shops are located in New York City, and the seventh is in Boston. Ben said he hopes to add a second (and third and fourth) location in Boston once the first one gains a good reputation in the city.

As a casual sandwich shop, Num Pang offers couples a chill date spot where they can enjoy delicious food, have a good conversation, and savor a five-star dining experience without breaking the bank.

“Num Pang has a pretty relaxed, urban feel to it,” Ben said. “It’s a fun, upbeat, and casual experience, but behind that is quality. The food comes first, always.”

It’s nice to splurge on fancy nights out on occasion, but, during their day-to-day life, most couples really just need a low-key Tuesday date spot to get them through the week. That’s what Num Pang is.

Num Pang is a lively and youthful sandwich shop where customers can relax and linger over good food. Ben described Num Pang’s overall vibe as “the opposite of corporate.” The decor is simplistic yet modern with graffiti and local artwork on the walls. Seating is plentiful, and there are specialty sodas and ginger beers in the fridge.

Num Pang is a colorful eatery known for its inventive Asian cuisine.

To add to the funky atmosphere, Num Pang plays hip-hop and reggae music. Num Pang also sometimes collaborates with local musicians to really put on a show, and often the proceeds go to support local charities. Ben said he jumps on opportunities to give back to the community.

The Num Pang menu has many sweet and savory dishes that you can’t find just anywhere. Chef Ben has made sure the menu can satisfy people of all eating habits and tastes. Health-conscious diners will love the kale salads and protein-packed grain bowls, while adventurous eaters can try a peppercorn catfish sandwich or a spicy Camobodian slaw.

“The food is really colorful and flavorful,” Ben said. “People usually have a reaction to it, which is a good gauge for getting to know someone.”

Num Pang is a common first-date spot because it’s not very serious, and the dining experience is quick and easy. You don’t have to worry about a waiter interrupting your moment or hurrying you along. Couples can stay as long as they like if the date is going well — or they can bail within 15 minutes if it’s not going so well.

If you’re a fan of Num Pang, you may want to consider downloading the restaurant’s app, which lets customers pay with their phones and earn rewards on every purchase. For every $88 you spend in the sandwich shop, you earn $8 toward your next purchase.

Creating Memories & Giving Back to the Community

There is no typical customer at Num Pang. People of all ages and backgrounds come together at this one-of-a-kind sandwich shop. You’ll see packs of college students at one table and a middle-aged working professional on a lunch break at another table. You’ll see an old couple sharing an appetizer in one corner, and a young couple making small talk on their first date in another corner.

Ben said he takes pride in providing a welcoming and wholesome space where people can eat good food and create special memories.

Over the years, Num Pang has gotten rave reviews from couples who have enjoyed casual dates here.

“When my boyfriend said we were going to check out a banh mi spot in the city, he had me at ‘banh me,'” said JEWELe M in a review. “Wow! The five-spiced pork belly was so fatty and delectable. I cannot wait to come back here and try the other sandwiches.”

While visiting NYC for a conference, Heidi J. and her husband discovered Num Pang and fell in love with its delicious food and fast service. Heidi said they got their food within 15 minutes and scarfed it down.

Paul M. and his boyfriend live close to one of Num Pang’s locations, so, instead of braving the crowd on their first visit, the couple grabbed sandwiches to-go and enjoyed a more intimate meal at home. “It was great,” Paul said. “Would eat here again for sure.”

In yet another five-star Yelp review, Edward O. described his Num Pang sandwich as “ecstasy on a roll.” He said his only regret was that his wife wasn’t with him to savor the experience with him.

Whether you’re going out on a lunch date or picking up a to-go dinner for two, you can count on Num Pang to deliver fresh and craveable foods that’ll make you wonder, “When can we come back here?”

Since opening its first location in 2009, Num Pang has started a flavor sensation in New York City and has managed to thrive in a famously competitive restaurant scene. Num Pang’s secret sauce has been its Southeast Asian flavors, which you can’t find just anywhere. The menu exceeds all expectations, highlighting fresh ingredients, authentic dishes, and quality food.

After eating at Num Pang with her boyfriend, Emi H. quickly decided it was her new favorite lunch spot. “Well, hot damn,” Emi wrote, “I do declare that I should make my BF pick the restaurants more often!”

Num Pang has grown from a humble sandwich shop in New York City to an award-winning restaurant with a national following. What’s next for Num Pang? Ben said he hopes to expand his restaurant’s reach and continue giving people a high-quality dining experience for a reasonable price.

“It’s been 10 years and seven locations, and I have no real plans of letting up,” he said. “It’s important to me to give back to the community in a fun way and create something delicious at the same time.”