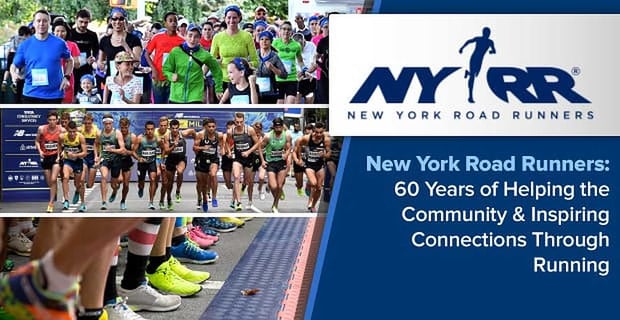 The Short Version: Over the course of its six-decade history, New York Road Runners (NYRR) has raised millions of dollars for worthy causes throughout the world. With its flagship TCS New York City Marathon and other popular races and events, the nonprofit community running organization impacts the lives of more than 430,000 people each year, nurturing its mission to use running to help and inspire. In addition to giving back to the community while doing something they love, runners have found NYRR’s events and programs ideal venues to connect with like-minded people who share a passion for altruism and racing. Whether you’re a dedicated marathoner or simply want to have fun and stay fit with others, NYRR can give you a reason to run and serve the greater good.

In 1998, Amy, a media research analyst, and Kenneth, a lawyer specializing in senior legal issues, were both professionals living separate lives in New York City. They both loved running and interacting with others, so they independently signed up for the same New York Road Runners (NYRR) class in Central Park.

Amy and Kenneth immediately hit it off and began dating within a month. After training together for close to a year, they completed the NYRR-organized New York City Marathon. And, just after crossing the finish line, Kenneth got down on one knee and popped the big question.

Amy and Kenneth aren’t the only ones with a touching story — people have been coming together and forming relationships through NYRR events for 60 years.

“We recently had another engagement between a couple who met at one of our NYRR Open Runs,” said Christine Burke, NYRR’s Vice President of Runner Products and Services. “It’s a really fun, inspiring story of two individuals who met each other through this event and bonded over a growing love of running.”

NYRR’s Christine Burke told us how the nonprofit’s events are ideal places to meet new people.

NYRR operates with a mission to help and inspire people through running and has raised millions of dollars for charitable causes throughout its long history. Today, the nonprofit serves upward of 430,000 people annually through programs open to runners of all ages and skill levels.

From free weekly runs organized in 13 parks around the world’s largest marathon, NYRR events offer ways to meet with other runners who also care about giving back to the community.

Bringing People Together Who Share a Passion for Running

In the past six decades, NYRR has grown from a local running club to a global champion of the running movement. As the world’s premier community running organization, NYRR creates opportunities for everyone — from beginning runners to the elderly and those at any ability level — to get involved in its programs.

The nonprofit’s mission seeks to foster a lifelong commitment to running while improving the health of the community. Whether the cause is for a New York City children’s charity or relief for hurricane victims in the Caribbean, the millions of dollars raised by NYRR runners have long-lasting impacts on hundreds of thousands of people throughout the world.

Start with Service, one of NYRR’s core values, centers on the philosophy to better lives and fuel positive change. And the running clubs, volunteer opportunities, training courses, and, of course, the famous TCS New York City Marathon, provide something for everyone.

50K+ Marathoners Dashing for a Worthy Cause

NYRR organizes what’s recognized as the most iconic and prestigious marathon in the world. The NYC Marathon has grown from a 55-person race in Central Park to an event that draws more than 50,000 participants from every corner of the globe. The marathon electrifies the city each year and creates what feels like a 26.2-mile block party.

Because it’s the most sought after race in the world, the number of entries is limited. However, running for charity gives runners a guaranteed spot and the opportunity to raise money for one of the 350 official charity partners of the marathon. Amonth those charity partners is NYRR’s own Team for Kids, a committed group of adult runners from around the world who add meaning to their miles by raising funds for NYRR’s Your and Community Services programs.

Bond With Others Over a Glowing Love of the Race

If you don’t believe a love of running can help you find love or enduring friendships, think again. Christine told us of people coming together through their shared interest in running and giving back.

“Our NYRR Open Runs are free, community-organized events that take place each week in 13 parks across the city. On Thursdays, for example, we see at least 100 people attend our 5K at Brooklyn Bridge Park. They run together and then mingle and get to know each other after the race,” she said.

“It’s really a win-win for everyone,” she said. “People bond and help strengthen their community at the same time.”

NYRR provides so many diverse activities that any type of runner can find a friend in a group. People can participate in various training programs, such as Deep Water Running or Yoga for Runners, to help them grow as athletes.

These group training opportunities, led by NYRR’s coaching team, offer camaraderie, coaching, and inspiration directly from other runners during the four different weekly sessions. Being a part of a group works wonders to improve your overall health and provides opportunities to meet positive, motivated people.

Robust Volunteer Program Where All Kinds of Relationships Blossom

For those who like to run but aren’t necessarily interested in competing, there are numerous volunteer opportunities available where people can better their community and meet others with similar interests.

“We curate opportunities for our runners to go into parks around the city to clean them up,” Christine said. “We’ve heard a lot of fun stories about the relationships that have blossomed out of those bonding activities.”

Whether cleaning up a park or handing out water at the races, volunteer positions can be a rewarding way to help a local neighborhood. For those who desire an even more active role with NYRR, volunteers can apply to its Leadership Program to become ambassadors for the nonprofit.

This position not only provides an opportunity to meet and connect with numerous volunteers, NYRR staff, and group leaders, it also shows a huge commitment to altruism.

NYRR’s 100 running clubs, each with its own history, purpose, and goals, are great ways to meet new people.

Clubs, like 3RunPL and Brooklyn Road Runners, are competitive and provide an outlet for serious runners to actively pursue races. Others, like Harlem Run and Black Men Run NYC, simply provide opportunities to socialize.

Some clubs work to achieve specific training goals such as preparing for triathlons. Other clubs, like Better Runners, are dedicated to running smarter. Many have their own Facebook pages and hold social events for members to connect when they’re not hitting the pavement.

Most clubs are free to join and some have minimal dues to cover expenses associated with entering or holding events. But one thing all the clubs have in common is they bring people together. And, with so many clubs to choose from, runners are sure to find a fit.

NYRR — Sprinting into a Future of Motivation & Activism

NYRR’s biggest ongoing goal is to increase its reach as an organization and encourage more people to run. Christine told us the team is working to combat negative perceptions about running among children and teens, who often have to do laps as a form of punishment at school.

“We just relaunched our youth program, Rising New York Road Runners,” she said. “It serves hundreds of thousands of schoolchildren around the country, providing in-school education programs. Our goal is to make running fun and interactive and to develop these young participants into strong, confident runners who find joy in being active.”

The youth program provides yet another example of how NYRR is bettering the New York City community and forging bonds. It’s because of programs like this, and the events held throughout the city, that people like Amy and Kenneth are forming strong, lasting relationships while doing what they love.