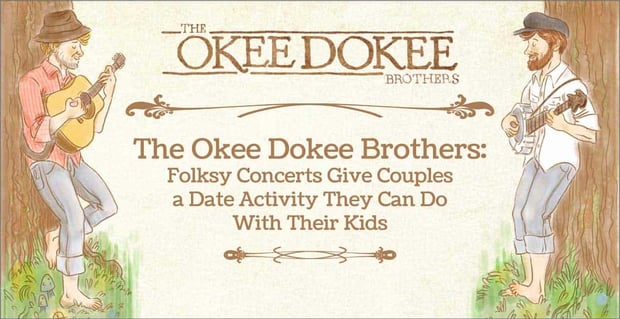 The Okee Dokee Brothers: Folksy Concerts Give Couples a Date Activity They Can Do With Their Kids

The Short Version: The Okee Dokee Brothers aren’t actually brothers, but they’ve known each other since they were 3 years old, so they figure that’s close enough. Singer-songwriters Joe Mailander and Justin Lansing have spent their lives roaming around the U.S. countryside and writing songs that evoke nostalgia, wonder, and laughter. This family-friendly folk band invites couples, parents, children, grandparents, and everyone in between to appreciate the wide open spaces within the country and the unbridled joy within our hearts.

Joe Mailander and Justin Lansing, also known as The Okee Dokee Brothers, grew up in Colorado where they fell in love with the great outdoors. The two boys always wanted to explore the mountains, deserts, and rivers of the West, and that’s exactly what they did once they were old enough.

In 2015, Joe and Justin saddled up for a month-long adventure traveling from Arizona to Wyoming. Their goal was to see as much of the West as they could. Throughout the trip, they marveled at the region’s iconic sights from the Rocky Mountains to the Grand Canyon.

This outdoor adventure challenged the two young songwriters to get out of their comfort zones and go hiking, canoeing, and horseback riding through red canyons, lush forests, and mountainous terrain.

Each new experience gave Justin and Joe inspiration for new folksy songs, and they frequently got out their guitars to sing about the horses, the campfire, the clouds, and the good old-fashioned feeling of being out West. They compiled all these original songs into “Saddle Up: A Western Adventure Album.”

“Joe Mailander & Justin Lansing are absolutely charming as the duo that bring such treasured songs that are equally captivating for children and adults,” said Ricky Kej in a review of the album.

It’s no secret that The Okee Dokee Brothers love horsing around and having fun, but they’re also serious about their music. They write simple songs that resonate with audiences young and old. The Okee Dokee Brothers pay tribute to their roots with their childlike compositions, and their live shows inspire a love of the West for a new generation.

“We try to capture our shared childhood memories of music in the outdoors and inspire people to step outside and get creative,” Joe told us. “Our music encourages participation and celebrating community.”

Couples who have children can get tickets to The Okee Dokee Brothers’ shows to treat everyone to a good time and create fond memories.

Justin and Joe sing about everything under the sun. The themes are simple, the rhymes are sweet, and the harmonious tunes will surely get stuck in your head. This dynamic duo know how to pull on the heart strings in a slow serenade, but they also know how to pick up the beat and get people dancing — and sometimes howling.

The Okee Dokee Brothers put on unconventional bluegrass shows that are pretty rowdy and involve lots of audience participation to keep children interested. The band has played their folksy songs for families from coast to coast. These shows can be great opportunities for couples with children to plan a date that’ll make everyone smile.

The Okee Dokee Brothers put on shows in cities all over the U.S.

“This is folk music geared toward kids and families, but we end up having fans from all ages and all walks of life,” Joe explained. “We draw from Americana genres, like bluegrass, old-time, and folk, but also genres like rock and pop, too.”

The Okee Dokee Brothers sing about life in the great outdoors, and they draw inspiration from their many outdoor adventures. Their repertoire of fun, touching, engaging songs encourage folks to sing along.

“They remind us of the American belief that we’re bound for better weather,” said Stefan Shepherd in an NPR review. “Their album celebrates everyday explorers — young and old — who rediscover that notion daily.”

The Okee Dokee Brothers have traveled all over the U.S. to see the sights, learn the ropes, and gain material for their folk songs. Justin and Joe have created an “Adventure Album Series” that represents a collection of three albums outlining three separate trips they’ve taken together.

“Can You Canoe?: A Mississippi Adventure” is the first album in the series. Joe and Justin wrote 15 songs inspired by a 2011 canoe trip on the Mississippi River. From “Campin’ Tent” to “Roll on River,” these songs tell of a wild ride through rough waters to the place they call home.

“We try to write songs that can draw in a 4-year-old and also have a level of meaning that can keep the interest of a grandparent,” Joe said. “Easier said than done! But it’s a fun challenge for our writing.”

Saddle Up for an Adorably Rowdy Jamboree

The Okee Dokee Brothers have performed at community festivals, schools, and state parks all over the country. Every performance is a little different because every crowd is a little different. Joe described their shows as “both cute and chaotic all at the same time.” You’ll often see children waving their hands or dancing while their parents tap their feet and clap their hands. It’s an engaging atmosphere grounded in warm-hearted family values.

The Okee Dokee Brothers started with a great friendship that grew into a beloved bluegrass band.

“We play live concerts that encourage participation and highlight videos from our month-long songwriting adventures on the Mississippi River, Appalachian Trail, Continental Divide, and the snowy north,” Joe said.

In the summer of 2019, The Okee Dokee Brothers will put on shows in California, Ohio, Minnesota, Nevada, and Virginia, among other places. Some of these shows are free to the public, while others are ticketed events. Check out the calendar to see when they’re swinging by your neck of the woods.

The Okee Dokee Brothers are always cooking up new adventures and writing songs with a little twang and a lot of humor. Joe and Justin capture a childlike wonder in their songs, and that joyous spirit captivates children who dream of exploring places unknown and living the American dream.

“The emails we receive after shows mean a lot to us,” Joe said. “We have many families tell us that we are providing the soundtrack to their kids’ childhoods.”

The Okee Dokee Brothers have spent years exploring the countryside and meeting people who share their appreciation for the outdoors and Americana. Justin and Joe sing about the pure and simple things that Americans can relate to. The duo’s touching yet lighthearted music offers a little something for everyone, and that’s what makes their shows a great date activity.

Whether they’re strumming on a banjo at a festival or singing on a horse in a grassy plain, Joe and Justin fill the air with harmonious music and transport their audience to another place and time. Their joyful jamborees can strike a chord with families who enjoy saddling up and settling in for a campfire adventure.

As the Okee Dokee Brothers sing: “There ain’t nothing like a good old friend. There aren’t many friends like you and me. We’ve got a lot of great stories, but I think we can all agree, ‘Yes sir, yes sir, those days were fine. Yes sir, yes sir, but these are the good old times.'”