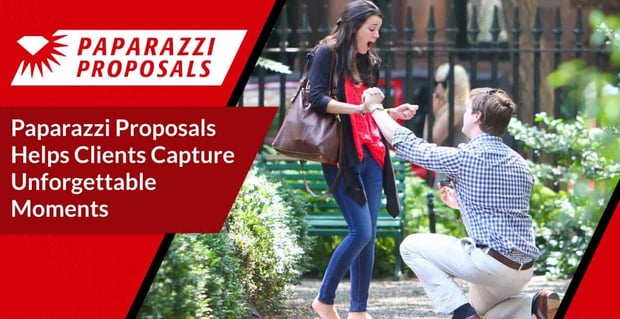 The Short Version: In the age of social media, nearly every element of love — from dates to weddings — is captured and shared with friends and family. But a marriage proposal is one memorable occasion that often goes undocumented — beyond an after-the-fact selfie. That’s why fiancés-to-be turn to Paparazzi Proposals to document their special moments in creative ways that capture the emotion of the moment without intruding. Couples can cherish the images forever and, of course, share them with their friends and family on social media.

Six years ago, Colleen connected with Garrett through a dating site, but it wasn’t a storybook romance at first. Soon after they first messaged each other, Colleen decided to take a break from online dating. When she returned to the scene, the pair reconnected. As they talked, they discovered they lived close to each other — and had even attended some of the same parties.

Garrett said he was smitten with Colleen’s excellent listening skills, encouraging attitude, and, of course, her curves. So, when he knew she was “The One,” he decided to propose with her favorite skyline, New York City, in the background. He got down on one knee in front of the Gapstow Bridge and asked her to marry him.

Colleen said “Yes,” and Garrett had the foresight to get the proposal captured on camera by professionals.

He put the special moment together with the help of Paparazzi Proposals. The company, founded by former paparazzo James Ambler, helps clients pop the question in unique ways and then documents the moment in a way that doesn’t interfere with the intimacy of the moment.

“I wanted to take my skills and experience of shooting under pressure and apply that to something that would bring a smile to people’s faces,” James said. “The reason I started this company was that I didn’t want to interfere in those moments.”

Many couples make sure they have stunning images of their weddings. But Garrett reflects a growing trend among prospective spouses who want to have photos of their proposal — which may be just as spectacular.

Modern proposals have become quite elaborate, with friends and family members often getting in on the surprise. No matter how many people are involved, couples often find it satisfying to have professional images of the occasion — beyond just a selfie showing the ring.

James used to be a photographer who followed celebrities as they came out of stores, walked to clubs, or roamed the beach with their families and friends. But he didn’t like working among that intrusive group — or even being the lone wolf hidden in the bushes — that is often viewed with contempt. So he took what he learned from his job and applied it to Paparazzi Proposals, where he could capture a couple’s joyous moments.

Many clients who are ready to propose may not want to brainstorm getting a photo of the event with friends and family to avoid word getting back to their special someone. While plenty of photographers are talented enough to take great pictures, not many are experienced at capturing the moment without being seen. But James and his team can do that.

In 2011, he began working alone with clients who were ready to ask their partners to marry them but weren’t sure of the best way to go about it. Now, he works with a trained staff of photographers throughout the United States who have mastered the art of discreetly capturing the exact moment when a client pops the question. Even better, they capture images of the reaction and stick around to take more shots of the happy couple.

“There’s no idea we haven’t heard of, or proposal we haven’t photographed,” James wrote on the Paparazzi Proposals website.

Still, even with hundreds of proposals photographed every month, James sees each one as a uniquely special moment that reflects each couple.

Experts Work With You On Every Detail of the Day

Clients begin the process by filling out a contact form on the Paparazzi Proposals website. The company designs its packages to take the stress out of a proposal, so that it can be more special — and memorable. Team members even offer free consultations to discuss creative and fun ways to propose.

They also have local knowledge and vast experience in making the moments perfect.

The site includes hundreds of proposal ideas and photos of other happy couples. There are Casey and Kristal, who said, “Yes,” at the Vista Point of the Golden Gate Bridge. Christopher and Neilina were all smiles with the Chicago skyline lit up at night in the background. Stephen and Becki were bundled up for the snow in Burlington when she accepted his proposal.

Paparazzi Proposals offers plenty of inspiration for stunning proposal locations on its website.

“She’s the first person that I’ve felt 100% comfortable with. I’ve never trusted anyone more than I trust her,” Stephen said in an online testimonial. “I know that there’s nothing I couldn’t tell her as well as there’s nothing she can’t tell me. I’m not sure that there’s a definitive moment, but there came a time when I would look at her and realize that I wanted to wake up next to her every morning for the rest of my life.”

James said his team loves coming up with an individualized approach for an otherwise traditional experience.

“Everything is tailored to the individual,” he said. “We know that no two proposals are the same. We work to do something with clients to find out what they really want. You don’t have to spend a lot of money on it. We make it personal and make it intimate to them.”

Paparazzi Proposals: Documenting the Romance From Any Angle

Paparazzi Proposals can range in price from less than $500 to more than $1,500, depending on the proposal’s complexity. Photographers may be stationed at every angle in hidden locations to document the moment, which is meticulously planned.

The client receives a map, diagrams, and directions for the exact location of the proposal. That information is also shared with the photographers, who will be staking out the shot. The rest of the day can be relaxed and enjoyable.

“We shoot with very long lenses, and from discreet angles, so your partner has no idea we’re there,” James said.

There’s also a fun “ring cam,” which is hidden in the ring box and is a great way to remember the recipient’s huge smile on seeing the ring.

The success of Paparazzi Proposals earned James a spot on the show “Shark Tank,” where he struck a deal with two of the Sharks who loved the idea. These television stars recognized how valuable it is for couples to relive their engagement while sharing the moment with friends, family members, and on social media.