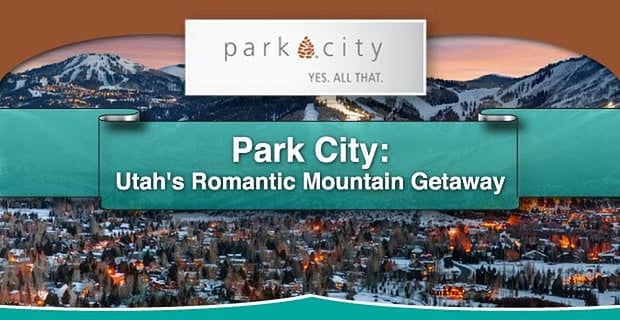 The Short Version:  Park City, Utah offers couples a charming — and surprising — experience, no matter the season. Skiing holidays and the Sundance Film Festival in the winter give way to brewery tours and biking in the spring. Music festivals in summer lead up to perfect cuddling weather in the fall. The historic town has options for every type of visitor, and it’s ideal for active couples who love the idea of a quaint mountain town that doesn’t require a car but does require a thirst for adventure.

After a short 30-minute drive from Salt Lake International Airport in Utah, visiting couples arriving in Park City may notice something right away: They don’t need a car.

“We have a completely free public transit system in town,” said Dan Howard, the Director of Communications for the Park City Chamber/Convention & Visitors Bureau. “You won’t need a car no matter where you’re staying.”

From the airport, visitors can hail a Lyft or an Uber — Park City was a test market for Uber Ski, so all the cars have four-wheel drive and ski racks — and begin their special getaway.

You don’t need a car to get around Park City, Utah, as it’s easy to navigate with free transportation.

Visiting couples will soon understand why this town of around 8,000 was named one of the prettiest towns in the United States by Forbes Travel.

Park City, incorporated in 1884, was built around silver mining. The historic downtown remains an authentic reminder of the past — as well as its difference from the rest of Utah.

“We have a beautiful Main Street, and there’s an ambiance that puts people in a really good mood,” Dan said. “It was a party town from its earliest days, because the miners would get their silver and go to downtown Park City.

“A lot of people are under the impression that Utah is no fun, but we have high-quality restaurants, and you can get a drink anytime, anywhere you want. It’s always been the party town of Utah,” he added.

Park City has a vibrant downtown area with plenty of spirits and fine-dining destinations.

Still, it’s a slightly more sophisticated crowd than a rowdy spring break-style vacation hot spot — so no need to worry that it’s too loud for a special night out. The refined yet relaxed scene is a big reason why the Sundance Film Festival has made Park City its home for 34 years. Accommodations range from quaint bed and breakfasts to ultra-luxurious ski lodges.

For a fun afternoon, Dan recommends a visit to the state’s first brewpub, the Wasatch Brew Pub in Sugar House, or the High West Whiskey Distillery. Stop in at the Saloon downtown for a tasting or two after an afternoon at Canyons’ Ski Beach — a hip spot located between the Red Pine Gondola and the Orange Bubble Express seat lift. There’s often live music, poetry readings, and craft beer to keep the party going on mild, sunny days.

Parties of two can plan romantic dinners at some of downtown Park City’s standout restaurants, like Tupelo, Firewood, and Handle — all on or near Main Street.

In the winter, skiing is the ultimate activity for active couples. Deer Valley Resort is considered the top ski resort in the west by SKI Magazine for its 101 trails and 21 lifts. It poses a challenge for every level of skier, along with its exceptional service and comfortable lodge. Park City’s other main resort, the Park City Mountain Resort, which includes Canyons, is also a favorite for couples and locals alike who love skiing in their T-shirts on sunny, spring days.

Dan Howard spoke with us about the wealth of activities for couples in Park City.

Would you rather enjoy a quiet day together on the water? Two blue-ribbon trout rivers perfect for fly fishing are within a short drive from Main Street. There are times year round, including spring, when you can ski in the morning and fish in the afternoon.

If neither skiing nor fishing are your thing, you can take one of Park City’s electric buses — they’re striving to go Zero Net Carbon by 2022 — to the Utah Olympic Park, where athletes from all over the world have trained since the town hosted events during the 2002 winter games.

“We’re also planning to host the Olympics again,” Dan said. “People can come here to watch Olympic athletes train, or they can go on the famous Comet bobsled and try it for themselves.”

Beyond the slopes, Park City boasts more than 300 miles of mountain biking trails and picturesque places for a jog or stroll.

Festivals and Fun to Remember

Of course, it’ll be a little more crowded during the Sundance Film Festival — but you’re sure to make memories if you love independent cinema. And since it’s such a busy time, be sure to book reservations well in advance of the annual 10-day festival in January.

“This is when Hollywood comes out to Park City, and it’s a really cool time for film lovers,” Dan said.

In the springtime, Park City hosts a free concert series called Spring Grüv, which also includes a popular pond skim competition featuring silly costumes and a lot of laughs. The fun continues into the summer, when the Utah Symphony moves up to Park City, and couples bring picnic blankets, wine, and snacks to enjoy everything from country music to opera to top 40 hits in the city’s amphitheater.

Summer is a great time to head down to Park City’s amphitheater for a concert.

“The summertime here is festival central because the weather is great, and the days are really long,” Dan said. “The sun does not set until 9 p.m.”

The Deer Valley Music Festival, a concert series that runs for 10 weeks each summer, attracts all kinds of musicians, while the Egyptian Theatre on Main Street features stand-up comedians and plenty of celebrity sightings. The Kimball Arts Festival, meanwhile, closes down Main Street to traffic during the first weekend each August.

“For a tiny town in the mountains, we have a lot of arts programming,” Dan added.

No Matter When You Visit, Park City is a Special Place

Couples flock to Park City throughout the year, whether they’re looking to ski, hike, relax, or experience the hustle and bustle of Sundance. The city has earned widespread acclaim for its winter slopes, outdoor activities in spring, and summer festivals.

However, for all the action of summer and the skiing in the winter and spring, Dan’s favorite time of year for couples in Park City is autumn.

“We call it the Fall in Love season because the students go back to school, and we have the most beautiful fall foliage. It’s a little quieter time for couples to be here doing nature hikes,” he said. “Park City is almost like four different cities, depending on the time of year someone visits. And they’re all really special.”