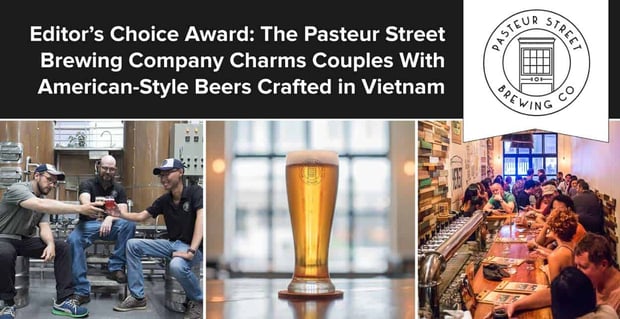 The Short Version: Pasteur Street Brewing Company (PSBC) brought a new flavor to Vietnam’s social scene by introducing American-style craft beers to bars, restaurants, and hotels across the country. The brewing company began as a humble taproom in Saigon in 2015, and now it has become the leading craft beer supplier in the East. In the wake of its unprecedented success, Pasteur Street Brewing Company has opened six taprooms and partnered with 400 locations to serve classic craft beer made with a Vietnamese twist. Now beer-loving couples can kick back with a cold one at a PSBC location and enjoy a date spot like no other.

In 2015, Pasteur Street Brewing Company (PSBC) caused quite a stir in Saigon, Vietnam, when it opened the city’s first American-style taproom.

In 2015, Pasteur Street Brewing Company started a beer revolution in the heart of Saigon.

The Original Tap Room & Restaurant on 144 Pasteur Street was meant to be a simple showroom where the brewers could host bar owners, managers, and other potential clients and build business relationships by winning people over with delicious pours. The Tap Room’s owners John Reid, Alex Violette, and Bethany Lovato didn’t expect many locals to stop by and want a pint as well.

However, the Tap Room’s grand opening proved Saigon residents had a great thirst for craft brews. Beer lovers from all over the city flocked to Pasteur Street, and the owners welcomed them with open arms. The Tap Room soon hired bartenders and kitchen staff to satisfy the needs of the many hungry and thirsty customers grabbing stools at the bar.

Pasteur Street Brewing Company’s consistency, dedication to quality, and stellar customer service have been essential ingredients to its success. Its cool, family-friendly vibe and delicious pours have attracted people from all walks of life.

“Being nimble early on was huge and because craft beer was so new to Vietnam,” said Mischa Smith, the Domestic Sales Director. “The success of the Tap Room was the proof that people needed to see that craft was not some passing fad.”

The Original Tap Room in Saigon is one of Pasteur Street Brewing Company’s most famous locations, and it sees a lot of tourist traffic during the day. Beer lovers come from far and wide to try its classic beers and see what seasonal favorites are on tap.

Some of PSBC’s other taprooms see more regulars and locals hanging out for an after-work beer. Located at 120 Xuan Thuy, District 2 is more of a beer hall than a taproom, and it welcomes a nice blend of American expats and Vietnamese customers.

The friendly and warm atmosphere at PSBC is ideal for daters looking to hang out.

The Hanoi Tap Room is in a tourist area, but many locals brave the crowds to have a beer here because it’s the only place in Hanoi where they can sample a variety of PSBC’s original brews. The brewing company has developed over 300 beers, and it keeps 12 on tap at all times. There’s always something new to try at the brewing company, and that keeps people returning week after week and year after year.

“Having the local community really embrace our style of craft beers has been great,” Mischa said. “Hopefully, we are fostering the next generation of Vietnamese brewers and craft drinkers.”

Pasteur Street Brewing Company has dozens of signature beers available at its locations, and the beer offerings vary from light to dark, sweet to sour, and fruity to hoppy. There’s a little something for everyone on the menu.

If you’re visiting a taproom for the first time with a partner, it may be a good idea to try a tasting flight and get a sampling of different beers. This option is great for sharing and learning what you like.

“Our greatest strength, to my mind, is the wide variety of beers on offer,” Mischa told us. “While IPAs are still the most popular style of craft beer in Vietnam, we certainly didn’t want to have a tasting flight of 12 variations of an IPA. Lighter beers, darker beers, stronger, sour, sweet, hoppy, they all sit beside each other on our board.”

Run By a Passionate Team of Beer Lovers & Foodies

Pasteur Street Brewing Company was founded by beer lovers for beer lovers, and the team is passionate about bringing American brewed classics to a Vietnamese audience.

With a combination of beer knowledge and hospitality experience, the PSBC team created a sure-fire business plan to put craft beer on the map in Saigon and beyond.

The PSBC brand has grown its reputation locally and internationally to become the top distributor of Vietnamese craft beers.

Today, the team’s creativity and passion continues to lead to exciting innovations in the beer flavors and styles.

“We all just really wanted to have a fun place where everyone could have fun and enjoy really great beers and food,” Mischa said.

The friendly and hip atmosphere at PSBC’s locations was designed to make everyone feel right at home. The bartenders go out of their way to get to know the guests, and they’ll often welcome regulars by name at the bar. PSBC has created a tight-knit, beer-loving community with its taprooms, and that community continues to grow each year.

Pasteur Street Brewing Company now exports its craft brews to Singapore, Malaysia, and the U.S., so worldly visitors can find these original flavors in their own hometowns. Looking to the future, the PSBC team intends to grow on both a local and international scale.

“Vietnam is our home, and it’s where we see, still, so much potential for growth,” Mischa said. “We want to open more Tap Rooms, and we want to get our beers out to every corner of the country that we can.”

Pasteur Street Brewing Company receives positive feedback from customers on social media — it has 4.8 stars on Facebook — and in person. Some customers say they tried their first beer here or enjoyed their first date with a partner here. Many wonderful stories and memories have been created at a PSBC location.

One man in his early 40s said drinking at PSBC actually helped his relationship with his wife because he no longer had to stay out drinking until 3 a.m. to get “properly drunk.” He could have a few pints at the Tap Room and leave satisfied by about 10 p.m. Now his wife didn’t have to stay up waiting and worrying over him — and they could enjoy their nights together.

In a TripAdvisor review, a Colorado couple said they were stoked to discover American beers in Vietnam and couldn’t say enough good things about the Original Tap Room. “We went to three breweries yesterday, and we feel PSBC has by far the best beers,” they said. “The staff is genuinely friendly and attentive. Keep doing what you’re doing!”

Three couples have taken their engagement photos at a PSBC Tap Room. Two of them were simply huge fans of the brewing company, and one of them actually met for the first time at the Original Tap Room on Pasteur Street. They came to the bar without a date and fell in love as they shared one round after another.

“It is always amazing to have people in Vietnam and people from around the world telling us their experiences of enjoying our beers,” Mischa told us. “It just never gets old.”

When beer lovers come to Pasteur Street Brewing Company, they should always expect the unexpected. The brewers bring a lot of interesting and innovative flavors to the table, and they give visitors the chance to explore new styles and tastes with every pour.

“Be prepared to be challenged. Come in with an open mind,” Mischa advised. “Some of our beers really push the boundaries of what beer can be.”

From the beginning, Pasteur Street Brewing Company has set itself apart by constantly devising new ways to craft American-style beers inspired by Vietnamese ingredients. Its bold and original brews have delighted customers who enjoy trying new things and sharing unique experiences with friends and family members.

Whether you’re on your first date or celebrating an anniversary, you can rely on Pasteur Street Brewing Company to create a fun and romantic backdrop while serving delicious beers that will have you hankering for more. Cheers!