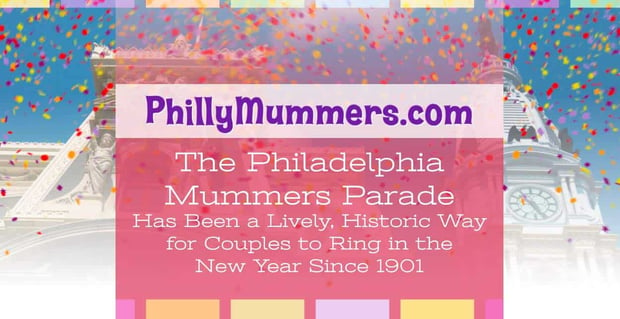 The Philadelphia Mummers Parade Has Been a Lively, Historic Way for Couples to Ring in the New Year Since 1901

The Short Version: Like many traditions in the historic city of Philadelphia, the Mummers Parade is one of the longest-running events in the United States. Though the parade officially began in 1901, the New Year’s Day tradition on which it is based started long before. Each year, the parade is a show-stopping event featuring more than 10,000 marchers, flashy costumes, one-of-a-kind musical numbers, and nearly 1 million attendees. Participants plan for the parade all year long, designing new themes, costumes, and styles to make each version unique.

On New Year’s Day 2020, Steve Coper will celebrate his 50th year marching in the historic Philadelphia Mummers Parade. While he has been involved in the event for nearly half a century, he was far from the first member of his family to participate.

“My uncle John got me started. He was also a mummer in the String Band, and he encouraged my mother to sign me up for music lessons so I could get involved, too,” he told us.

The word “mummer” derives from the German word meaning “masquerade,” which was an element of a tradition during the 12 days of Christmas. People dressed in costumes and visited their neighbors’ houses in disguise. Once inside, masqueraders — or mummers — would perform skits, tell jokes, or sing songs. The neighbors would then guess their identities and serve them food.

Steve traces the current Mummers Parade tradition back to the 17th century when Swedish immigrants brought it to Philadelphia. They called it Second Day Christmas, and celebrated with loud reveling that included costumes, noisemakers, and even pistols.

“It was revelers on the street, going from neighbor to neighbor, wishing them happy holidays,” he said. “The Old-World tradition came to Philly because it was such an ethnic melting pot, and all of these immigrants came to the city and blended their Swedish, English, Dutch, German, Irish Italian, and African cultures.”

The Mummers Parade has always fostered a sense of connection and camaraderie. Generations of couples and families have attended the event, celebrating a fresh start on what is often Philadelphia’s coldest day of the year. While countless couples and families attend the event, some even commit to marching together — which takes considerable time and energy.

That sense of entertainment and community connection lives on in today’s version of the Mummers Parade, allowing revelers — and those closest to them — to ring in the new year with a fun-filled experience.

New Themes Give the Event a Fresh Feel Every Year

Though the mummer tradition has been around for hundreds of years, the official Philadelphia Mummers Parade wasn’t sanctioned by the city until 1901, when it decided to make the event safer and more inclusive.

“The city wanted to get it under control because revelers were shooting guns in the air,” Steve said. “So, Philly decided to make the day more inclusive and family-friendly.”

Although the parade turns 120 in 2020, organizers and marchers keep it fresh each year by choosing different themes, costumes, and performances. Instead of cobbling together plans right before New Year’s Eve, the organizers develop ideas, raise funds, and practice all year long.

Marchers are split into five divisions: the Fancy division, the Comic division, the Wench Brigade, the Fancy Brigade, and the String Band — which is Steve’s division. As the names suggest, each group has a particular focus. For example, the Comic division aims to highlight current events to make people laugh while the String Band plays and drills to music.

The Mummers Parade includes five divisions and participants plan for the event throughout the year.

Each division has multiple groups. In the String Band division alone, 16 bands compete to win the best performance of the year.

“All the bands in our division are friendly, but we are fiercely competitive,” Steve said.

Each group competes to draw the attention of the nearly 1 million spectators by differentiating themselves through costumes and performances and also shaking things up from years past.

“Most of the themes are character themes, like clowns or pirates, but sometimes you’ll see themes that are more avant-garde, like presenting costumes and playing opera from the baroque era or something like that,” Steve said.

For instance, one group in the Comic Division has dressed like Minions from the movie “Despicable Me,” while a group from the Fancy Brigade dressed as identical Queens of Hearts for one year’s performance.

The Theatrical Performances Transform the Parade Into a Mini Broadway Show

Many parades include floats with local government or business representatives waving as they pass, but the Mummers Parade focuses on creating more lively performances, featuring dancers, musicians, skits, and jokes.

“We play a musical routine, we’re in lavish costumes, and we have props,” Steve said. “It’s an amateur, mini-Broadway show on the street.”

In the 2019 parade, a group dressed as police officers in frilly blue shirts and face paint danced to The Sugarhill Gang’s hit, “Jump on It.” Another group dressed in black and white strolled down the street waving parasols as clowns wearing bedazzled costumes with feathers entertained the crowd.

“We compete like teams on Super Bowl Sunday because we’re all performers and we enjoy performing for the crowds,” Steve said.

The parade has a unique theme each year, and participants can let their creativity shine.

Of course, not every spot along the parade route has as good a vantage point from which to watch these performances. Each group will give a full performance for judging at City Hall, but also stop at least four times along the parade route. So, purchasing judges stand tickets or setting up early at one of the designated performance locations is the best bet for couples looking to get the most out of the experience.

If you can’t make it out to the parade because you live out of town — or partied a little too hard on New Year’s Eve — you can also watch the live broadcast on TV or stream it on the internet. You can rest assured that each year’s Mummer Parade will be entirely different and exciting.

“The parade is very interesting and unique. There’s no other place in the world where you could see this kind of parade,” Steve said.

Around the world, German and Swedish cultures celebrate the winter solstice and mummer customs around the new year. Philadelphia, inspired by that history, has developed a tradition all its own.

“It’s one of the biggest folk cultures in Philadelphia,” Steve said.

The parade has also evolved over the years. Steve suggested visiting the Mummers Museum in South Philadelphia to see how the costumes and props that mummers used through the years have changed.

For the nearly 10,000 marchers who participate in the parade every year, this long-standing tradition remains a labor of love. There is no prize money, only bragging rights. During the year between parades, each group raises funds for its lavish costumes, props, and floats to create a memorable event. They also elect officers and create committees to develop themes that will stand out and please the crowd.

“We spend a lot of time developing our show to make it fun and pleasing to the people. We want to make sure the crowd really gets into it.” — Steve Coper, longtime Mummers Parade String Band participant

Though New Year’s Day is often the coldest day of the year in Pennsylvania, the parade still creates a lively and connected atmosphere that’s perfect for a date — or celebrating with the entire family.

According to Steve, all of the long-term planning and practice to make each parade special has one key objective.

“We spend a lot of time developing our show to make it fun and pleasing to the people,” he said. “We want to make sure the crowd really gets into it.”

In 2020, the Mummers Parade will be pulling out all the stops for its historic anniversary. Already exceeding expectations, the parade will certainly remain innovative for years to come thanks to the energy of the participants and spectators.

“We’re proud to keep this tradition alive,” Steve told us.