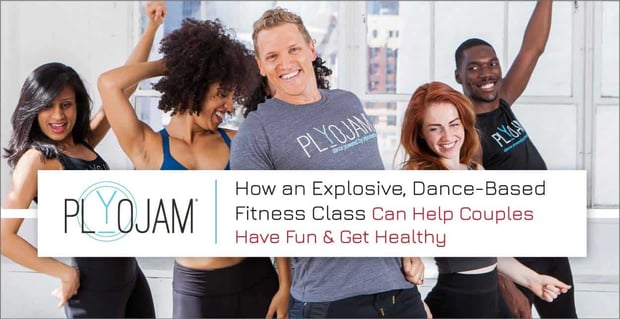 PlyoJam: How an Explosive, Dance-Based Fitness Class Can Help Couples Have Fun & Get Healthy

The Short Version: PlyoJam is an energized and intense dance workout that blends jumping exercises with short, explosive hip-hop moves. This uniquely engaging fitness program began in California in 2012 and has been sweeping the nation with its party-like online classes. If you want to lose weight with a partner, PlyoJam can make sure you stay on track and have a blast dancing your way to your health goals.

Celebrity dance fitness trainer Jason Layden started teaching cardio dance classes at a country club in Santa Monica to inspire locals to get healthy while having fun. His students soon began asking for more challenging regimens, so he upped his game by incorporating plyometrics, or jump training, into his dance workouts.

He called this fast-paced, high-energy program PlyoJam, and it quickly became a dance/fitness sensation.

After perfecting this new workout choreography, Jason partnered with one of his most passionate students Stacey Beaman (who lost 24 pounds in eight weeks using PlyoJam) to turn the dance workout into a well-known brand. They created online certification classes to teach fitness instructors how to lead PlyoJam workouts in their own gyms, dance studios, and rec centers across the U.S.

In 2019, Jason and Stacey launched online classes so health-conscious individuals, couples, and families could take part in PlyoJam workouts from the comfort of their own homes. PlyoJam members can log in anytime they want and start dance exercising along to instructive videos. Today, students in 27 countries and all 50 states have jumped in and joined the PlyoJam movement.

PlyoJam is a great way to give yourself a lot of cardio exercise and burn a lot of calories in a short amount of time. The workout is versatile enough to satisfy both serious athletes as well as unathletic beginners. You don’t have to be very coordinated or super fit to enjoy busting a move during these one-hour sessions.

“Stepping outside your comfort zone in a PlyoJam session can be really empowering,” Stacey said. “You have all this adrenaline going, and you get this feeling of accomplishment and pride when the class is through.”

As a special treat, the PlyoJam team is offering a discount for new students who enroll in the online classes using the promo code DATINGADVICE. So grab a workout buddy, get your dance shoes on, and have fun.

PlyoJam is a dance-powered exercise designed to yield fast results. Students build strength and stamina as they jump, kick, pop, and lock at home. The choreography is relatively simple and easy to follow, but it definitely takes a lot of energy if you’re doing it right. As PlyoJam’s website says, you train like an athlete and dance like a pop star.

Because of its explosive dance movements, these cardio workouts soon get people sweating, laughing, and feeling unstoppable.

PlyoJam workouts are accessible to everyone, and the instructors often suggest calorie-shredding modifications to make it more difficult, if that’s your thing. From start to finish, these intense classes pump people up and get them feeling great about themselves and their bodies.

During PlyoJam classes, people can shake off their cares as they shake their hips. The dance routines give people a chance to focus on doing something positive and fun. Couples who do PlyoJam together can hold each other accountable for sticking to the routine, reaching their fitness goals and honing their dance moves all at the same time.

Music is a major element in PlyoJam workouts. The music fuels every dance move and energizes people with their favorite tunes from Britney Spears’ “Work Bitch” to Drake’s “Nice For What.” The PlyoJam playlist is always changing to feature upbeat songs that get everyone moving, laughing, and enjoying themselves.

“PlyoJam is the soundtrack of your life. Every class is like a big party.” Stacey said. “It’s like going to the club without the tequila.”

Students Can Burn 800+ Calories in a Jam-Packed Hour

PlyoJam’s routines may be rigorous, but they’re also beginner-friendly. The fitness instructors make an effort to welcome people of all fitness levels in a judgment-free zone. Anyone can step up, jump in, and pick up the moves as they go. People as young as 18 and as old as 80 have taken PlyoJam classes to get fit. The hip-hop-inspired dance routines appeal to people from all walks of life.

James Corden and his wife even took private PlyoJam classes together in Los Angeles and have been high-profile advocates for the “sexy bum workout.”

James Corden treated the cast of “The Late Late Show” to a workout.

Some couples enroll in PlyoJam because they want to lose weight. Other couples do PlyoJam workouts as a date night activity because its intimate dance routines help them feel more energetic and healthy.

Elena S. said her husband turned her on to PlyoJam in 2016, and she has been a loyal acolyte ever since. “I love every class and look forward to the next,” she wrote in a Yelp review. “I can’t dance to save my life, but this class is so much more than that!”

“The hour zooms by because you’re having that much fun,” said Monica Q., a self-professed PlyoJam junkie. “You leave feeling amazing and ready to conquer the weekend. If you’re looking for a great workout, a great time, and some good music come try it out.”

PlyoJam has attracted many fans over the years because it’s an incredibly fun and active workout that yields great results. Clients have reported losing anywhere from 700 to 1,000 calories in a single hour.

“PlyoJam totally delivers,” said Elaine. “Not only do you get a great workout, but the good vibes are contagious. You dance, you sweat, and you smile — and you can feel the endorphins coursing through your body for hours afterward.”

PlyoJam is an intensive workout designed to burn calories and build strength. Every class fosters an electric energy that centers around music and movement. Even if you’re not a great dancer, you can still have a fantastic time jumping around and working it out.

Thanks to PlyoJam’s online classes, people all over the world can become healthier and happier one jump squat at a time. Expert choreographers have created an array of unique workouts packed with seamless dance moves and exercises. These highly engaging classes motivate singles and couples to swivel their hips, pump their fists, stamp their feet, and kick their workout routines up a notch.

“PlyoJam is so fun and so effective,” Stacey said. “It’s about finding joy and healing in dance. We love to see how people have embraced it, and we hope to continue spreading the message that dance cardio is for everyone.”