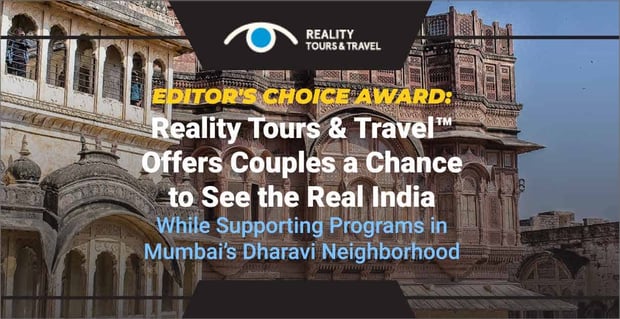 The Short Version: For couples who want to explore off-the-beaten-path destinations in India, Reality Tours & Travel provides them with a unique experience. In 2006, the company launched and started offering tours of the Dharavi slum in Mumbai. However, rather than focusing on poverty and deprivation, the tours center on the local community’s strength and hope. Now, more than a decade later, Reality Tours & Travel offers similar tours around the country to show a different side of misunderstood areas in India, while raising money for the education in slum communities. For providing couples with an authentic view of India, Reality Tours & Travel has earned our Editor’s Choice Award.

Couples who visit India often want to see a side of the country beyond the popular — and crowded — tourist attractions. They want to experience other areas that most visitors never get the chance to see.

That’s why Reality Tours & Travel began offering tours of Mumbai’s Dharavi slum. Though Mumbai is India’s financial capital, the city is home to the sprawling slum, where more than 1 million people live.

Many tourists have expectations of what they’ll encounter in the area, but Reality Tours & Travel, which was founded in 2006, provides them with an entirely different perspective.

“In Dharavi, there is a strong sense of community, and there’s a lot going on, including recycling businesses. There are more than 10,000 small-scale operations in the area,” said Krishna Pujari, Founder of Reality Tours & Travel.

On your tour, you get to see many of these operations in action. You’ll visit small manufacturers who make pottery, leather goods, embroidered pieces, and bread, among other foods. You can also see how the residents of Dharavi live and visit some of their diverse places of worship. In addition, you can add more local flavor to the tour by having lunch with a local family, learning to make pottery with a resident, or taking a street art walking tour.

After the tour, many participants have a different perspective on India — and the lives of those in its slums.

When Krishna began offering Dharavi tours in 2002, enlightening tourists about everyday life in India was his goal. He wanted individuals, couples, and families to see a different side of the country and expand their trips beyond the typical attractions.

He also wanted to give back to the Dharavi community. Today, 80% of the proceeds from the tours are invested in the slum communities through local programs.

It wasn’t always Krishna’s goal to offer tours of lesser-explored parts of India. But 15 years ago, while working in a bar in a touristy part of Mumbai, he met Chris Wray, a British national who was in India to teach an English class.

“He said he was volunteering at a school teaching the children. I liked that, so I told him he could join us for our cricket matches every day,” said Krishna.

Chris was familiar with slums in Rio de Janeiro, Brazil. The tours he had taken there opened up his perspective about everyday life in those areas and how vibrant they could be. Chris told Krishna that they could offer similar tours in Mumbai.

People can tour the Dharavi slum in Mumbai, which is home to more than 1 million people.

Krishna agreed. He had seen so many tourists who had not experienced India outside of tourist attractions, and he thought that Chris might be onto something.

So Krishna started talking with Dharavi residents to see if they’d be amenable to his plan.

“We explained to people that we wanted to give back to the community and show the positive side. I spent more than a month speaking to people in the slum every day,” Krishna said.

Eventually, he convinced the residents that his tours would benefit them. Not only would community programs receive funding from tourism, but they would also give tourists a new perspective on life in a slum.

“When you think of a slum, you may think about poverty, high crime, or truancy. On our tours, we show tourists that slums are much more than that,” he said.

Singles, Couples & Families Embark on Adventures With a Mission

The Dharavi tour proved to be so popular with tourists that Reality Tours & Travel expanded its operations across the region — including to Nepal and Sri Lanka. Couples can embark on street food tours where they sample Indian cuisine or learn the history of local markets and temples. They can learn how to cook Indian food with local families around.

The company also sticks close to its roots, as participants can still visit Dharavi or the slums in Delhi, called the Sanjay Colony.

The company’s staff has also expanded. When Reality Tours & Travel began in 2006, it employed four people. Now, it employs more than 100 people as administrators, travel planners, tour guides, and teachers.

All of these guides wear jackets that say “See the Real India,” which reflects the company’s mission from its outset.

Reality Tours & Travel continues to support initiatives in the Dharavi slum, as well, through its Reality Gives organization. Most of the company’s profits go back to community programs, one of which is schools for children in Dharavi. Women, most of whom are from Dharavi, work as teachers in these schools.

“We train them to be our teachers. And if they weren’t teachers, they might not have other job opportunities,” Krishna said.

In addition to these schools, Reality Tours & Travel also funds other organizations in Dharavi, including the Girls Football for Development Program and the Boys’ Cricket Academy.

The company also enables Dharavi youth to learn vocational skills through its Youth Empowerment Program. According to Krishna, every three months or so, 25 to 30 young people participate in the program to learn English, computer skills, and other proficiencies needed for professional life.

A tour of Dharavi provides tourists with a completely different view of the country — and perhaps even their own lives. People in Dharavi pay as little as $4 a month for their dwellings, and many of the streets are cramped.

At the same time, residents make the best lives they can for themselves. Collectively, they generate $650 million annually through their small-scale operations.

“When people take the tour, they realize that the slums are different than they thought,” Krishna said.

Krishna recommends that couples see India with the help of Reality Tours & Travel. Once, he even arranged a couple’s engagement at one of Mumbai’s beautiful temples.

All types of couples are welcomed, including LGBT couples, who Krishna said should feel safe to be themselves when booking with Reality Tours & Travel. The company’s fundamental values help tourists who have not seen the real India feel secure and taken care of. Some of those values include helpfulness, reliability, and honesty.

Perhaps most of all, Reality Tours & Travel wants to add value to the experiences of tourists. The sights, attractions, and interactions its tours provide are wholly different from anything people would find in a guidebook.

Beyond sharing more of the country he loves, Krishna said he is proud to give back to Dharavi. After all, it’s the community and welcoming attitude of Dharavi’s residents that made Reality Tours & Travel successful in the first place.

“I love seeing the increased confidence in all of the people we help,” Krishna said.