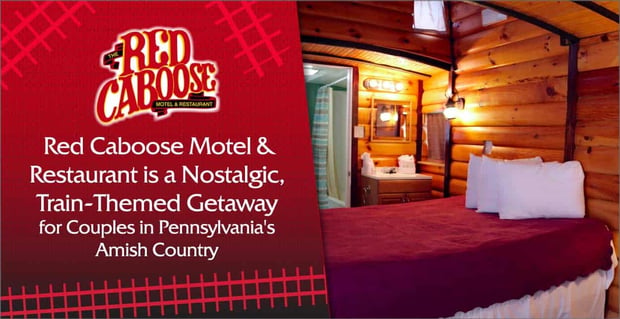 The Short Version: The Red Caboose Motel & Restaurant has been serving train-loving individuals, couples, and families near the Strasburg Rail Line in Pennsylvania since 1970. However, the team says the property isn’t for the faint of heart. With 9 acres and now 38 cabooses (plus one mail car, one baggage car, a farm house, and a restaurant), it takes a very special and dedicated person to maintain and breathe life into the property. Enter the Prickett family — father Todd, son Tyler, and their wives Debra and Kat — who purchased the motel and rose to the challenge of refurbishing the cabooses and the restaurant. The family continues to make improvements and introduce more people to The Red Caboose’s unique rooms, restaurant, and connections to railroad history.

The Red Caboose Motel & Restaurant has become a popular destination for train-lovers over nearly five decades of operation, but it almost never came to be. When the original owner, Donald Denlinger, saw 19 surplus Pennsylvania Railroad cabooses up for auction in the summer of 1969, he put in a modest bid.

Six months later, that bid was accepted. And the rest is history.

In 1970, Donald converted the cabooses into cabins, and he used the cabins’ connection to railroad history to attract train aficionados from all over. When The Red Caboose Motel opened in May 1970, more than 4,500 people toured the updated train cars in the first five hours. Over the next nearly 50 years, countless individuals, couples, and families have made the pilgrimage to rural Ronks, Pennsylvania, to stay at The Red Caboose.

“Our location is unique in that it’s train cars,” said Kat Prickett, Red Caboose Co-Owner and Marketing Manager. “Lodging is both the destination and the attraction, not just another place to lay your head at night.”

Over the years, the cabooses have needed considerable maintenance. The original owners couldn’t keep up with the necessary work on the property, so they began searching for someone who could.

Luckily, the Prickett family — father Todd, son Tyler, and their wives Debra and Kat — purchased the motel and rose to the challenge of refurbishing the cabooses and the restaurant.

“We took over in February 2016, and we’ve been working hard to restore the 50-year-old property,” Kat said. “The cabooses being in the elements all this time means they needed some love. We also took the restaurant back under the umbrella of the motel and re-branded it as Casey Jones’ Restaurant.”

The Red Caboose isn’t just 19 cars anymore. Over time, the establishment expanded to 38 cars, including a baggage car, a mail car, and two large dining cars that seat up to 150 people. Kat said visitors enjoy that all of the cars still maintain their Americana style and character.

“We’re trying to provide a lasting experience for every guest, every time,” she told us. “We want to send people out with a great memory with their loved ones.”

An Engaging Atmosphere for All Ages

The Red Caboose Motel & Restaurant sits on nine acres of land in Amish country, so most guests who book with the hotel visit to experience the property’s charm.

The motel offers plenty of one-of-a-kind experiences. Each guest room is located in a caboose that maintains the train car’s original character. For example, most roofs are curved, indicating the car’s former life on the railroad. Each room has a unique design and its own name, as well, including the Double Double Caboose, the Small Family Caboose, and the Queen Couples Caboose.

People who stay at The Red Caboose certainly aren’t roughing it, though, as the rooms come with refrigerators, microwaves, flat-screen TVs, and wifi. Many people choose to stay for special occasions, and a couple celebrating after getting married might choose to stay in the romantic Honeymoon Caboose.

“It has a queen bed and a jacuzzi and a small deck on the back. People book that for special occasions,” Kat said.

The Prickett family bought The Red Caboose Motel & Restaurant in 2016.

The people who stay at The Red Caboose aren’t of a specific demographic or age category. Instead, the motel attracts people of all ages looking to celebrate their milestones — or bask in the history of the railroad.

One couple who celebrated their honeymoon at The Red Caboose in 1984 recently returned to the motel to celebrate their 35th anniversary.

“Our stay with you in September was one we will never forget. The accommodation was great and the food excellent. We hope to return again,” Warren and Beverly, a couple from Australia, said of their experience.

The staff is also happy to help facilitate surprises for guests — for example, if a spouse wants to celebrate a special occasion with balloons, wine, or cake.

“Since we’re family-owned and operated, we’re accessible. If people have an idea, they can get in touch with us and make it happen,” Kat said.

Further, The Red Caboose’s nine acres provide guests with much more to do than celebrating train history. Other attractions include a petting zoo, buggy rides, and a viewing tower couples can climb to see the countryside.

The Pricketts have been able to restore several of the cabooses so far, working on a few every year, while others have received new bedspreads, curtains, and fresh coats of paint. But they’re far from done.

“There are always great things in the works. We’re constantly working on restoring things and keeping them in good shape for generations to come,” Kat said.

The Red Caboose Motel is in a rural area, but couples don’t have to drive into town to get a bite to eat. The Pricketts have restored the Caboose’s original eatery, renaming it Casey Jones’ Restaurant.

“It’s now in two passenger cars that once rode the rails of the Pennsylvania Railroad,” Kat said.

Kat recommends couples not leave dinner at the restaurant without enjoying a slice of crumb cake.

“We use my grandmother’s recipe, and I bake every single one myself,” she said. “It won first place in our state farm show. We’re always selling out of it, so you have to try it when you’re here.”

The restaurant is also open for more casual breakfast and lunch service, and offers an all-day brunch menu. One of the staples of this menu is the Maine French Toast, stuffed with cream cheese and either blueberries or strawberries.

“It’s fun to eat at the restaurant because both the cars have great views of the Amish country and the sunset and the Strasburg Railroad,” Kat said.

The Red Caboose keeps the nostalgic spirit alive in every part of its establishment, as well. Kat said the team has opportunities to let their personalities shine through while at work.

“Our front desk staff dress like conductors, and our maintenance workers dress like engineers,” she told us. “Our restaurant waitstaff are dressed like those you would have seen in the old days on the railroad.”

The idea is to bring guests back to a time when train travel across the United States was more upscale and inviting.

Guests who stay at The Red Caboose are certainly fans of trains, but many of them are also interested in train history — which is why they choose to stay near the Strasburg Railroad, the United States’ oldest railroad line, which opened in 1832 and has been operating ever since.

The Red Caboose gives train lovers the chance to be up close and personal with unique trains. For example, in fall 2019, guests can see an engine that will be riding the Strasburg Rail Line for six weeks, the Norfolk & Western Class J steam locomotive #611.

“It’s the Super Bowl for train enthusiasts because there are photo opportunities and chances to ride the train,” Kat said. “We’re already sold out for one weekend.”

During their time as owners of The Red Caboose, the Pricketts have updated the historical location while also making it their own.

“We feel like we’re part of something special and unique,” Kat said. “We get to impact everyone’s lives, even if that means we get to help them have a better day.”