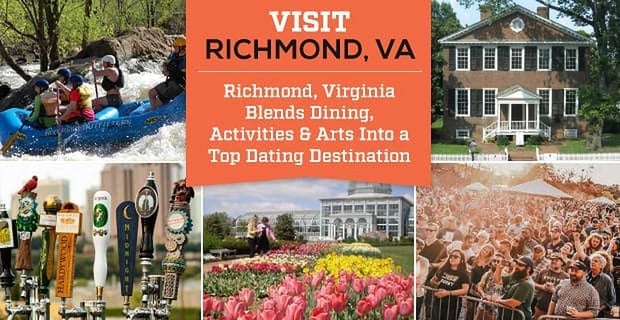 Richmond, Virginia Blends Upscale Dining, Outdoor Activities & An Eclectic Arts Community in One of the Best Date Destinations in the Nation

The Short Version: Known as the Capital of the South, Richmond, Virginia, has a colorful history dating back 400 years — but that doesn’t mean this Southern metropolis is stuck in the past. Richmond is a vibrant city with more than 30 craft breweries in the area as well as some of the best restaurants in the country. The city’s homegrown startups, public art installations, and outdoor activities are enough to keep the most adventurous couples on the move. All in all, it’s easy to see why the capital of Virginia is one of the best date destinations in the nation. Book a long weekend or week-long getaway to the River City — you’ll be glad you did.

The city motto of Richmond, Virginia, is Sic Itur Ad Astra, which is a Latin phrase that means, “Thus do we reach the stars.” Since its founding in 1607, Richmond has been reaching for the stars. As the Capital of Virginia, this riverfront metropolis is at the forefront of the state’s commerce, innovation, and decision-making. It’s also a thriving cultural hub full of posh dining, outdoor adventures, and a wide-ranging arts community.

The Richmond Metropolitan Area has a population of over 1.2 million people. This city, known as the Capital of the South, has become a favorite historical destination for weekend and week-long getaways.

“Richmond is unique in that it has Class III and IV rapids running through its downtown, so activities like kayaking, paddleboarding, and rafting are very popular,” said Meghan Gearino, Public Relations Coordinator for VisitRichmondVA.com. “Festivals are great for dates, and Richmond is not short on festivals. We’re also a burgeoning arts town with galleries all over.”

Couples can enjoy countless date activities in Richmond’s scenic waterways and at its unique restaurants.

Located along the James River, a 348-mile-long river that forms in the Appalachian Mountains, Richmond’s major suburbs include Midlothian to the southwest, Chesterfield to the south, Varina to the southeast, Sandston to the east, Glen Allen in Henrico County to the north and west, Short Pump to the west, and Mechanicsville to the northeast.

Richmond has no shortage of great date ideas — whether it’s visiting one of the more than 30 craft breweries in the region, planning an outdoor activity along the Virginia Capital Trail, or exploring world-class museums (like the Virginia Museum of Fine Arts or the Valentine).

Named the Best River Town by Outside Magazine, Richmond (or RVA as it’s known by the locals) abounds with outdoor fun on the water, on the trails, and in every nook and cranny of the natural resources surrounding the vibrant city.

Couples can spend a day on the water on a kayaking, paddleboarding, or rafting excursion. “Riverside Outfitters offers guided tours down the James River, and those activities also include lunch,” Meghan said. “The Virginia Capital Trail is a new bike and pedestrian trail that runs from Richmond to Jamestown, and couples can rent electric bikes from Pedego RVA to bike the trail. If you get too tired to ride back, the Cap Trail Bike Shuttle is there to pick you up and shuttle you back.” Basket & Bake also offers Cap Trail tours along with meals and/or wine tastings.

The Virginia Capital Trail takes bikers and pedestrians along the historic Route 5 corridor.

Other popular outdoor activities include tubing and swimming in the river, hiking Forest Hill Park trails that connect to Buttermilk and North Bank, and mountain biking on the James River Park System and Pocahontas State park trails. The area is also a sought-after locale for golfing, motorsports, fishing, disc golf, eagle watching, and BMX.

“Triangle Rock Club is opening soon in Richmond,” said Meghan. “It’s an indoor rock climbing facility that is a great date spot. We also have outdoor rock climbing at Peak Experiences and Manchester Climbing wall, which offers a unique chance to climb with the city skyline as a backdrop. You need a partner to rock climb, so it’s a fun way to get to know someone new or strengthen an existing relationship.”

Fodor’s Travel recently named the Richmond region one of the 19 U.S. Cities With an Unexpectedly International Foodie Scene, and it’s not hard to see why. The city is brimming with everything from farm-to-table cafes to Asian fusion restaurants to New-Zealand-influenced eateries.

“Brenner Pass is a new restaurant with an Alpine-European theme and a really great bar program. The chef, Brittanny Anderson, also owns another restaurant, Metzger Bar & Butchery, which is a German restaurant,” said Meghan of the wide range of ethnic culinary influences. “Perly’s Restaurant & Delicatessen is a traditional Jewish deli located downtown, and Craft Kolache in the Church Hill neighborhood makes Czech kolache pastries for breakfast.”

“For a fancy night out, start with drinks at the Five-Star, Five-Diamond historic Jefferson Hotel,” Meghan told us. “Walk over to Rappahannock for some local Virginia oysters ,and then head to dinner at L’opossum.”

Friday Cheers, a concert series in the summer, is an exciting place to find romance in Richmond.

The Richmond Beer Trail showcases the flavors of the 30 craft breweries in the area. Scott’s Addition neighborhood has a large concentration of breweries as well as several distilleries, cideries, and a meadery — so it was a natural choice for a beer trail, which makes for a fun and tasty date idea. Check out Hardywood Park Craft Brewery, Buskey Cider, and Black Heath Meadery while you tour Richmond’s fastest growing neighborhood.

Annual festivals are prevalent in Richmond’s bustling arts and culture scene as well. Every summer, Friday Cheers runs from May through June and features concerts on Brown’s Island, which overlooks the James River. Couples can also attend Virginia Pride in late September, the Richmond Folk Festival in October, and Fire, Flour & Fork, a four-day gathering for the foodies in November.

From five-star historic hotels to waterfront boathouse restaurants, Richmond has no shortage of romantic venues where you can say “I do.” According to The Knot, there are more than 837 wedding reception venues in the region, including farms, wineries, science museums, and mountaintop resorts.

“Libby Hill Park is a popular place to get engaged,” Meghan said. “Some of our beautiful wedding venues in the region include Lewis Ginter Botanical Garden, Maymont, Blue Bee Cider, a cidery, and Upper Shirley Vineyards.”

For local wedding vendors, check out florists like Vogue Flowers, Strawberry Fields Flowers and Finds, and Flowerama Richmond. Brides can choose from a selection of boutiques, including Annalise Bridal Boutique, Mila Bridal, and Urban Set Bride, for one-of-a-kind bridal gowns and accessories, too.

Richmond: A Charming Town on the James River

According to the National Trust for Historic Preservation, the James River has been the site of significant historical events since before the founding of the United States. It served as the site of the first permanent English colony in America in Jamestown in 1607. Today, the river is central to Richmond’s success as a bustling arts and culture scene.

“We’re an outdoorsy, artsy, and creative town,” Meghan said. “With the river running through the city and all of the activities that go along with that, the area is filled with art galleries and plenty of street art. Every month, we host the First Friday Art Walk, which includes art galleries and an innovative group of makers creating everything from woodworking to textiles.”

From annual festivals featuring beer, music, and LGBTQ pride to an eclectic array of international cuisine and enough outdoor activities to keep any thrill-seeker engaged, Richmond, Virginia, truly is one of the best date destinations in the nation.