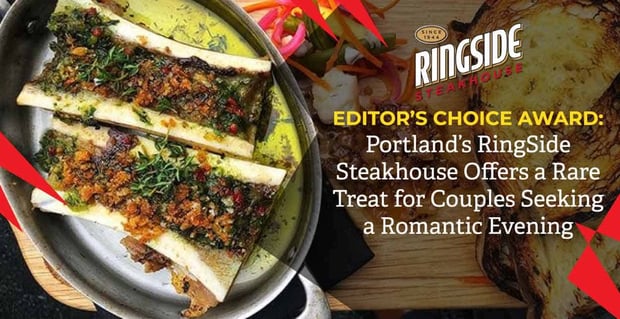 The Short Version: From its decadent menu to its impeccable service, RingSide Steakhouse is one of the most romantic restaurants in Portland, Oregon. Throughout the year, many couples have booked tables at this classy establishment to celebrate special occasions and create memories. RingSide Steakhouse began in 1944, and today the newly renovated restaurant continues to serve perfectly cooked steaks, award-winning onion rings, and other unforgettable dishes under the third generation of the same family ownership.

In October 2014, a newlywed couple visited RingSide Steakhouse for the very first time, and they were instantly impressed. The couple had asked their hotel’s staff for dinner recommendations, and three separate people told them they had to go to RingSide. It didn’t disappoint.

RingSide Steakhouse offers an upscale setting for couples and families enjoying an evening out.

They wrote a TripAdvisor review to rave about the friendly service, the beautifully retro decor, and the delicious steaks, wines, and desserts. They said their tuxedo-clad waiter was knowledgeable and helpful, and he even brought out a complimentary plate of the restaurant’s famous onion rings for the couple to try.

“We loved everything about this place, and I have told friends they must go when in Portland,” the TripAdvisor review said. “We will definitely be returning here again!”

Since opening its doors in 1944, RingSide has played host to many special and romantic nights. It’s the go-to choice for anniversaries, birthdays, and family celebrations because of its classy atmosphere, attentive service, and old-fashioned, high-quality, makes-your-mouth-water menu.

RingSide is a beloved Portland landmark, and it has won the hearts of locals and visitors alike by never settling for anything less than the best.

“There are always going to be trends in the restaurant industry, but we have never been about chasing trends,” the RingSide executive team explained. “We simply try to stay abreast of what our guests want. We strive to have the best steaks in town alongside the freshest local seafood and produce we can find.”

Freshening Up the Menu With Seasonal Favorites

RingSide Steakhouse is a familiar staple in Oregon’s dating scene, and many couples stop by when they’re in the mood for romance. Whether it’s an anniversary or just a Tuesday, the RingSide staff make sure to always welcome diners and make their meals something special.

From appetizer to dessert, RingSide’s dining experience is unforgettable. Not only does the restaurant staff go to great lengths to be courteous, efficient, and helpful, but the menu wows people with its fresh take on classic tasty dishes.

RingSide Steakhouse is a date destination with a variety of options.

RingSide has been around since the 1940s, and it has many signature dishes — most notably the onion rings — but the chefs also like to mix things up with seasonal dishes and drinks. The bar has recently added an early happy hour menu to its typical late-night happy hour (which starts at 9:30 p.m.) to encourage more casual diners to sit down and have a conversation over a few appetizers and drinks.

Couples on a first date often take advantage of the happy-hour prices as they get to know each other and set the mood for the evening. The bar’s menu offers many tasty dishes, including Crispy Spanish Octopus, Seared Albacore Tuna, and Vietnamese Steak Tartare. These shareable plates can certainly satisfy diners seeking a light meal to pair with cocktails or wine.

The in-house bartenders can always whip up something simple to suit your tastes, but you may want to check out the recently updated cocktail menu for a few more exotic and adventurous drink options such as the Thai Basil Collins, made with vodka, cucumber, lemon, thai basil, ginger, lemongrass, and soda water.

RingSide’s bar has a variety of fruity and flowery drinks, and its creative concoctions keep people coming back for more night after night.

Whether you’re sipping cocktails at the bar or cutting into a juicy steak for dinner, you can count on RingSide Steakhouse to wow your taste buds with its quality ingredients and innovative flavor combinations.

“You can always get a steak and our famous onion rings at RingSide,” the staff said. “But being in the Pacific Northwest and having close relationships with the local farmers and fishermen, things like wild-caught salmon and garden-grown tomatoes and peppers are things that shouldn’t be passed up!”

Renovations Give the 75-Year-Old Restaurant a New Look

The goal of the RingSide staff is pretty straightforward — they want guests to have the best possible dining experience. That begins when they’re welcomed by the hostess and shown to their table, and it’s something everyone on staff takes seriously.

As a RingSide manager said, “We do our best to make sure that every occasion feels special from a night on the town to a significant birthday.”

The bar is stocked with liquors and wines.

In 2019, RingSide completed renovations that have brought new life to its longstanding look.

According to the RingSide team, “Many of the changes implemented will thread through the guests’ evening, heightening it and making them more comfortable, while keeping the same signature looks and energy RingSide has been celebrated for over the last 75 years.”

One of the most important changes was to the bar. It is now more spacious and can offer faster service with two bartenders (instead of just one) on call for drink orders. The wrap-around bar now has a more distinctive and elegant appearance.

RingSide’s main dining room also received an update. Many of its booths have been rebuilt to be roomier and more comfortable. The staff wanted to give guests extra elbow room, and they’ve gotten a lot of positive feedback from long-time customers.

While RingSide may look a little different now, it’s commitment to serving guests a superb meal has not changed one iota. Diners can still expect the same high-caliber service and culinary excellence — just in a more modern-looking space.

RingSide Steakhouse has long satisfied Portland’s foodies and given couples and families an upscale place where they can dress up and celebrate life’s milestones. The restaurant has an impressive 4.7-star rating on Facebook and 4.5 stars on TripAdvisor, and many patrons have left glowing reviews saying they’ve been coming here for years or even generations.

RingSide has hosted many special events, including wedding receptions and anniversary dinners.

A local woman named Lee Ann first visited RingSide in 1960 when she was 5. She said it still has the best steaks and onion rings in town. “My parents were close friends with Wes and Bev Peterson, the original owners,” Lee Ann said. “Such good food and wonderful memories.”

Kris S. said she and her family have been dining at RingSide Steakhouse for nearly 70 years. Her parents introduced her to the restaurant as a child, and it soon became her favorite. “The RingSide always makes you feel special. The food is superb,” she said. “When I married in 1969, I took my husband and have been enjoying The RingSide ever since.”

“I can say with confidence that this was one of the best and most romantic dinners I’ve ever had,” said a woman celebrating her 30th birthday at RingSide.

“Great service, amazing food, and a clean and comfortable atmosphere,” said Phil P. in a review. “We’ve been there several times, with each visit more wonderful than the last. Our favorite!”

“We hope to remain a place for all kinds of celebrations and special occasions,” the RingSide team said. “We continue to be enthralled by the people who have celebrated their anniversary or birthday with us for decades.”

RingSide Steakhouse Sets the Table for a Lovely Date

Since 1944, RingSide Steakhouse has been there for couples from the first date to the honeymoon to the 40th wedding anniversary. This restaurant can elevate any romantic evening and give diners something they can savor together.

RingSide’s atmosphere and foods can tempt people to slow down and appreciate the finer things in life. The staff invite them to relax and enjoy a five-star culinary experience. From the bar menu’s affordable bites to the dinner menu’s high-end fare, RingSide has something for everyone, and it continually charms its way into people’s hearts.

“After 75 years, we are still going strong and still continue to be surprised and intrigued by the business,” the RingSide executive team told us. “It’s been wonderful to hear our long-time guests’ excited reactions to our recent changes and see a lot of new faces in the restaurant as well.”