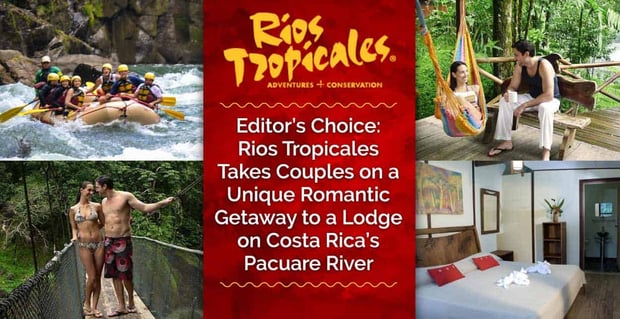 The Short Version: In 1985, Rafael Gallo and his friends set out to create an eco-friendly travel company in Costa Rica. Today, that company, Rios Tropicales, leads expeditions to both coasts and through the country’s mountains and rainforest. It has also built an ecolodge that’s run entirely by hydroelectric power produced by the Pacuare River. Many couples enjoy Rios Tropicales rafting trips that take them down the river to parts of the country they can’t see on other tours.

When couples decide to take a trip to Costa Rica, they often have an adventure in mind. Since 1985, Rios Tropicales, one of Costa Rica’s oldest guide operations, has an itinerary that’s perfect for thrill-seeking partners: a rafting trip down the Pacuare River.

On the first day of the trip, couples raft through Costa Rica’s rainforests, which are lush with greenery and filled with waterfalls. They spend that night at the Rios Tropicales Lodge, a remote ecolodge on the Pacuare Gorge that’s only accessible by boat. There, they can enjoy a deluxe room that features all the amenities of an upscale hotel in the middle of the jungle.

Rios Tropicales takes couples on romantic journeys into the heart of the Costa Rican jungle.

“Our lodge has been recognized as one of the top whitewater lodges in the world. It’s a unique place, with plenty of history and features. And it has good karma,” said Rafael Gallo, Rios Tropicales President and Co-Founder.

The next morning, couples can treat themselves to a breakfast of mango, banana pancakes, bacon, and pastries. Afterward, they may explore the lodge’s 2,470-acre property or take a self-guided hike to a waterfall and then zipline through the lush forest. At night, after a serving of the lodge’s signature Jungle Chicken, they can relax in a hammock overlooking the jungle.

“The food is great, and the guides do all the cooking. It’s like a camping trip, but at a wonderful lodge. It’s informal and yet very comfortable,” Rafael told us.

On the third day, couples take a heart-racing trip away from the lodge on a section of the Pacuare River that includes Class III and Class IV whitewater rapids. In the end, they have a relaxing, calming, and beautiful experience with Rios Tropicales.

For providing adventurous couples with serene experiences in the jungle of Costa Rica, Rios Tropicales has earned our Editor’s Choice Award™.

The Ecolodge Offers an Upscale Version of Camping

Guests often appreciate the Rio Tropicales Lodge because it removes them from what they experience in their daily lives. Not only can they take a break from digital devices, but also from the rest of the world. That means no light pollution, no traffic, and no urban expectations.

One of the ecolodge’s key missions is to help guests focus on unwinding. The Rio Tropicales Lodge offers what it calls “old world” activities — including board games, birdwatching, soaking in natural pools, or getting a hydro-massage from a waterfall.

“Most people stay two nights, but some people stay even longer because they enjoy being in a secluded, remote jungle,” Rafael said.

He said that the ecolodge is an upscale version of camping for many, and couples can choose to stay with others and share bunk beds and bathrooms to make the trip more affordable.

The Rios Tropicales Lodge is located in a remote area of the jungle, but has plenty of modern amenities.

Other couples choose to rent deluxe rooms that have private bathrooms and views of the river. These rooms come with either a single king bed, two queen beds, or three single beds.

The meals are much more delicious than something made on a camp stove. The ecolodge serves many meals made with local or notable ingredients from the region, including Costa Rican coffee and fresh tropical fruits. At 5 p.m. each night, the lodge even celebrates its own version of happy hour with refreshing cocktails, beer, or juice just before dinner.

Dinner is another one of the highlights of a stay at Rios Tropicales Lodge. One crowd favorite is the Jungle Chicken, served with rice, chicken, and vegetables. Other options include salad, bread, local meat, fish, and vegetarian dinner entrees.

Another reason Rios Tropicales has been so successful over its 35 years in business is its team of committed guides. Back in the late 1990s, Rafael and his partners bought the ecolodge from a family that owned it. The sons in the family had all grown up around the Pacuare River and knew it well. So, it was a natural fit when they became Rios Tropicales guides.

“They started working for us when they were 17 or 18 in the late 1990s, and they still work for us now. They have a lot of pride in the river,” Rafael said.

Other guides are encouraged to bring their own passions and knowledge to the job, too.

“A lot of the guides are naturalists who like birding, trees, or reptiles. They’re very good at natural interpretation. They’re also willing to learn on their own, which makes them better guides,” Rafael said.

The company has also expanded to include many activities in addition to whitewater rafting. Couples can choose to go sea kayaking or snorkeling in Manuel Antonio National Park. Others can take a guided mountain biking excursion to Caribe Mountain.

Guests can also take horseback rides or a zipline through the jungle.

Rafael said the guided excursions are the best way to travel with a partner, and couples can push each other to try activities they may have otherwise been too scared to attempt.

At the same time, he recognizes that the guides can take some of the pressure off exploring a new place.

“When the guide knows what to do, it’s more relaxing. If the guide brings you somewhere, you know it’s somewhere worth seeing,” Rafael said.

Rafael co-founded Rios Tropicales in 1985 as a sustainability-focused travel business. From the start, the team aimed to “create and maintain conditions under which humans (that’s us) and nature (everything we love about Costa Rica) can exist in productive harmony,” according to its website.

Rafael Gallo, Rios Tropicales President and Co-Founder, spoke with us about how the company helps couples enjoy adventures.

Thirty-five years ago, eco-friendliness wasn’t as trendy as it is today. Yet, that focus was nevertheless one of the company’s foundational pillars.

“We protect about 1,000 hectares of rainforest. The company itself is high in environmental responsibility, and we care about our sustainability practices,” Rafael said.

The ecolodge is a shining example of that sustainability focus as it is powered entirely by hydroelectric power. Rios Tropicales hired members of the local indigenous tribe, the Cabecars, to build a dam using reclaimed lumber.

Every expedition follows the “Leave No Trace” principle, meaning that guides and guests don’t leave anything behind.
“A lot of people are more conscious about where they spend their money. They want to do something good for the world,” said Rafael.

According to Rafael, that combination of knowledgeable guides, once-in-a-lifetime experiences, and a green focus has kept Rios Tropicales popular for more than three decades.

“Being in business for 35 years speaks for itself,” he said.