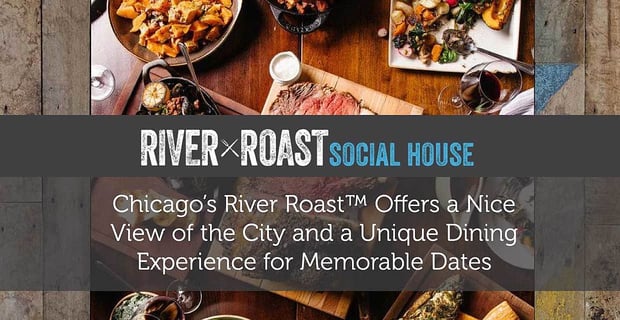 The Short Version: River Roast Social House gives couples in Chicago a one-of-a-kind date night option. The restaurant takes its inspiration from European roast houses and offers gourmet dishes that include chicken, pork, and duck. River Roast invites diners to focus on tasty food, one another, and the city — with stunning views of the Chicago River. The restaurant’s passion for the basics is why it has become a dining destination for both locals and tourists.

Legendary Chicago Chef Tony Mantuano opened one of the city’s most unique restaurants, River Roast Social House, in 2014. The restaurant is inspired by his travels in Europe and a visit to a roast house in London where he realized there was an untapped market for a roast house in the United States.

Roast houses are establishments where well-chosen cuts of meat — and in River Roast’s case, vegetables, too — are the center of attention. The restaurant’s dinner menu, for example, offers a 64-ounce, slow-cooked roast beef and a cider-brined, applewood-smoked rack of pork.

Part of the restaurant’s appeal is that it serves simple food in a city with a culinary scene full of delicacies and artfully decorated plates. While the culinary team appreciates that kind of food, that’s not what they set out to serve at River Roast.

“In an Instagram-obsessed world, River Roast is the place where you can put down your phone and focus on your table,” said Cedric Harden, Executive Chef.

That focus on the food — and company — is why River Roast is such a comfortable place to bring a date. Whether you’re meeting someone new or want to try a new restaurant with a long-term special someone, the atmosphere at River Roast is warm and inviting. Instead of learning about fancy food or dressing to impress, River Roast encourages diners to relax and get back to basics.

Cedric describes the River Roast philosophy on the restaurant’s dinner menu: “We’re not reinventing the wheel. We’re just polishing it up and making the ingredients sing.”

Bringing the European Roast House to the Windy City

The British tradition of the Sunday roast — when family and friends gather over a well-cooked piece of meat — dates back to the 15th century. It’s the biggest, most delicious meal of the week, and is typically served immediately after church. English roasts have three main components: meat, sides that include roasted vegetables, and a sauce such as a gravy. The meal is hearty and filling.

Throughout the subsequent centuries, these meals spread to restaurants and public houses. Though the United States has a similar tradition of Sunday suppers, the roast house tradition didn’t make its way to dining establishments in the U.S. That’s why enterprising Tony decided the time was right.

The restaurant’s offerings mimic the hearty Sunday supper, but Cedric says the River Roast crew is most proud of its roasted chicken dinner.

Tony Mantuano started with a recipe for roast chicken and built River Roast around it.

“We designed the recipe for the chicken and built the restaurant around it,” said Tony Mantuano. “It arrives whimsically posed vertically, legs up on a serving platter with a built-in skewer holding it in place. A server carves it tableside, and it is served with roasted potatoes that develop a thick, dark crust in the deep fryer.”

Aside from the tasty food, the tableside carving makes River Roast a memorable experience for dates. All offerings are cut up right in front of diners, adding to the ambiance of the establishment while also creating something of a show.

Along with these tried-and-true staples the restaurant also serves a long list of drinks.

“We offer inventive drinks and cold-brewed cocktails alongside a large selection of local and Midwestern beers, craft cocktails, and wine,” Cedric said.

Four-Star Chefs Make the Restaurant Stand Out for Quality

While River Roast may have a traditional staple — the Sunday roast — as its main dish, the meal’s accouterments and the restaurant’s atmosphere are anything but stuffy.

The restaurant’s contemporary touches come from Tony, along with the team, all of whom know how to balance classics while adding modern twists.

Mantuano and Chef Harden are joined by a team of chefs and hospitality managers including Jay Schuster and Ken Pritz.

The restaurant offers sweeping views of the Chicago River from its outside dining area.

River Roast stays on the cutting edge thanks to its team members’ backgrounds; they know how to honor tradition while focusing on innovation.

For example, with some of the city’s most well-known chefs at the helm, River Roast was one of the first businesses to be part Riverwalk, a development along the Chicago River. Cedric said many people thought the river would never be developed as a place for businesses or restaurants, but the Riverwalk has already proven itself to be a success.

“Our patio is one of the best in the city, with dramatic city and water views from every seat, inside or out,” Cedric said. “The river enhances dining experiences and encourages our guests to take it all in over a hearty meal meant for sharing.”

Couples planning a date to River Roast can always expect a memorable experience and may want to try some of the establishment’s newer offerings.

Ever focused on history, the River Roast team has zeroed in on Chicago’s past with its newest endeavor: Reid Bar. The bar is located inside River Roast and has a speakeasy vibe that honors its Chicago neighborhood’s past. It’s perfect for couples who want to have drinks before or after, dinner and diners can stop by during the day for coffee and doughnuts.

“The rustic setting honors the historic area of River North that gained notoriety as the city’s ‘Red Light District’ in the mid-1900s,” Cedric said.

Chicago’s infamous past is honored at River Roast’s Reid Bar, which has a relaxed, speakeasy vibe.

The restaurant’s brunch menu offers its trademark roasts, but also breakfast staples like steak and eggs and omelets.

In the four years since it opened, River Roast has become an archetypal restaurant in a city that has always loved hearty food and straightforward dining experiences. The restaurant creates the perfect date night, combining comforting classics with a modern edge.

“We will continue to offer the same genuine hospitality we’ve given our guests since we opened,” Cedric said. “We want our guests to experience the soul-warming dishes reminiscent of Sunday night supper — seven days a week.”