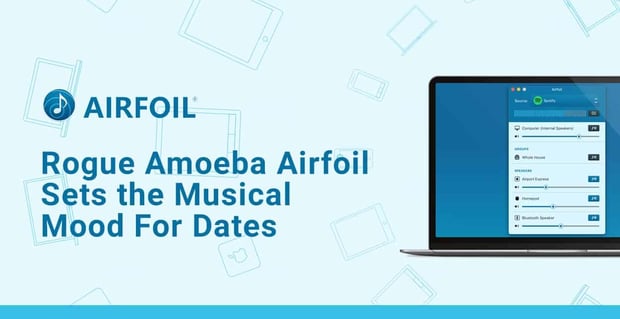 The Short Version: From smooth jazz to bossa nova, music can create a relaxing and romantic atmosphere for at-home date nights. But couples don’t want to be fumbling with phones, remotes, and speakers when they are with that special someone. Airfoil, a system by Rogue Amoeba, streamlines music curation to create the perfect sound. The system works on Mac and offers many features, including an app-based remote control that allows users to adjust the mood, no matter where they are in the house.

Music can help couples form lasting connections, and it is often a big part of their shared history. Weddings, for example, traditionally include a selection of the couple’s favorite music from throughout their relationship.

Whether it’s a first date or just the most recent special evening, music can set the mood for a memorable night. At-home dates can sometimes feel a little empty without music playing in the background. Music creates a relaxing and fun atmosphere especially when couples share a similar taste in artists or bands.

But fumbling around with a speaker system to select a specific track or fast-forwarding through songs while trying to connect can also be a frustrating experience. That’s why the Airfoil system is worth adding to any home music system.

The Airfoil system by Rogue Amoeba makes music streaming possible from a Mac computer to anywhere in a home.

The Airfoil is a wireless audio system that streams music from a Mac to multiple speakers and players throughout the home. Users can stream music from a wide variety of online platforms, including Spotify and Pandora, web-based audio systems in Safari or Chrome, or even from a personal collection on Apple Music.

“We’ve been making great audio tools for Mac users for over 19 years now, and we aim to continue doing so for many years to come,” said Paul Kafasis, Co-Founder and CEO of Rogue Amoeba.

A Company Born From a Founder’s Dream

Paul said the name of the company came to him in a dream. He shared it with Alex Lagutin and Quentin Carnicelli, and together they co-founded Rogue Amoeba in 2002. They’ve always focused on creating innovative audio tools for macOS.

Its products aim to produce the highest quality sound. They are designed with consumers, hobbyists, podcasters, and studio technicians in mind. Each product is an intuitive and powerful tool for anyone who likes to control the sound around them.

While the team has run with the name, Paul said customers shouldn’t read too much into it.

“As for what it means, each night I go to sleep hoping for another dream that contains the answer. No luck so far,” he said.

Rogue Amoeba makes all of its products available for free as downloadable trials, meaning users can check them out before deciding to buy the full version. And couples only need to purchase one license key to unlock all the sound features for date night. For example, the Airfoil license for Mac costs just $29, and it’s compatible with versions of the operating system including Monterey, Big Sur, Catalina, and Mojave.

“We want to continue to delight our existing users with useful updates and improvements, and we also want to bring in new users. It’s been working well for almost two decades now,” he said.

Airfoil allows users to play music on more than one speaker, so couples can create an ambiance for a date from the centralized location of a Mac computer. The system allows users to send any audio from the Mac to devices all around the house — including Bluetooth speakers.

That means if the date starts in the kitchen, moves to the dining room, then the patio, and then perhaps the bedroom, the music can follow the couple to keep the vibe going.

Airfoil can stream to an Apple TV, an AirPort Express, and all other AirPlay devices. It also works with Google Chromecast and other Google Cast-enabled devices. Plus, it can connect with any Bluetooth speaker or iOS device, including an iPhone, iPad, or iPod Touch, and other Macs and PCs.

Instead of streaming all audio to a single output device, Airfoil allows users to link individual applications. For example, media players — web-based Spotify or Pandora — can be played throughout the home without notification chimes interrupting the mood. Because there’s nothing worse than hearing a text message in the middle of a special moment.

Paul said the team is working on making the system even more seamless and functional for users.

“Most recently, we’ve been hard at work on supporting the newest version of macOS, macOS 12, Monterey,” he said. “Maintenance work is essential for customers to have a positive experience with our products over many years.”

Airfoil can keep the music going on date night without interruption to multiple speakers. It also works well with another Rogue Amoeba product — Airfoil Satellite, an app that turns a device into an audio receiver and remote control for Airfoil.

That allows couples to toggle between speakers or switch songs to better match their romantic moods as they move around the house during an at-home date. Airfoil Satellite is free and available on all iOS devices.

Another product, called Audio Hijack, records audio on macOS. It’s popular with podcasters who are interested in recording live feeds and musicians who want to showcase their work on YouTube Live or Twitch. The Piezo app makes it even easier to record audio on macOS. It’s a near-zero configuration product that’s affordable and simply designed.

Fisson is an editing app that’s part of the Rogue Amoeba product suite, and it helps users edit audio in minutes rather than hours without the need to re-encode audio files. Another app, SoundSource, allows audiophiles to improve the quality of audio with special effects. And Paul said the team is always working on creating new products and improving the ones they already have.

“We have some major updates coming to multiple products,” he said. “If users are into audio on their Macs, we have a full lineup of audio tools. Perhaps most popular with Airfoil users is SoundSource, which provides tremendous control over audio playback on the Mac itself versus Airfoil’s remote streaming.”