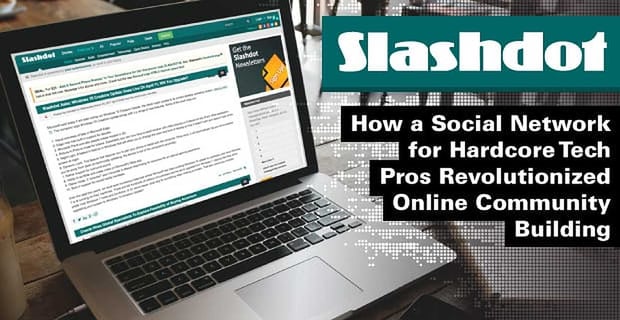 The Short Version: Slashdot hosts a community of knowledgeable tech professionals coming together to discuss and debate the latest tech news. The website’s motto is, “News for nerds. Stuff that matters,” and that’s exactly what the newsfeed delivers. What began as an undergrad’s tongue-in-cheek project in 1997 soon became a worldwide sensation in the tech world. Slashdot has grown exponentially over the past 20 years and now supports a loyal network of tech pros submitting thousands of stories and comments each day. All posts are carefully selected to interest a niche user base of highly technical, critical, and analytical people. The user-generated content and comment voting system make the forum a unique space to mingle and learn. Slashdot encourages users to actively engage in a thoughtful discussion of recent innovations, controversial laws, insightful studies, and other topics shaping the future of technology.

My older brother is full of arcane technical knowledge, but he isn’t very good at explaining it to those of us without a degree in computer programming. When he met his fiancée, he was excited to find that she could keep up with his stories about building his own computer. It turned out she had the same interests and passions as he did.

“We flow in the same direction,” she translates.

For tech geeks like my big brother, it’s a relief to find someone on the same intellectual level to talk to. Sharing interests makes it that much easier to connect with someone. If you’re a hardcore tech person (or dating someone who is), you can join a professional-grade tech conversation at Slashdot.

Slashdot cultivates a niche following of tech-savvy readers who drive the content of the site. Currently, the site’s parent company, Slashdot Media, sees over 35 million monthly visits across its trusted brands. It’s built such a strong following by engaging with people in authentic and meaningful ways online.

Slashdot’s slogan — “News for nerds. Stuff that matters” — sums up what the content offers.

Logan Abbott, President of Slashdot, acknowledged the tone of the tech site can be somewhat biting as users bluntly state their opinions about various news stories. “Slashdot is known for our penchant for free speech,” Logan said. “There’s no censorship on Slashdot, so it can be a raw place. Our users are really smart but not so into niceties. It’s a cynical, geeky tech community.”

Slashdot gives thoughtful IT professionals a place to discuss, learn, and engage with one another in an online forum catered to their interests and opinions. The site’s unique user-generated content stimulates thousands of conversations about how technology impacts our lives.

A Smart Community Sticking to What’s Worked Since 1997

Slashdot was created by Rob “CmdrTaco” Malda in 1997. This snarky taco enthusiast wanted to feature news stories about technological developments, computers, space, and even politics. Basically, the site publishes stuff that matters to tech professionals by relying on user suggestions.

Rob Malda, aka “CmdrTaco,” founded Slashdot in 1997 while an undergraduate at Hope College.

From the outset, the site’s tone was tongue-in-cheek. According to the website, “‘Slashdot is an intentionally obnoxious URL. When Rob registered the domain http://slashdot.org, he wanted a URL that was confusing when read aloud.”

In its first year, the social news site was seeing more than 100,000 pageviews a day and attracted a loyal network of tech geeks. Over the years, the site evolved in ways many longtime users, some of whom had been around since 1997, didn’t appreciate.

In 2016, BizX acquired Slashdot and started taking the site back to its roots. The tech company wants to continue promoting authoritative content and facilitating substantial conversations because that’s how Slashdot became so successful in the first place.

“We brought Slashdot back to the basics of user-generated stories,” Logan explained. “The site looks very much the same as it did in the ‘90s. Our changes are mostly getting rid of the things our users didn’t like.” For example, in a poll, 97% of users voted to get rid of videos on Slashdot, so the site discontinued all video content.

“We’ve really made an effort to listen to our users more,” Logan said. “We have a strong, dedicated base, and we’re not trying to reinvent the wheel here. We want to stay true to what Slashdot is and has always been.”

Slashdot relies on the quality of its content to generate interest and stimulate conversation. “We stay away from clickbait,” Logan told us. “It’s all user-submitted content.”

Anyone can submit a story to Slashdot. Editors work remotely around the world and monitor the feed at all hours. From thousands of submissions, the editors curate the most salient, thoughtful, and compelling stories to publish on the main page. Each day, the site posts about 35 stories that highlight breaking tech news as well as the viewpoints of real readers. These editorial pieces provoke discussion among an online community of people who work in highly technical jobs.

“Our site isn’t really for tech enthusiasts,” Logan emphasized to us. “We’re a hardcore tech site for people who work in tech. It’s probably one of the most technical communities you’ll find on the internet.”

Browsers use the Firehose feature on Slashdot to sift through new and popular submissions.

On Slashdot, the main topics range from devices to YRO (your rights online). You can browse by topic to find a popular story that interests you. In the Firehose section, you’ll see an unfiltered feed of article submissions written by users and voted up or down by users. A colored icon indicates how popular the submission is — red is a hot story and blue is cold.

The online community picks apart the latest tech news with wry humor and incisive commentary. Users reference everything from environmental policy to the movie “Spaceballs” to make their points. It’s a nerdy crowd, unafraid to get into the weeds about the benefits of using open-source code while cracking jokes about the internet being a series of tubes.

This vibrant user base is supported by a handful of editors and developers working hard to find excellent conversation starters and update their readership about breaking news in the tech world. These tech experts come together on Slashdot to exchange ideas and promote thoughtful analysis on niche subject matters.

In an article about why Americans today are having less sex, hundreds of commenters were quick to suggest the rise of the internet was to blame. “Ignoring the usual ‘no one on Slashdot actually has physical relations’ jokes,’ people are just becoming emotionally detached through not enough face-to-face time, so is anyone actually surprised they are having less sex?” wrote thesupraman.

Twenty years after it was launched, Slashdot still maintains an active community of technical pros on the web. The site averages over 4,000 comments a day on its stories.

Users share their expertise on certain topics and offer in-depth analysis about the news of the day. Sometimes passionate and knowledgeable users will post comments that run over 1,000 words long. “Some comments could stand alone as articles themselves,” said Logan.

Naturally, the more controversial topics get more comments as people linger over discussions about rights to privacy online or political developments affecting the tech industry. The forum is open to people of all opinions, but users don’t hesitate to call each other out.

Because the forum focuses on hot-button issues, you’d think the conversation would get easily derailed or diluted by the lowest common denominator on the web, but Slashdot devised an ingenious voting system to keep the trolls from overtaking the comments section.

“What stands out about our site is our comment system,” Logan told us. “It’s unique because of the way we let users moderate each other.”

On Slashdot, users vote on comments (ranging from -1 to +5) to indicate the quality of the person’s response. The average score is prominently displayed at the top of the comment. Sick of reading inane comments? You can filter them out using the scale on the right-hand side of the page, so you only see comments with a minimum score that you set yourself.

Additionally, users can select tags like insightful, redundant, off-topic, informative, funny, and other modifiers to either praise or flag a particular comment. Active users earn mod points so they can moderate comments. They’ll be scored by users on how well they did. Slashdot’s meta-moderation system ensures users are constantly holding each other accountable while online.

“As a result, we see really well thought-out and long comments,” Logan explained. “It helps the comments and discussion flow more naturally when you have the users moderating the site and one another.”

Slashdot: Where Tech News Connects a Strong User Base

For people (like my brother) who tire of dumbing down technical jargon, Slashdot is a breath of fresh air. The tech pros on this site share a common interest in technological advancements and generate an ever-growing archive of intellectual exchanges on a wide range of topics.

Slashdot invites tech geeks to make their voices heard in a community built with them in mind. Through rigorous comment upvoting, this groundbreaking online forum offers a thoughtful discourse about tech issues of the day. Whether you’re interested in new software, interesting studies, political developments, and scientific breakthroughs, Slashdot can direct you to an engaged conversation about the latest tech-related news.

“Slashdot is a community-driven website,” Logan told us. “That’s why such a site this big can be run by a small team. Our moderation system is so fine-tuned [that] our community pretty much takes care of itself.”