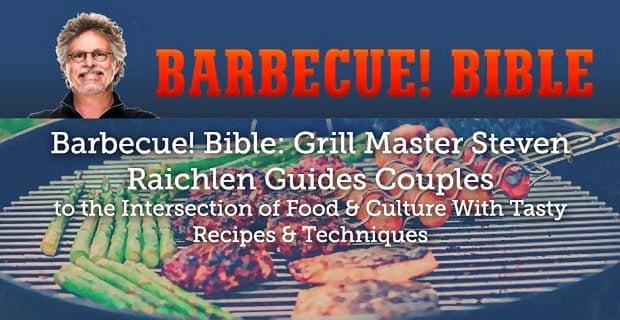 The Short Version: Couples looking to keep the passion burning in the kitchen need look no further than Steven Raichlen’s BarbecueBible.com. The award-winning grill aficionado teaches people international grilling techniques and provides inventive recipes through his website and popular cookbook series, including his latest volume, “Project Fire.” With thoughtful articles, videos, step-by-step instructions, and a catalog of recipes from his award-winning books, Steven turns grilling from an occasional treat to an everyday skill. You can also tune in to one of Steven’s television shows to see the master at work. Learn on your own or with your partner as Steven helps you create memorable meals to enjoy together over the warmth of a fire and under a sky full of stars.

Both men and women cook for their dates in an attempt to make a good impression. In fact, it’s so common that we often see the scenario play out in pop culture through books, movies, and television shows.

My favorite movie cooking scene is from “Bridget Jones’ Diary.” Watching Colin Firth come to Renee Zellweger’s aid in the kitchen after her birthday dinner goes awry showed me what a real-life knight in shining armor looks like. As things start to turn disastrous, he calmly takes over as she steps back, awed by his culinary prowess. They cook and joke together as the sexual tension builds.

It’s a wonderful scene — and one in which art really does imitate life.

Steven Raichlen, founder of BarbecueBible.com, knows there’s something special about cooking or, in his case, grilling that brings couples closer together.

Steven Raichlen knows how grilling a meal together can make for a romantic evening.

“My first book was ‘The Barbecue Bible,’ and I have probably heard from a dozen couples who somehow met through it,” he said.

Cooking with a date can often reveal connections and turn up the heat in a relationship. Research shows that couples who share household responsibilities, cooking included, report the highest levels of intimacy and not only have the most sex but are the happiest with their sex lives.

Preparing a meal together is an activity that helps couples test their compatibility and lets them bond over learning a new skill, and Steven wants to help his readers connect by teaching them how to make delicious meals.

Steven — a noted author, journalist, lecturer, TV host, and student of the world — reinvented modern barbecue. He knows how a grill can bring people together and has highlighted that in many of his projects — which include 31 books, six international television shows, and countless articles and awards. His attitude toward grilling combines an appreciation of its history and a fresh spin on what is grill-worthy. Spoiler Alert: everything is.

“What fascinates me about barbecuing and grilling is the intersection of food, history, and culture. My work with grilling and barbecue is always a window into the culture because, if you think about it, it is the world’s oldest cooking method,” he said. “It is also the world’s most universal cooking method, but it’s done differently everywhere.”

What separates Steven from other grill masters is that flavor drives his cooking style and he is deeply inspired by his travels. Most of all, he likes to surprise and delight his fans with new tastes. For instance, in his latest book, “Project Fire,” he features a technique called “Caveman Grilling” in which he cooks a steak on the embers of a fire. It results in a crusty, smoky outside with an explosion of flavor on the inside. It is a perfect example of how he is always trying to enhance flavors, or, in his words, “bring high drama to cooking on the grill.”

The Caveman Grilling method includes cooking a piece of meat directly on embers.

Steven believes people buy his cookbooks and watch his television shows because they want to learn and expand their repertoires. He points out that grilling has come a long way since he started. “Now we grill vegetables, we grill seafood, we grill desserts, and we grill appetizers. When I started, we grilled steak,” he said.

And he has often brought people together through his work. “A few years ago, a young couple took their vows from ‘The Barbecue Bible.’ It was really cute,” he said.

Steven understands the inherent appeal of grilling and shows couples how to create an entire romantic date night meal. He advises that you start with the main dish and then build the meal out.

In addition to featuring the Caveman Porterhouse described earlier as a main, Steven has a recommendation that is just as savory.

“A meal perfect for two is a rack of lamb — it’s festive, ceremonial, and celebratory. In Project Fire, I have a recipe called Finger Burner Lamb Chops. You eat them hot off the grill because it’s always fun to eat food with your fingers,” he said. The centerpiece is a rack of lamb cut into chops, covered in Italian seasonings, and grilled over a fire.

Steven recommends the Finger Burner Lamb Chops as part of a perfect dinner for two.

Building the menu out from there, Steven recommends a grilled artichoke as a starter because it’s great for sharing. From there, move on to a grilled watermelon salad, which can be an unexpected treat because it’s a hot, cold, and smoky salad. Then he recommends adding coconut grilled corn as a side with your lamb. Finally, it’s time for dessert. Steven surprises again with a decadent dessert quesadilla.

“Fill it with banana and dulce de leche for some sweetness,” he said. “I sprinkle just a little cheese in it to give a little bit of a salty flavor.” The entire meal is a new experience for your palate, and it’s all made on the grill.

You can even add a robust bottle of wine or a tub of iced craft beer to complete your romantic dinner under the stars. And you can work together to make it all.

“Project Fire” & 30 Other Books That’ll Get You Cooking

Steven’s new television show “Project Fire” is a companion series to his new cookbook of the same name. The book features a rundown of all the new grills and tools for a discerning grill master.

He also introduces his audience to new grilling techniques — like ember-roasting or using a fire-heated iron. And, of course, there are new recipes.

For those new to grilling, “Project Fire” has a unique primer course. “In ‘Project Fire,’ I start with the ‘Seven Steps to Grilling Nirvana.’ It’s everything a couple starting out would need to know about grilling,” Steven said. “It covers topics such as buying the perfect grill and which kind of grill a couple needs.”

It’s a nice set of basics to help couples become confident in their grilling skills. The book also features a fun chapter on grilled breakfasts that grilling enthusiasts will be excited to try.

Steven also has penned books on topics across the grilling and barbecue spectrum — from “Project Smoke”, which covers smoking techniques, to “Indoor Grilling” and everything in between.

Steven provides tips, recipes, and videos on his website to help people embrace their inner grill master. He mainly wants to take all of the mystery and intimidation out of it. “It’s not as challenging as people think, but people do get intimidated by grilling,” he said.

For example, Steven’s BBQ Basics: Techniques You Need to Know section covers questions that novice grillers may have — from crash courses on grills to specific foods.

If you aren’t ready to prepare a four-course meal for your date, Steven has an easy, impressive dessert that would make a dreamy end to your next outing.

“Chocolate is often associated with love and romance. There’s a recipe called Salt Slab Grilled Chocolate Brownie S’mores. Instead of using graham crackers, you use chocolate brownies, and you top them with slivered mint, Grand Marnier, and super premium chocolate,” he said. “Finally, they get topped with square artisanal marshmallows.”

Steven has another cookbook coming out that is sure to delight couples who love a taste of Italy.

“I have a TV show on Italian television called ‘Steven Raichlen Grills Italy,’ and it’s both in English and Italian,” he said. “The companion book to that show will be coming out this summer.”