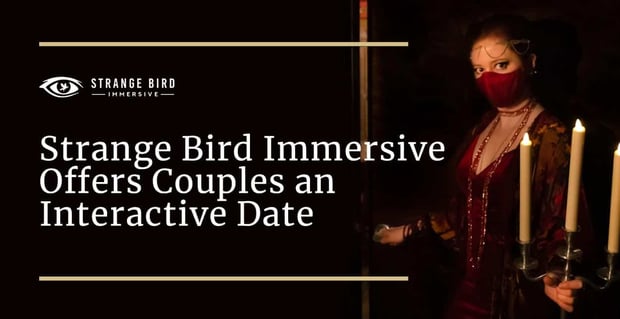 Imagine that you’ve signed up to join a séance for Harry Houdini, the famous magician. A woman named Madame Daphne greets you at the door and announces that she’ll be the host for the evening. You may look sideways at your date and wonder what you’ve gotten yourself into when you agreed to attend a performance at Strange Bird Immersive.

This award-winning escape room is famous throughout Houston for throwing people off balance with its mysterious characters and fun plot twists. Every visit makes for an intriguing evening.

Strange Bird Immersive bills itself as the next generation of escape rooms.

Madame Daphne brings guests into the séance room where she offers tarot card readings to start things off. What a unique way to get to know your date!

If you look around, you’ll notice the séance room is filled with items similar to those that Houdini actually owned. There’s a magic trunk, a cabinet of mysteries, and a pair of his handcuffs resting among other eyebrow-raising curiosities. Surprises are everywhere.

“The séance begins — and then something unexpected happens,” said Haley E. R. Cooper, the co-artistic director. “Things make a dramatic turn, and that’s when the audience can step up to save our characters.”

Strange Bird Immersive has gotten a lot of gasps and laughs with its “The Man From Beyond” escape room performance. This unique theater experience is designed to engage participants with puzzles, mysteries, and stories inspired by the world of magicians and fortune tellers.

Recently, Strange Bird Immersive was named one of the top escape rooms in the world and the best in the U.S. by the Top Escape Rooms Project.

The idea for the immersive theater experience was born from a husband-wife team. Haley and J. Cameron Cooper share a passion for the theater. They met as actors and even got engaged after a dress rehearsal of a Shakespeare play. The couple has studied the history of theatrical performances and opened Strange Bird Immersive to add their own unique flair to Houston’s performing arts.

“We saw how much fun it was. It was close to theater, with set design, lighting, and sound. There are props and a storyline,” Haley said. “There’s some crisis that happened that calls the players into action. And you win or lose. It’s like a climax and a conclusion. When we saw that, we thought, ‘How can we be a part of that?’”

The couple married escape rooms with theatrical performances when they opened Strange Bird Immersive. The result has captured the imagination of people from all walks of life. You can book a spot in the game online and prepare yourself for a fun night like no other.

Since its opening, people have responded positively to Strange Bird Immersive performances. Troy Armstrong, a participant from Kansas, called it remarkable.

“An absolutely transcendent, magical, thrilling, captivating, and (most importantly) human experience,” he wrote. “From the set design to the puzzle integration down to the historically researched details of every element of the production, this was a truly revolutionary experience.”

Strange Bird Immersive is an interactive spot for a date night or a fun outing with friends or family members. It’s a chance for people to show their creativity and lose themselves in the heart-pounding mystery of it all. The audience isn’t sitting back and watching the show — they are active participants who play important roles in the storyline.

The event typically takes between 75 to 100 minutes from spooky séance to mystery solved.

In 2020, Strange Bird Immersive had to change the way it entertained audiences to work within COVID-19 health guidelines. The creators of “The Man From Beyond” made changes to keep this unique experience alive during the pandemic.

“The Strange Secret of Mr. Adrian Rook” is an immersive theater experience that streams online via Zoom. The show has been running since August 2020 and has proven popular outside the Houston area. Some participants have even logged in from The Netherlands and Japan.

“That experience is open to anyone in the entire world,” Haley said. “You don’t have to be in Houston. It’s been really fun to do that to reach other crowds.”

As of 2020, the theater has opened virtual performances for small groups on Zoom.

Strange Bird Immersive has tentatively opened its in-person experience for small, private groups. “The Man From Beyond” show caps its audience at eight people at a time. The limited capacity can make the date experience even more intimate and engaging.

In addition to hosting private groups, the theater’s team has worked behind the scenes to make sure it is compliant with health regulations. For example, one clue involved a participant looking through an eyeglass, but now the experience has minimized the props that participants need to touch.

Strange Bird Immersive requires all characters and participants wear masks throughout their experience. The entire inside is sanitized between performances with HEPA filters running continuously, and the cast is fully vaccinated.

Haley said that most of the people who participate in their immersive theater performance are between the ages of 20 and 40. The people who want to join Strange Bird Immersive aren’t the type who are happy sitting around watching Netflix, she said.

“They want to play something, maybe from a video game background, but not people from nerdy puzzling backgrounds,” she said. “We’re catering to people who want an immersive adventure, to participate in something like a movie.”

Strange Bird Immersive: An Exhilarating Way to Bond on a Date

Strange Bird Immersive can be a nice team-building or family-bonding activity, but it’s most often used as a romantic and eerie backdrop for a date.

“It’s such a blast. You come out seeing the world differently and the person you shared it with differently,” Haley said. “You learn new things when you’re working together. It can also bring you closer together because you end up doing different things than you normally do.”

Haley said the escape room theater has even been the setting for a marriage proposal. The team created a special puzzle that ended when the woman found a ring. This romantic moment brought a tear to everyone’s eye, and the actors and participants shared a celebratory cake in the lobby afterward.

As 2021 ramps up, Haley said Strange Bird Immersive has a new escape room in the works. “Lucidity” will take the audience into a person’s lucid dream where they’ll find that not everything is what it seems. This show will open some time later this year.

“We all feel that it’s our calling,” Haley said. “It’s something to be deeply proud of and to honor. Seeing people light up, you can get addicted to that really quickly. We see ourselves as artists, ultimately.”