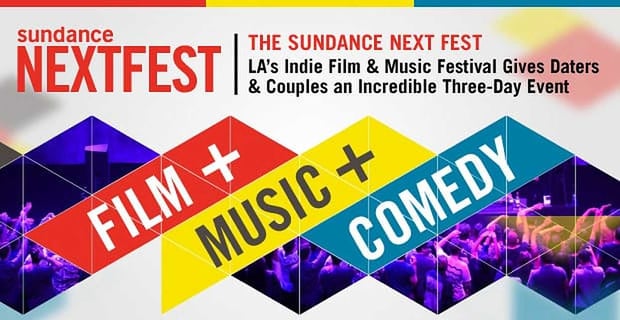 The Short Version: Already well-known for its popular Park City, Utah-based film festival each January, Sundance hosts another event in Los Angeles that’s been a big draw for Southern California indie film junkies. Sundance’s annual NEXT FEST officially kicked off in 2014 with its inaugural event taking place in The Theatre at Ace Hotel in downtown Los Angeles. The event is quickly gaining in popularity and continues to grow, adding fresh new musical acts and groundbreaking films each year. NEXT FEST combines indie film and live music, providing an ideal excuse for daters, couples, friends, and strangers to all come together for a memorable event.

Just about every long-term Los Angeles resident, and anyone who’s had any involvement with or appreciation for film, has certainly heard of the famed annual Sundance Film Festival in Park City, Utah.

The Robert Redford-chaired event began in 1978 and has since become the largest independent film festival in the United States. The Sundance Film Festival takes place for one week at the beginning of each year, and it’s one of the few times that Los Angeles experiences a marked decrease in traffic resulting from the masses who routinely travel to Park City for the big event.

One emerging event that is still being discovered by film and music connoisseurs in Southern California, however, is Sundance’s NEXT FEST. Essentially, this started as a subsection of the main Sundance Film Festival (originally called NEXT WEEKEND) and is now its own separate event in Los Angeles.

NEXT FEST is a happening where music and film lovers can gather for exposure to fresh new artists and movies without braving the cold in Utah. The first Los Angeles-based NEXT WEEKEND event took place at Century 5 Cinemas in West Hollywood in 2013 and has since moved to a much larger venue, The Theatre at Ace Hotel, in downtown LA.

The Theatre at Ace Hotel in downtown Los Angeles is the site of Sundance’s NEXT FEST.

With NEXT FEST’s move downtown in 2014, it has seen numerous sold-out shows with big-name acts and film collaborators becoming involved. The festival includes indie films paired with live music, providing the ideal space for like-minded folks to come together, meet, and mingle over a shared passion.

“Think the Park City fest’s younger sibling, with a better record collection,” wrote Frank Mojica in his Noisey article “Sundance NEXT FEST is the Film and Music Anti-Festival You’ve been Dreaming Of.”

NEXT FEST gives Angelenos the opportunity to plan a memorable date or weekend out that’s centered around a celebration of independent film. The pace at the festival is a little slower and significantly sunnier than the actual Sundance Film Festival, making for a relaxed atmosphere.

NEXT FEST accomplishes something truly special by matching up indie film debuts with musical performances. When NEXT FEST moved its location to the 1,600-seat Theatre at Ace Hotel, it gave Sundance’s director of programming, Trevor Groth, the opportunity to get creative — pairing together well-matched films and concerts for unique experiences.

One of the most appealing aspects of NEXT FEST is the tickets are very reasonably priced, giving festival goers on any sized budget the opportunity to participate in a cool film festival that carries the clout of being sponsored by the Sundance Institute.

“[Robert] Redford has always loved the cross-pollination of film and music… we wanted to do something unique in pairing a music artist with a film,” Trevor told Gina Hall for a Huffington Post article.

The NEXT FEST 2014 event included an outdoor screening of “Napoleon Dynamite” for the film’s 10th anniversary. It took place at Cinespia in the Hollywood Forever Cemetery, followed by three days of music and film pairings in downtown Los Angeles.

Attendees had opportunities to catch screenings of films like the zombie comedy “Life After Beth,” which was accompanied by a show by singer-songwriter Father John Misty, and Kendrick Lamar’s 14-minute short “m.A.A.d.,” which was paired with a performance from Top Dawg Entertainment’s Tinashe, among others.

NEXT FEST’s daytime screenings are accompanied by discussion panels with directors and special guests, giving attendees the opportunity to mix education into their weekend and learn more about the films being presented. Past panels have included discussions between big-name directors like Catherine Hardwicke (“Twilight”) and John Landis (“The Blues Brothers”).

NEXT FEST also offers Short Film Master Classes for aspiring short filmmakers or for those who’ve been working in the industry for years and simply want to hear real-world stories from established writers, actors, directors, and comedians. The classes are geared toward directors, but anyone with an interest in short film is encouraged to attend.

Panel discussions and classes are a great way forNEXT FEST guests to learn more about the industry while enjoying a fun weekend of film and music. This blend of education and entertainment is sure to generate interesting conversations, giving guests, friends, and dates something to talk about both during and after the festival.

The Boys and Girls Next Door: An Outdoor Area for Drinks & Mingling

When not attending screenings, concerts, and discussion panels, NEXT FEST attendees can head over to NEXT DOOR where they can mingle, enjoy snacks and drinks, and engage in fun activities throughout the weekend. It’s a great excuse to meet other festivalgoers and enjoy a bit of time outside.

The outdoor entertainment venue gives guests an opportunity to talk about the event over refreshments while checking out product and food pop-ups from a variety of different sponsors.

From Park City Roots, NEXT FEST Has Carved Out Its Own Niche in LA

NEXT FEST is a nice hybrid of indie music and film — one that is successfully making a home for itself in Los Angeles. It’s a great way for Southern California local film and music fans to attend a festival of Sundance acclaim without having to jump on a plane to Salt Lake City.

NEXT FEST has already become a hit, and it only continues to grow — with more thought-provoking films and musical acts on the horizon as the event becomes more established. The festival takes place one long weekend every summer in downtown LA and provides an opportunity for like-minded people to come together over a shared love of film and music.

For anyone living in Los Angeles or surrounding areas with an interest in music and film, this is one event that’s not to be missed. Bring a date, grab a group of friends, or head to the event solo and indulge your senses in a rich new experience organized by the same folks who put on one of the most prestigious film festivals in the world.

Adam is an experienced editor and writer who is skilled at conducting interviews that get to the heart of a subject matter. After working in newspapers for more than a decade, Adam switched to the exciting world of online content to expand his reach. He now works closely with dating experts and industry leaders to ensure readers are always in the know.