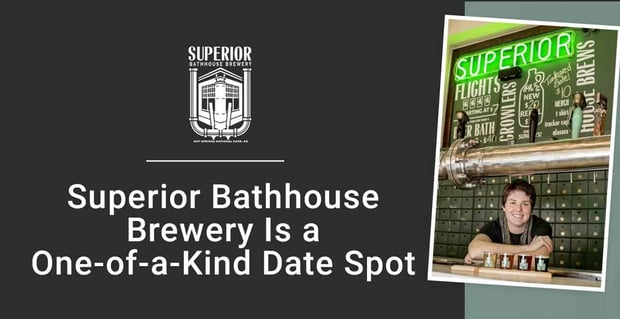 The Short Version: Superior Bathhouse isn’t actually a bathhouse — at least not anymore. The former spa, built in 1916, is now a brewery, taproom, and event space perfect for a unique date. Couples visiting Hot Springs National Park can eat lunch or dinner at Superior Bathhouse Brewery and enjoy 18 beers on tap and classic pub food. What’s even more unique is that Superior Bathhouse uses water from the national park’s thermal pools to craft its delicious beers.

Rain that fell over 4,000 years ago makes up most of the water at Hot Springs National Park in Arkansas. Over time, the water heated to 143 degrees. In 1916, a group of intrepid individuals turned those thermal pools into Superior Bathhouse.

Today, Superior Bathhouse Brewery in Hot Springs National Park serves beer and pub food for couples on dates, but it continues to celebrate its unique and fascinating history.

“The style of construction was markedly different from that of the Victorian bathhouses that were its contemporaries. Its name was said to derive from offering superior service, but it may also have been meant to appeal to the many health seekers arriving from the upper Midwest,” said Jami Smith, Brand Manager of Superior Bathhouse Brewery.

The original building, described as being an “eclectic commercial style of classical revival origin,” was 11,000 square feet and cost $68,000 to build, according to the website.

“Brick pilasters lend architectural interest to both the forward projecting sun porch and to the second story portion of the main building. The vaguely Doric pilaster capitals are inset with a center medallion of green tile, as are the paterae over the pilasters. Both the sun porch and the second story portion of this bathhouse are topped with brick parapets,” according to the Superior Bathhouse Brewery website.

The beautiful building was a hotspot for families and tourists seeking wellness in these thermal pools until it shut down in 1983. Then, in 2013, Rose Schweikhart, the owner of Superior Bathhouse Brewery, and her team had the idea to convert the bathhouse into a brewery, restaurant, and event space ideal for dates.

“Water from 47 springs is centralized and tested for safety prior to distribution to bathhouses, jug fountains, and our brewery for your personal drinking enjoyment,” according to the brewery.

Crafting Beers for Every Taste

Each capped thermal spring pumps into a collection tank before it is distributed to all of the establishments on Bathhouse Row. The brewery can brew up to 10 barrels — each holding 31 gallons of beer — at a time.

The establishment brews between 200 and 1,200 gallons of beer per week in its steam-fired brewhouse. Beers take between two weeks and six months to finish depending on the style.

The most popular beers on tap are Madden’s No.1, a light blonde ale similar to most light domestic beers, the Space Force, “a medium-bodied, hazy velvet texture with hints of blood orange and tropical fruits,” and the Beez Kneez, a blonde ale with sweet honey and a touch of basil.

Many couples on dates choose to sample four of the 18 beers on tap in its 4-ounce flights. Intrepid beer drinkers can also try all 18 options in the signature Beer Bath taster.

Many couples on trips to Hot Springs National Park have enjoyed their experience at Superior Bathhouse Brewery, which is reflected in many of the establishment’s online reviews.

“We were really interested in sampling their beers, but also had a few appetizers. Everything we had was great, including the service we received from our waiter, Penny. He was personable, and had a great attitude. He was patient with his customers, and it appears that he loves his job! So glad we made this a stop on our trip!” said one diner.

Hosting a Variety of Romantic Events

Couples who appreciate Superior Bathhouse Brewery’s classic ambiance and unusual beers can even make the brewery a part of their wedding. And the Tap Hall ensures couples enjoy their events rather than worry about them.

While the bathhouse doesn’t have the space for wedding ceremonies, it has hosted many wedding receptions and rehearsal dinners. Couples planning events with 75 people or fewer should consider the Tap Hall space.

“Our event coordinator normally discusses the beer or liquor aspect with the guests to predetermine a tab that is included with the event price,” Jami said.

Couples can book the event hall on the second floor above the brewery. Originally the dressing room for the bathhouse, the space has been renovated in seafoam green and red brick walls.

The Tap Hall provides tables, chairs, silverware, and servers for events and is ADA-accessible with a private elevator and bathrooms for guests. The catering team also offers an in-house menu featuring many locally grown products.

After couples inquire about an event, the coordinator works with them to choose food and beers. Couples can also add other spirits for their event, including liquor and wine.

VacationIdea lists Superior Bathhouse Brewery as one of its top 20 wedding venues in Hot Springs, Arkansas.

“Their products use the natural thermal water of the hot springs as an ingredient in the beer, and weddings who book at Superior Bathhouse Brewery can get as much a taste of that beer as they want when they celebrate their nuptials there,” the publication wrote.

A Rare Brewery in a National Park

Hot Springs National Park is also worth a visit. The park combines nature and history in a single location, and it celebrated its 100th anniversary in 2021. It is also the smallest park in the National Park System at 5,500 acres.

When couples travel to the park, they can take in the “American Spa” history by visiting Superior Bathhouse Brewery along with the eight other bathhouses along the row.

“Starting in the 19th century, several spas that offered baths pumped in spring water opened in the region. Many visitors with ailments such as arthritis flocked to these relaxation stations, believing that the mineral-rich waters could help heal them,” according to National Geographic.

Visitors can also explore the 47 thermal pools. One bathhouse is still in operation, though visitors can’t take a dip in the pools. They can also drink the water in fountains throughout the park.

After exploring the pools, couples can also take forested hikes, drive through mountain vistas, and learn about the region’s geology of the region.

Gluten-free patrons can even opt for one of Superior Bathhouse Brewery’s cider options instead. Plus, couples can take home brews in 32- or 64-ounce beer containers if they come in on Sundays.

And Rose still views brewing beer as an art form.

“Rose and the Superior Bathhouse brewing team crank out a constant stream of new beer from the original to the outlandish,” the team said.