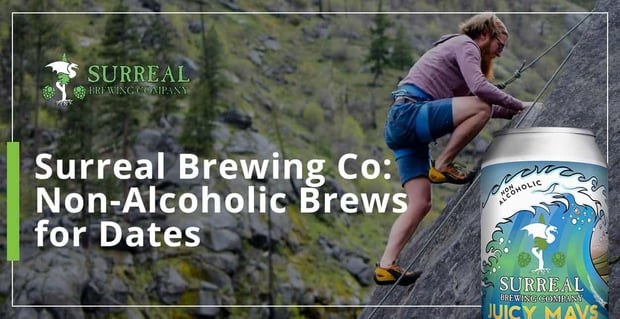 The Short Version: When couples try to cut down on alcohol, they often have to settle for sugary sodas and mocktails — or plain water. That inspired one couple to start Surreal Brewing Company to produce complex, bold, and unique non-alcoholic craft beers. Surreal Brewing Company doesn’t add sugars to its products, and its brews have won more international beer awards than any other non-alcoholic brewery in the United States. That’s why its beverages make a refreshing addition to any at-home date.

In the U.S., it is quite normal for adults to celebrate everything from milestones to the end of another workweek by drinking alcohol. Friends often bring a six-pack of craft beer to get-togethers, and many date nights include sharing a drink or two and a good conversation.

But not everyone feels comfortable with alcohol — for a wide variety of reasons. Some may feel they drink excessively, and it causes friction within their relationships. Others don’t like the impact on their health or the excess calories.

Even with good reasons, showing up to a party or trying to create a special date night at home with soda, water, or mocktails doesn’t cut it sometimes, and many non-alcoholic beers are filled with so much sugar that they lack the complex tastes of craft brews. It’s a dilemma that the founders of Surreal Brewing Company know well.

The husband-and-wife team behind the business doesn’t drink alcohol, but they always missed sharing the bold and delicious taste of craft beer varieties. So they created a line of beverages that provide those unique, refreshing tastes — without the alcohol.

“As NA drinkers, we had accepted that we wouldn’t be enjoying the mosaic of craft beer styles on the market,” said Surreal Brewing Company Founders Donna Hockey and Tammer Zein-El-Abedein. “However, after a major life change — a diagnosis, and successful treatment for breast cancer — we wanted to celebrate a new chapter in our lives with a non-alcoholic beer.”

The couple said they were wildly disappointed with the options they found. So they started Surreal Brewing Company to develop their own and share them with others who enjoy the taste without the health or behavioral impacts.

A Variety of Flavors for Every Palate

Donna and Tammer started by brewing their own non-alcoholic craft beers at home. It took some time to experiment and learn what separated the bland beers from the ones people raved about.

“Knowing there were others who felt excluded from the diverse craft beer scene as well, we started home-brewing a recipe for a non-alcoholic craft beer,” Donna and Tammer said. “It had to be something we would be proud to celebrate with. It had to be bold, complex, and worthy of sharing with friends. It had to be different.”

Of course, the non-alcoholic segment of the beer market had practically been stagnant for decades. Beer without alcohol was almost a joke to some people. And budding entrepreneurs recognized that non-alcoholic drinks had to be so impressive that people could feel empowered by their choice rather than embarrassed.

Donna and Tammer were also busy raising three children under the age of 12. They aimed to treat whoever decided to buy their beer like an extended member of their family.

After nine months of research and brewing, the couple unveiled their flagship Chandelier Red IPA in June 2018. Almost immediately, they won a gold medal in the World Beer Awards, and their product was picked up by a national retailer two months later.

“Since then, our brews have gone on to win 16 international awards, making our line the most-awarded line of NA beers in the U.S.,” Donna and Tammer said.

Low-Calorie, Low-Sugar Brews are Perfect for Couples to Share

As the company has grown, so has its team of experts. Surreal Brewing Company’s motto is “Dare to be different,” and that’s what it strives to do with every product.

“We are constantly pushing the boundaries of what can be done in the NA industry,” they said. “From the start, we made the healthiest NA craft beer and did not cut corners by adding sugar to make up the flavor profile. Our beers are purposefully brewed to be very complex and bring out the complementary hop, malt, and yeast flavors.”

Surreal Brewing Company customers are all over the age of 21, with the majority between 25 and 65. People from all walks of life are interested in trying a non-alcoholic craft beer, and about 30% of American adults don’t drink alcohol. Tammer and Donna said that even the founders of large craft breweries regularly order their brews.

They told us their beers are perfect for a date night, as well. While beer has always been a popular drink while bonding with someone, Surreal Brewing Company options allow people to stay sharp and engaged throughout the night. There are no hangovers in the morning and no regrets about what was said or happened.

“Surreal beers are relaxing as well and very healthy with anti-inflammatory properties, polyphenols, vitamins, and electrolytes to hydrate,” Donna and Tammer said. “There is something very attractive about consuming healthy, exciting beverages that will enhance the date.”

Its beers are good conversation starters, thanks in part to the interesting art on their labels. For example, couples can talk about art depicting Mavericks, the spot where surfers tackle 50-foot waves, or 17 Mile Drive, a beautiful coastal drive with ocean and twisted cypress views.

Donna and Tammer said they frequently receive feedback from customers sharing their stories about Surreal brews. Recently, they received a letter from a customer who was hospitalized with COVID-19. The letter said that when he was finally taken off oxygen, the only thing he wanted to eat or drink was their Juicy Mavs Hazy IPA.

Of course, they sent him some right away.

“Tasting our brews is how people get to know us,” Donna and Tammer said. “We love when people are trying for the first time and are blown away.”

They said a man once came up to their booth to taste all of their different brews. The man decided to buy a couple of cases as a gift for his son, lamenting that he wished he drank alcohol so he could get one, too. When he learned that the brews were actually non-alcoholic, he was elated. He ended up buying a case of each for himself to enjoy at home.

Each craft beer comes with a straightforward label, so drinkers know exactly what’s inside as far as calories, fat, carbs, and sugars. Many brands — especially non-alcoholic — won’t list sugars, but that’s a common way to add taste.

Fan love Surreal Brewing Company’s Milkshake IPA, which has natural hops to highlight the citrus, vanilla, and a hint of sweetness provided by monk fruit. It’s one of the brewery’s highest-calorie beers, at just 65 calories a serving.

It provides pairing options on its website, as well. For the Milkshake IPA, Surreal Brewing Company recommends pairing it with spicy foods, burgers, or vanilla ice cream.

“We are proud of the quality, taste, and healthiness of our beers,” Donna and Tammer said.