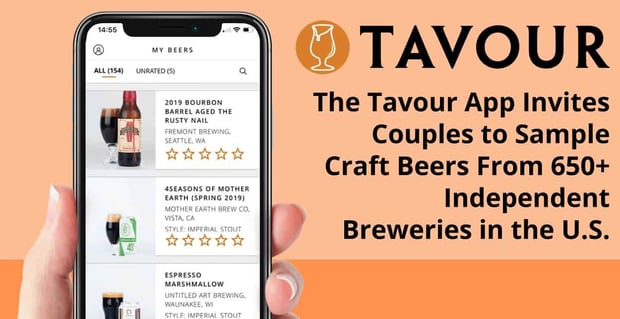 The Tavour App Invites Couples to Sample Craft Beers From 650+ Independent Breweries in the U.S.

The Short Version: The Tavour app has simplified the search for a high-quality craft beer by giving people direct access to over 650 breweries spread across 47 states. All you have to do is enroll in a subscription to get delicious top-rated beers sent to your doorstep every month, or you can handpick the beers you want most. Thanks to its innovative delivery service, Tavour can give couples the chance to share their passion for craft brews and turn their home refrigerators into a local beer destination.

Tavour is the passion project of a group of self-professed beer nerds who want to make craft local beers more accessible to everyone. The team has developed an app that connects people with some of the hottest independent breweries in the U.S. and brings delicious brews to the doorsteps of people living across the country.

The Tavour app delivers the goods and allows subscribers to customize their packages to fit their tastes and schedules.

Tavour delivers beer from independent breweries across the U.S.

Now, in most select zip codes, you can use Tavour to sample the beers of a family-run farm in New York or a boozy outpost in South Carolina. Tavour features beers created in the frozen tundras of Alaska and the dry plains of Colorado. Its flavor profiles run the gamut from mouth-puckering sours to decadent dessert beers that are literally sweet as pie.

Since its launch, Tavour has partnered with over 650 breweries in 47 states to make it possible for beer lovers to sample high-quality beers without leaving home. For a flat subscription fee, beer lovers can get anywhere from six to twelve beers delivered on a regular basis and try something new alongside friends, dates, and loved ones.

Couples can put together a prime beer list on Tavour and get a subscription to collect delicious refreshments for their at-home date nights. Tavour is free to download on Google Play and the App Store.

Megan Birch, the Marketing Manager at Tavour, said the purpose of the app is to help beer lovers explore remarkable taprooms without leaving home. Since its launch, the community-driven app has inspired many tasty adventures, social gatherings, and romantic dates with its on-demand catalog of craft beer, and it continues to grow in size and popularity every month.

“Breweries use ingredients grown by local farmers or harvested by local chocolatiers, ice creameries, and coffee roasters — just to name a few,” Megan said. “It’s this connection that can make a difference. And it’s this connection that has the power to redefine ‘local’ into a broader community of fans and breweries that believe independence is the heart of craft.”

Beer Lovers Can Upgrade Their Experience by Subscribing

In addition to its pick-and-choose shipping, Tavour recently unveiled a subscription option that brings top quality beers to more people’s doors automatically. Members can press the circle icon at the bottom of the navigation bar to see their options.

First, you choose your beer style — it ranges from “hoppy and juicy” to “light and crisp” — and then you decide how much beer you want and how often you want it. You could get six beers delivered every three months, or you could go all in and get 12 beers each month. It’s totally up to you. Don’t worry, if it’s too much or too little, you can go into your account and adjust the frequency at any time.

Delicious beer is meant to be shared, and that’s exactly what Tavour does.

The Tavour team started offering a subscription option because it realized that some members wanted to be surprised by the beers at their door. A streamlined process is more to their tastes.

“We want to give as many people as we can a chance to try incredible independent craft beer,” Megan said. “We are always listening to our members through surveys and research, and we found that a subscription model would be beneficial.”

The Tavour subscription includes forever free shipping, and it allows members to save money, time, and effort while still getting delicious beers delivered to their doors. The team can offer a diverse selection of beers, and it handpicks the top-rated ones that meet the member’s standards.

Now you can discover the creamy sweetness of a barrel-aged blueberry cheesecake stout or the surprising tang of a peanut butter banana and jelly beer. Tavour highlights remarkable beers from across the U.S., and it provides a tasty adventure for individuals and couples who love beer.

“We are a customer first company,” Megan told us. “We all support our mission to help breweries grow, and — obviously — we love craft beer.”

Reviewers Say They Can’t Get Enough

To date, Tavour has led to over 7,000 beers being tasted and shared across the country. Thousands of members say they enjoy sampling beers from different cities because it allows them to explore taste profiles from coast to coast without leaving home.

People can customize a collection of craft beer on Tavour.

Tavour introduces fresh flavors and original concoctions to people’s lives, and it’s understandably popular in the craft beer community. The app currently has a 4.7-star rating in the App Store and 4.2 stars on Google Play.

“Every beer I have had has been as good or better than the last,” said a Tavour user. “Thanks for helping a humble beer lover get access to things that would be unimaginable without you.”

“Customer service is tops. No major issues with the app,” Rema A. raved on Google Play. “I love Tavour. Cheers.”

A subscriber named Tiffany said she and her partner have used Tavour to bring added flavor to their date nights. “Our crate is always brimming with a varied and interesting selection,” Tiffany wrote in her review. “I also appreciate that Tavour has a phone number that can be reached if there are any questions, concerns, or changes.”

Tavour supports many nuanced tasting experiences that bring beer lovers together and give them something they can savor during lunch breaks, dinner dates, and cozy nights in. Whether you’re drawn to Alaskan IPAs or Wisconsin stouts, you can find lots of mouth-watering beers featured on Tavour — and have your favorites delivered directly to your door.

With its craft beer delivery service, Tavour empowers people to fill their fridge with one-of-a-kind brews sourced from some of the most popular independent brewers in the country. Now beer lovers don’t have to go out of their way to discover quirky, zesty, and indulgent brews. They can simply download the app and customize their order — or ask the Tavour team to surprise them.

If you and your partner have explored all the breweries in town, you can expand your beer horizons, get out of your dating rut, and try something new by getting a Tavour subscription. The app can give couples access to the delicious creations of more than 650 breweries, and its beer selection can bring extra flavor to date nights and parties across the nation.

“Tavour is the easiest and most intuitive way to get some of my favorite beers and for discovering new ones!” said Scott in a review. “A must-have app for those who are even casual fans of beer.”