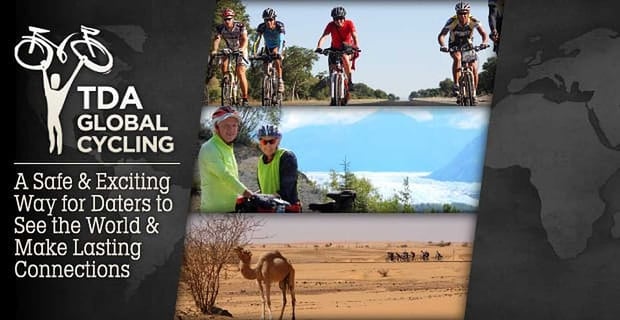 The Short Version: TDA Global Cycling invites adventurous singles and couples to hit the open road in beautiful remote destinations on six continents. Riding a bicycle through the plains in West Africa or the city streets in Istanbul gives people a unique perspective on the world. You can experience the scenery up close and personal while biking alongside friendly and seasoned travelers on your tour. TDA Global Cycling’s staff makes sure everyone stays safe and upbeat as they travel from one adventure to the next. It’s easy to bond while enjoying a once-in-a-lifetime trip biking through small villages, sampling local cuisine, and weathering the elements together with TDA Global Cycling.

Nonprofit work often requires constant fundraising to keep operations afloat. After decades working for NGOs, Henry Gold found himself bogged down by never-ending fundraising goals. Though he believed in the causes he worked for, which included providing aid and relief to African people, he told us he felt burnt out and ready for a change. “I was tired of dealing with donors and their competing interests,” he said. “I was tired of being obsessed with finding money.”

He wanted to find another way to help change the image of Africa — without having to deal with the headaches of money-grubbing practices. He landed on bicycle tours in Africa as the perfect solution. He could shine a different light on countries, like Ethiopia and Ghana, by letting the beautiful scenery and cultures speak for themselves. Plus, participants would fund themselves so it would be a cost-effective program.

He founded TDA Global Cycling in 2002 to encourage people to see the world from the seat of a bicycle. Soon, the popularity of his tours inspired him to expand beyond Africa — today, the TDA team conducts tours on six continents.

Leading groups of cyclists from around the world through busy streets or secluded trails, the tours arouse wonder, excitement, and camaraderie. If you’re looking for a way to meet outgoing and intrepid individuals, you can grab your bike and join TDA Global Cycling’s active community. It’s a wonderful way to expand your horizons and bond with like-minded travelers.

“People come out and find the challenge of their lives on our tours,” Henry said. “Plus, it’s a chance to do good by contributing to the local economy on your visit. The tours are safe, exciting, and absolutely worth doing.”

A Transformative Experience for Travelers of All Ages

TDA Global Cycling hosts about seven tours per year. The extensive, cross-country trips are broken into sections that last as little as five weeks and as long as five months. You can join the tours on your own time, though, biking with them for only 10 days or riding it out for the entire tour. The organization lets you set your own pace on your journey.

Henry emphasized the individualized nature of TDA Global Cycling’s trips. The group eats together and sleeps together, but after breakfast, everyone goes their own way to reach their appointed destination. There’s no need to stick to the beaten path if you don’t want to, and, of course, you’re free to pair up with someone special if you make a connection on the tour.

You can find the tour that’s right for you using the Tour Finder tool online. Simply click where you want to go, and you’ll see the dates of upcoming trips through the heart of South America, North America, Africa, Europe, Asia, and Australia. Many of the trips sell out, so be sure to book early to reserve your seat!

On the tours, you’ll enjoy both the freedom to wander and the structure to stay safe in case anything should happen. Experienced guides are ready to make repairs, offer medical assistance, and solve any issues that arise. Henry told us problems are few and far between on TDA Global Cycling tours.

Feeling up to embarking on an extreme experience abroad? TDA’s 7Epics challenges cyclists to cycle the world in seven long-distance tours. This intense journey encompasses over 50 countries across six continents. Over the course of many years, cyclists cross the world tours off their list one by one until all seven are completed. Combined the trips cover more than 72,000 kilometers (which is almost the equivalent of traveling around the globe — twice!) and inspire participants to explore different cultures and historic sites.

Whether traveling from Dublin to Copenhagen or up the coast of West Africa, cyclists with TDA Global Cycling discover a transformative experience seeing the sights, meeting new people, and sharing an adventure in remarkable settings worldwide.

Thousands Join the Tours to Expand Their Horizons & Meet People

When you travel with TDA Global Cycling, you’ll meet many passionate people in your travels. Friendships form quickly and sometimes lead to romances between people who live halfway around the world from one another. Henry said the trips have a magical way of bringing people together despite differences in background, nationality, and age.

Along the way, you can form friendships as you sample the cuisine, explore the terrain, and enjoy the unique experience of traveling abroad by bike. “It’s amazing how many people have paired up,” Henry told us. “We’ve had over a dozen marriages and even more relationships between people from all parts of the world.”

TDA Global Cycling gives you the opportunity to see the world in the company of adventure seekers.

Participants range in age from 18 to 81 years old. People of all backgrounds, from retired veterans to students on holiday, want to explore the world and build friendships. Henry noted that the tours are usually about 60% men and 40% women. Participants tend to be independent and self-reliant, and they enjoy the company of cyclists with similar interests and experiences on the tours.

“It’s not just cycling. The people who come to the tours are hard-core about adventure,” Henry said. “They’re not afraid to go and do things like this.”

A Team of Problem Solvers Supports You on the Journey

At TDA Global Cycling, a strong support system fosters unique journeys to all corners of the globe. Henry described team members as self-motivated and calm under pressure. “It’s a great team,” he said. “We’re all happy to get up for work every day, so that’s a good feeling to have.”

The company is decidedly not corporate — because that’s the environment Henry was escaping when he started the tours. Instead, TDA offices maintain an easygoing vibe, and individuals who work there are open-minded, can-do kind of people. They love adventure, and they’re good at problem-solving on the fly if an issue arises on the road.

Many TDA tour cyclists strike a victorious pose once reaching a beautiful destination by bike.

Eight full-time staff members and an army of contractors come together to make the tours as simple, safe, and enjoyable as possible. Staff members come from all walks of life — from a former bartender in Canada to an English teacher from Brazil.

You don’t have to worry about the logistics of your trip with these experienced cyclists to guide you. Wherever you go, you’re sure to have a memorable time. As Cristiano Werneck, a team member from Brazil, said in his bio: “The worst day on the road is better than the best day in the office!”

Cyclists with TDA Global Cycling get to see the world in all its vivid beauty. You can breathe in the fresh mountain air in outside Beijing or feel the soft sprinkle of rain in Cape Town, Africa. Instead of whizzing by in a car or bus, cyclists have hours and hours to take in the sights, explore the local scenery, and experience the countryside in sensational detail. What could be more romantic?

If you go on a tour with a date, you’ll have a memorable trip to talk about for years to come. If you go by yourself, you’ll have the chance to meet many interesting, worldly, and adventurous souls on the road. Traveling together is a terrific way to bond and make lasting connections. Many cyclists enjoy TDA’s tours so much that they return again and again to go on different excursions and see familiar faces each time.

TDA Global Cycling tours offer singles and couples an unforgettable way to get away from it all.

A welcoming community atmosphere surrounds participants and makes it easy to make friends while sharing stories over dinner or riding for miles alongside one another.

In 2002, Henry branched out from NGO work and brought his passion for African culture to cycling enthusiasts everywhere. In doing so, he opened the world up to people who long to travel differently. “We’re enablers for anyone looking to take an adventure,” he said. “TDA Global Cycling provides a support system to help people have an experience that changes their lives.”