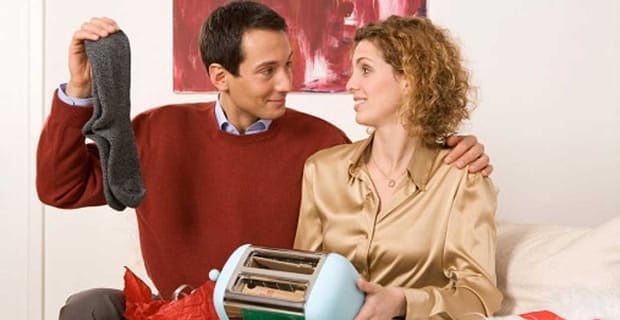 The 6 Worst Valentine’s Day Gifts to Give to Women

Valentine’s Day is around the corner and the pressure surrounding the most romantic day of the year can be tricky and ridden with anxiety for both singles and couples with big expectations.

For guys, gift-giving has always been a challenge. Overwhelm her too soon and she’ll turn ice cold. Forget to bring a card and she won’t go out with you again.

Before you open your wallet, search online or stop in for a last-minute gift, here are some items I suggest you nix from your list, along with some of the worst Valentine’s Day gifts our readers have received.

Sure Valentine’s Day is romantic and you’re hoping to have her for dessert when you both get home.

However, if a man gives a woman lingerie, it sends the message that all he cares about is sex and not falling in love with her.

Before you scratch your head and ask yourself who would give such a gift, one of my followers on Facebook did receive this from her husband of one year.

They went to sleep on opposite sides of the bed that night.

One reader was stunned when her beau gave her a large gift-wrapped box. Giggling, she said, “Is it bigger than a bread box?” She was disappointed that it had anything to do with bread.

isn’t something she’ll laugh about.”

Back to the kitchen she won’t want to go. Yes, cooking together is sexy, but let her buy her own spices when it’s time to whip up a meal on any other day than Feb. 14.

Nix the teddy bear in the mug that’s by the checkout stands at the grocery store.

If it’s something you’d buy your 7-year-old daughter, it’s not the kind of gift to give to your sweetheart.

What gifts will you be giving your Valentine this year?

3 Mindsets to Get You Through New Year’s Eve