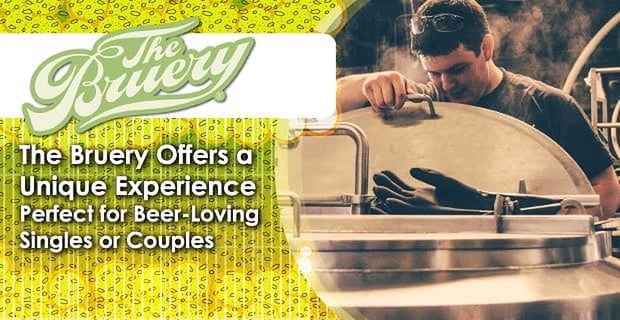 The Short Version: The Bruery is an innovative beer brewing company based in Orange County, California, that makes an excellent location for a date. It was founded by Patrick Rue, a homebrewer who was interested in crafting beer with unique flavors, and he’s found plenty of success. The brewery now has two locations in California where beer aficionados can sample its unique libations, including barrel-aged beers. At The Bruery’s headquarters, you can go on a brewery tour and sample numerous beers along the way — making it a fun date spot for couples and a great way for singles to meet fellow beer enthusiasts. The Bruery also offers several clubs, dubbed societies, for those who want access to discounts, exclusive brews, and special events.

When Patrick Rue began experimenting with homebrewing, he quickly went from a hobbyist to someone who was obsessed with creating new beer recipes.

As he went through law school, Patrick worked on the creative concoctions during his free time and even began winning awards. By the time he finished school, he had decided to skip the California bar exam and instead pursue his beer dreams and open a brewery.

“The culture he’s built is around that innovation and desire to explore,” said Joel Kennedy, Marketing Manager of The Bruery.

The Bruery had humble beginnings; Patrick opened it in 2008 as a small, friend-and-family-run business. Since then, it has steadily grown while maintaining a boutique feel by specializing in barrel-aged and experimental ales. The Bruery expanded to a second location in California and also opened a store in Washington, DC.

“The Bruery was founded on the excitement that Patrick felt in those first years of homebrewing, and we continue to strive for that same passion in every aspect of our business today,” the brewery’s mission statement reads. “We never stop challenging ourselves to develop distinctive and imaginative beers, constantly pursuing improvement in all that we do.”

The primary Bruery location is in Placentia, California, which is in Orange County. You can tour the original brewery at this location on Saturdays and Sundays. You can also visit the tasting room, where there are 40 different beers on tap.

Joel said all sorts of visitors come to The Bruery; some are locals who visit anywhere from one to five times a week to see what new brews are on tap. But The Bruery is also a destination for beer-loving out-of-towners.

“We see people of all walks of life because beer knows no boundaries, and having more than 40 different beers on tap at a tasting room ensures we have something for everyone to enjoy,” he said.

The Bruery has two tasting rooms in California as well as a storefront in Washington, DC.

The second location, called Bruery Terreux, is in Anaheim, California. The focus here is slightly different than the main Bruery, as it’s dedicated to brewing wild and sour beers. This location is often a destination for beer fans passing through Southern California, especially if they’re headed to nearby Disneyland.

Recently, The Bruery opened up a storefront in Washington, DC. While you can’t participate in a beer tasting there, you can pick up online orders and purchase a variety of innovative bottled beers to drink at home.

Because it began as an experiment with flavors, styles, and brewing methods, creativity is in The Bruery’s DNA.

“The Bruery specializes in barrel-aged and experimental ales, so there are a lot of flavors and combinations and things aged in oak that many taste buds have never experienced,” Joel said.

When The Bruery debuted, it came out swinging with flavors people had never tasted.

“We have a legacy of doing that year after year and one-upping ourselves with creative concoctions. It may be fruit and barrel-aged imperial stout — which can be closer to 20% alcohol by volume, so it’s like like drinking a fine port or fine wine — or beers that are inspired by horchata,” Joel said. “We have a bunch of culinary flavors and things that get people talking about pairing food with.”

The Bruery creates beverages inspired by a variety of different breweries and beers at its headquarters. According to The Bruery’s website, “We’re mostly driven by experiences of flavor. Sweet potato pie, Thai food, the intense aroma of freshly-picked lavender, among many others, are our primary influences.”

The team aims to create complex flavors from simple ingredients. The Bruery has year-round beers, seasonal beers, and beers aged anywhere from six to 18 months in barrels that were previously used to age distilled spirits — which impart interesting flavors on the brews.

One reason why beer fans love visiting The Bruery’s tasting rooms is that they can sample so many unique beers that run the gamut in terms of type and flavor.

“We’ll see some people go into the more sour beers that we brew at Bruery Terreux. If people like lemonade or fruited beers, we have a lot of options in that category,” Joel said. “Others gravitate toward bigger, heartier stouts and stronger IPAs.” The Bruery also does occasional collaborations with other breweries to create new recipes.

The Bruery offers tours at both of its California locations every Saturday and Sunday for only $5, and Saturday is the most popular day for a tour, according to Joel.

The tour includes a souvenir glass and several samples along the way. “People learn all about our company’s origins, how the beer is made, and the path from brewing to bottle,” Joel said.

After the tour, stop by the tasting room, where you can create your own flight of beer. Joel said The Bruery was one of the first breweries to embrace the idea of tasting several beers at a time. You fill out a custom flight form and choose any five beers out of the 40 on the menu.

A tour of The Bruery is a great way for couples to get to know more about beer — and each other.

“If people are coming here for a date or with a group, a flight helps them experience so many more flavors — especially the ones outside of their realm,” he said.

Visiting The Bruery is also perfect for couples interested in getting into beer, but who haven’t found something they really like. Joel said that everyone working for The Bruery has had “an aha moment” when they realized they never knew beer could taste like this.

“We’re like ambassadors trying to help people find that aha moment,” Joel said. “The easiest place for people to have that experience is at a tasting room, so turning them on to different beers, finding out what kind of flavors they like, and then matching that up with a beer to meet their profile is pretty cool. When that light bulb goes off, you can see it, and that person is hooked for life.”

The Bruery Has a Societies Program for Avid Beer Enthusiasts

The Bruery runs several different beer clubs, called societies, for enthusiasts who love its unique offerings. Joining a society is a great idea for couples who want to expand their beer knowledge together, and membership includes exclusive discounts, perks, and events.

First, there’s the Preservation Society, which is a quarterly beer club. Members receive a specially curated package of three beers every quarter at a 10% club discount. Members also have access to exclusive sales at the two California tasting rooms and the DC store. Additionally, every fall, members of the Preservation Society can advance to the next membership level — the Reserve Society — before it’s available to the public. That can be a significant benefit, as the Reserve Society often fills up quickly.

The Reserve Society has a limited number of slots and offers even more benefits for the craft-beer obsessed. Once it fills up, it is closed to new members.

The third tier is The Hoarders Society, which “is an exclusive club of our most passionate fanatics,” according to The Bruery’s website. You can only join by special invitation, and members get first and full access to beers from both California locations. This includes beers exclusive to The Hoarders Society. Members also get more substantial discounts and other privileges only available to this particular tier.

Joel said the societies are perfect for couples wanting to go deeper into the world of beer and taste flavors they couldn’t otherwise experience. In the future, the brewery plans to open more spots in the societies.

But society member or not, you and that special someone can head over to The Bruery for a beer and conversation. That’s why Patrick started brewing his unique beers in the first place: To give people something to connect over.