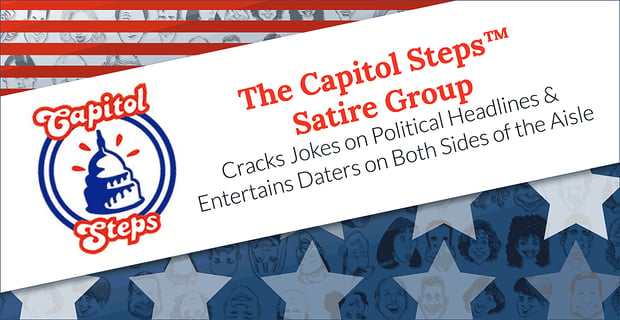 The Short Version: Since 1981, the Capitol Steps satire group has ribbed politicians and poked fun at political scandals. The comedy troupe has recorded over 35 albums, featuring songs like “Secret Kenyan Man,” “The Mooch,” “Hillary Will Survive,” and “Putin on a Blitz.” You can hear these songs performed live at the Ronald Reagan Building in Washington, D.C., on Friday and Saturday nights as well as at other venues across the country. The Capitol Steps shows have our endorsement as some of the funniest out-of-the-box date activities for couples.

The Capitol Steps comedy shows have a reputation for outrageously funny political satire, but the shows can also offer a heaping helping of romance on top of the laughs. Sometimes the talented theater troupe acts as a wingman for couples with a healthy sense of humor.

One night, an actor playing President Bill Clinton had a romantic agenda prearranged with a man in the audience. With Bill’s famed Southern charm, the actor encouraged a woman in the audience to come up on stage with him. She didn’t know what was happening, but she played along with the bit and laughed as he flirted with her. “What are you doing after?” he asked with a suggestive smile and wink.

For more than 30 years, the Capitol Steps comedy shows have tickled the funny bones of Democrats, Republicans, and everyone in between.

That’s when her boyfriend came barreling up on stage. “You can’t talk to her like that,” he said with exaggerated indignation. “That’s the woman I’m going to marry!” With that, he pulled out an engagement ring and proposed on the spot. The audience erupted in applause, and she said yes.

The Capitol Steps comedy group is always up for playing along with a side-splitting proposal idea like that one. This fun-loving organization is all about giving people a smile with its spot-on impressions, witty songs, ironic skits, and politically charged humor. Its shows are for the people, by the people, and its jocular spirit appeals to couples who want to take a break from partisan politics.

The Capitol Steps Co-Founder Elaina Newport said she often sees couples laughing together in the audience, and the weekly shows have become a date-night staple for politicos in D.C.

“When you’re dating somebody, you’ve got to make sure they have a sense of humor,” she said. “That’s very important.”

Daters can head to this comedy show to lighten their moods by listening to a ballad sung by Vladimir Putin or a show tune led by Bernie Sanders. When Washington’s political discourse gets heated, the Capitol Steps comedy group throws a water balloon at the system to make people laugh and put the “mock” back in democracy.

A Party Gag in the 1980s Has Won the Popular Vote

The Capitol Steps comedy show traces its history to December 1981 when a group of Senate staffers decided to plan a humorous Christmas party. They put together funny skits and song parodies that made jokes about the news of the day. These young staffers worked for a Republican Senator named Charles Percy, but they weren’t afraid to poke fun at their own party and the newly inaugurated President Reagan.

The current Capitol Steps cast has a collective 62 years experience working on the Hill in D.C.

Their shtick was a hit, and other Washington staffers soon wanted the group to perform at their holiday parties. Thus, the Capitol Steps traveling satire circus was born.

Elaina has been cracking jokes about the government and politics since the 1980s, and she said the Capitol Steps has never run short of material no matter who was in office.

Today, the Capitol Steps performers represent a collective 62 years of House and Senate staff experience. These performers pool their rainbow of talents and oddball perspectives to create a memorable comedy show that’ll bring some much-needed humor to Washington.

“There are times when the show is hard to write because the headlines are so serious,” Elaina said, “but that’s when it’s important to write it.”

Not only has the Capitol Steps entertained folks on both sides of the aisle, but its shows have also led some people to fall in love and walk down the aisle. Two performers met because of the satire group and are now happily married.

Side-Splitting Shows at the Reagan Building on Weekends

If you’re tired of booing party leaders at restaurants in D.C. and want to shake things up, why not head to the Ronald Reagan Building and International Trade Center on Friday or Saturday for a live political comedy show? Every week, the amphitheater fills with as many as 600 people looking for a good laugh.

The Capitol Steps show starts at 7:30 p.m. and lasts around two hours. You can buy tickets online ahead of time, or you can pass the buck until the day-of and then get your tickets at the will-call window, which opens at 6:15 p.m. on the night of the performance. Tickets cost $40.50 per person, plus service charges.

Don’t know when your significant other is free? Then you can get a gift certificate for two tickets to a future Capitol Steps show and surprise a loved one with a funny date-night idea. The troupe even offers a free CD for every gift certificate worth at least two tickets. Now that’s a handout even hard-line Republicans could get behind!

You don’t have to live around Pennsylvania Avenue to enjoy a Capitol Steps show. The troupe frequently brings its shows to colleges and universities from coast to coast. Though the shows appeal to people of all ages, college-aged students seem to particularly revel in the irreverent performances and quick-witted satire. These out-of-town performances draw hundreds of people of all ages and backgrounds.

If you want a taste of the off-kilter, politically incorrect yucks you can expect at these shows, just read through the cast bios, which are full of humorous asides and colorful background information.

“Although she worked for two Republicans, Elaina considers herself an extreme moderate,” according to Elaina’s bio. “Although she is married to a former Clinton appointee, she denies responsibility for having caused any of the scandals which later became song material.”

A Bipartisan Effort to Get Americans Laughing Again

The Capitol Steps actors don’t take sides or have an agenda beyond making people laugh. They make fun of Republicans, Democrats, and everyone in between, so no one can accuse them of playing politics in their political plays.

Elaina pointed out that the party in power may often take more flack than anyone else, but that’s only because they’re the ones taking action, making mistakes, and giving the comedy troupe good material.

“We try to be bipartisan, but, you know, the party in power is always funnier,” she said. “If you think we’re hard on Trump now, you should’ve seen our shows about Bill Clinton.”

The Capitol Steps has made punchlines out of President Trump’s tweets, sex scandals, foreign blunders, and crazy hair days.

If you flip through the Capitol Steps catalog of performances, you’ll find jokes about every President from Ronald Reagan (“Dutch the Magic Reagan” and “Ronald the Red-Faced Reagan”) to Barack Obama (“Barackin’ Around the Christmas Tree” and “Obama Spice Man”) to Donald Trump (“Wake Me Up in Mar-a-Lago” and “I Want a Man with a Small Hand”). No one is safe from these jokesters, and they can find the funny in any president, congressional leader, or foreign dictator.

The actors parody political and world events to reflect where we are and why it’s funny. For instance, during the 2016 election, the Capitol Steps broke through the fake news and ridiculous headlines with a trumped-up song called “Shut Up and Vote for Me.” A performer playing then-candidate Donald Trump came out to defend the rambling remarks he’d made during his presidential campaign announcement.

“I will put casinos in all government buildings,” he promises. “I would put dice tables in the U.S. Capitol building, but it’s already full of craps.”

The Capitol Steps Puts the “Mock” in Democracy

The Capitol Steps troupe covers the major headlines, election cycles, and Twitter trends impacting American politics. The performers encourage citizens mired in partisan debate to look on the funny side. You don’t have to be a liberal elite or Tea Partier to find these songs and skits amusing. Americans of all backgrounds can come together at these shows and agree that Bernie Sanders and Donald Trump both have ridiculous hair.

Whether you’re going on a first date or looking to propose, the Capitol Steps show can offer a comical backdrop for any romantic moment. In these trying times, a moment of levity is more important than ever.