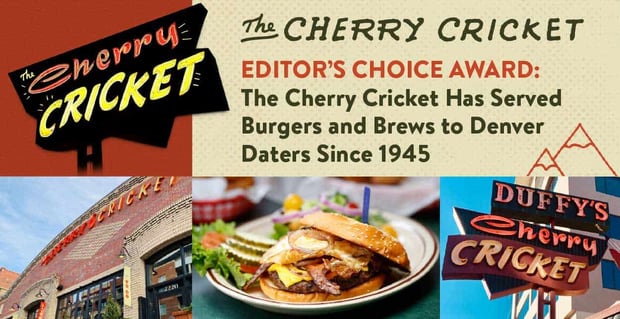 Editor’s Choice Award: The Cherry Cricket Has Served Burgers and Brews to Denver Daters Since 1945

The Short Version: Mary Zimmerman opened The Cherry Cricket out of her home kitchen in 1945 to serve food to local workers in Denver, Colorado. Over the next 75 years, the restaurant earned a reputation for its delicious burgers, Mexican food, hot wings, and casual atmosphere that makes it perfect for a date. The Cherry Cricket became so popular that even after a fire damaged the restaurant in 2016, locals begged the owners to reopen it with the same look, feel, and menu. For its unique vibe and tasty cuisine, The Cherry Cricket has earned our Editor’s Choice Award.

Eventually, her food grew so popular that Mary opened a larger location in a building nearby. In the 1960s, Bernard Duffy purchased the restaurant and turned it into one of the first sports bars in Denver. At that point, the restaurant began serving cocktails and beers along with its famous burgers — a tradition that continues.

While couples have flocked to the restaurant for generations, no one seems to remember how The Cherry Cricket earned its unusual name. According to the restaurant’s website, the owners like it that way. That’s because the restaurant keeps the focus on the patrons who make it a great place to hang out.

That bond with the community became even more evident in November 2016 when a small fire broke out at The Cherry Cricket. Though none of the 200 patrons inside at the time were hurt, the fire damage forced the restaurant to close for five months of repairs.

The Denver institution was so beloved that customers who rushed out the night of the fire returned to pay their outstanding bills.

“There’s a lot of love in this building,” said Heidi Ziepprecht, The Cherry Cricket’s General Manager.

The fire did enough damage that Heidi and her team had to remodel before reopening. But diners insisted that they didn’t want the restaurant to look different than it had for the last seven decades.

“When we went to rebuild it, the public sentiment was for us to keep it exactly the way it was. So, the only thing we redid was the bathroom. Other than that, the restaurant is pretty much the same as ever,” said Heidi.

A Denver Institution That Has Stood the Test of Time

Since the beginning, The Cherry Cricket has served up memorable burgers made with local ingredients. Perhaps the restaurant’s most famous burger — The Little Cricket Burger — is a cheeseburger topped with a large roasted green chile.

Another favorite is the 303 Green Chile Relleno burger, made with white cheddar, chile relleno, and a brioche bun. The burger helped The Cherry Cricket win Denver’s Burger Battle, a local competition that judges burger-slinging eateries until only one burger remains.

For daters who want to order something unique, the restaurant has plenty of burger topping choices. It offers many different types of cheese and veggies, along with more unusual ingredients, including corned beef and sauerkraut.

The Cherry Cricket serves up more than burgers, too. Its chili cheese fries are a shareable option that lots of couples choose.

The Cherry Cricket’s burger menu has something for everyone, and diners can customize their creations.

“Everybody knows us for our burgers, but we have wings and green chiles, too,” Heidi told us.

Recently, Oprah picked the restaurant to be part of her 2020 Vision Tour in partnership with Weight Watchers — a wellness campaign that demonstrates how to lose weight without depriving yourself of tasty food. At The Cherry Cricket, for example, she picked the vegetarian green chile offering and a small salad.

As a nod to the years it spent as a sports bar, The Cherry Cricket also has a varied drink menu. The restaurant serves plenty of local Colorado brews, including the Colorado Native Amber. It also serves cocktails that pair well with its menu items, like the Hopped Up Old Fashioned, served with bourbon, housemade bitters, demerara sugar, orange peel, and whiskey-marinated cherries.

Couples looking for a classic combo of a burger, fries, and a milkshake, also won’t be disappointed. The Cherry Cricket even offers boozy shakes, including The Southern Sweetie, made with pecan whiskey and candied pecans.

A Welcoming Place for Generations of Burger Lovers

Since 1945, The Cherry Cricket’s neighborhood has changed considerably. In the 1940s, the area was mostly working-class and undeveloped, earning it a reputation for being outside of the city’s core. But the area is swiftly changing.

“Our neighborhood is up and coming,” Heidi said.

With that change has come a wave of new diners. Stockbrokers and workers come to eat and do business during lunch at the restaurant, and more families with kids visit, too.

And, of course, locals from all around Denver make regular trips to The Cherry Cricket.

“I’ve been here for 13 years, so I’ve seen people who have eaten here in high school and now come back in their mid-30s,” said Heidi.

The restaurant offers a laid-back atmosphere for casual date nights.

The restaurant’s friendly atmosphere attracts plenty of out-of-town tourists, as well. Many visitors have made the pilgrimage after seeing the restaurant on Guy Fieri’s show “Diners, Drive-Ins and Dives” on the Food Network.

One couple even shared the story of how they make a trip from Las Vegas to The Cherry Cricket each year just for its burgers. Now, they’re passing on that tradition. They recently invited their daughter and her wife to travel with them to Denver, and now she understands why her parents take that regular flight.

As with many regulars, The Cherry Cricket staff is part of the family.

“We all get along, but we have our family moments, too,” Heidi said with a laugh.

The Cherry Cricket proves that a restaurant doesn’t have to have white tablecloths or a candlelit ambiance for it to be a go-to spot for date night. Its comfortable atmosphere has helped many Denver couples connect over tasty food and drinks.

“We’re unpretentious and casual. And our atmosphere has something for everyone,” said Heidi.

She said many couples have been making regular stops at The Cherry Cricket for years. Some have come on their first date, then continued to visit as a serious couple, and now return with their kids.

One couple who had their first date at The Cherry Cricket recently returned to celebrate their 35th wedding anniversary — and even requested to sit at the same booth where they first connected.

It’s not only the regulars who have found love at the restaurant, either.

“Our bartenders met here five years ago, and they just got engaged,” she says.

Couples have another reason for grabbing a burger at The Cherry Cricket, as the restaurant opened its downtown location in 2018. Whether couples are catching a game or want to grab some takeout, the second location has many of the same offerings as the original, though the location is a little fancier.

“We like to joke that our second restaurant is what the Cricket would look like if he got up and went out on the town. They have a nice fish tank,” Heidi said.