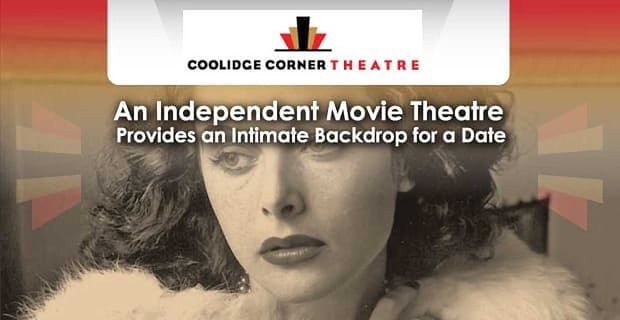 The Coolidge Corner Theater: An Independent Movie Theater Provides an Intimate Backdrop for a Date

The Short Version: The Coolidge Corner Theatre is a cherished date destination for couples in Brookline, Massachusetts. This independently operated, not-for-profit theater treats audiences to an old-school movie-going experience. You can check the showtimes to find a cult classic, documentary, and other screenings you can’t find just anywhere. From silent films to sing-along flicks, these movies represent the best of the best in every genre imaginable. The Coolidge’s friendly staff loves movies and puts together can’t-miss programs and film series to give movie buffs high-quality cinematic entertainment. If you want to up the quality of your dates, you can go to the Coolidge and get tickets to a romantic or thought-provoking screening in the heart of New England.

The Coolidge Corner Theatre is a longstanding and well-respected cultural hub in Brookline, Massachusetts, but it wasn’t always so universally popular. In 1933, when locals heard about the plans to remodel an old church into a movie palace, some worried about the future of the town. They equated movie theaters with licentious behavior and campaigned against its construction.

Fortunately, the protest wasn’t enough to halt progress, and the art deco style movie palace has delighted moviegoers ever since. The Coolidge was the community’s first movie theater, and it was a hit.

The Coolidge soon became a favorite haunt for movie buffs in town. When there was talk of the owners closing its doors in 1989, so many people rallied behind the movie theater that the city created an independent not-for-profit group to save and preserve the Coolidge for generations to come.

Throughout its long history, the Coolidge has offered members of the community a place where they can escape the everyday and enjoy an old-fashioned cinematic experience. Countless couples have gone on dates at the theater, sharing popcorn, holding hands, and bonding over a love of classic and independent films.

“The Coolidge Corner Theatre has played a unique and indelible role in the development and social history of the town of Brookline,” according to the theater’s website. “The Coolidge has, in fact, experienced nothing short of a renaissance, transforming itself from a down-at-the-heels but beloved experimental arts venue to a stable, prosperous, and highly valued institution in the community.”

Dinner-and-a-movie dates are popular for a reason — they’re fun. You get a nice balance of conversation and entertainment. After talking up a storm at dinner, you can relax in a darkened theater and maybe snuggle up together as you watch a story unfold. A good film gives you a shared experience you can discuss and use to find common ground.

Movies are full of opportunities to connect with someone. Maybe you both love wacky comedies or sci-fi adventures. Maybe you sympathize with the same characters. Maybe you spotted the same plot hole. Whether you’re planning a first date with a new love interest or a weekday date with a spouse, going to the Coolidge is a fantastic way to unwind with someone special.

The Coolidge shows independent films, documentaries, and cult classics to elevate the cinematic experience. Only the best movies make it onto this screen — you won’t find big franchises or flops here. The Coolidge also doesn’t show previews or commercials. Instead, it fills its 14 theaters with culturally significant films geared toward thoughtful audience members.

The luxurious and old-school look of the Coolidge provides a unique backdrop for a date.

From “The Terminator” to “Mean Girls,” the Coolidge gives young moviegoers a chance to see beloved blockbusters on the big screen. You can also catch a screening of the latest Wes Anderson or Woody Allen film.

Tickets cost $13.50 for adults, but members get a $3 discount on regular tickets as well as other benefits. You can become a member to support the Coolidge Corner Theatre’s not-for-profit work.

“What makes the Coolidge a great date-night destination is the content we show,” said Beth Gilligan, the Director of Marketing and Development for the Coolidge Corner Theatre Foundation. “We try to be creative and show thought-provoking movies that make excellent fodder for conversations.”

Throughout the year, the Coolidge hosts frequent special events for families, couples, and children. Whether it’s a movie under the stars or a Q&A session with a filmmaker, movie buffs in town flock to these special screenings and events. The Rewind series is particularly popular because it showcases old VHS hits (including “Jurassic Park” or “Ferris Bueller’s Day Off”) on the big screen. Plus, the Coolidge partners with a local sushi place and brewery to give members complimentary food and drink at the after party.

The Coolidge Corner Theatre screens everything from throwback films to stage performances.

Couples can make their nights more memorable by attending one of the Coolidge’s film series. You can check out a midnight screening of an avant garde film or see a beautifully restored silent film at the theater.

On Valentine’s Day, the Coolidge shows rom-com classics, including “When Harry Met Sally,” to put couples in the mood. In 2018, the theater even served wine and chocolate-covered strawberries as a special treat for young lovers at the cinema.

“Movies are a terrific gateway to conversation,” said Beth. “You can unwind at the movies and talk afterwards over coffee or dinner. It’s just a nice, comfortable way to spend time with someone.”

Fostering a Community of Enthusiastic Moviegoers

Since 1933, the Coolidge has been a cherished hangout for people young and old. Pretty much everyone in town has grown up seeing movies at this independent theater, munching on fresh buttered popcorn that Julia Child once dubbed “the best popcorn in Boston.”

Many people love the Coolidge, and many love stories have blossomed in its theaters. Beth said two of her friends went on their first date at the Coolidge years ago. They’re now happily married and take their children to the theater every Sunday. The theater is a fixture in the lives of so many families in Brookline.

Anthony J. Fiore said he and his fiancé were deeply impressed by their visit to the theater. “It’s kinda perfect. Small, but not too small. Rather comfortable. Intimate,” he wrote in a Facebook review. “Coolidge Corner Theatre has a charming, home-grown feel to it that I’m looking forward to experiencing again.”

“The Coolidge is our favorite part of living in Brookline.” — Damon M., a local moviegoer

“The theater itself is reason enough to go,” said Damon M. in a review. “Like stepping back in time to the heyday of going to the movies. The staff are great, and it feels like a real community.”

“If you have any appreciation for a classic feel, you just won’t want to go home after the credits roll,” said Jefferson P. in a review. “Overall, a positive feel for someone who enjoys a classic feel and good conversation with fellow moviegoers.”

“Everyone here is motivated by a love of films,” Beth told us. “The genuine enthusiasm and love of this place makes us stand out. People really take pride in the Coolidge.”

Since 1933, the Coolidge Corner Theatre has given Brookline residents something to talk about and enjoy together. The independent theater has captured the attention and imagination of audiences of all ages by offering a tried-and-true cinematic experience. You can treat yourself to old-school or cutting-edge entertainment by taking a date to the Coolidge.

Every day of the week, the Coolidge showcases a series of thoughtful, amusing, and original films that you can’t find at just any theater. Whether you show up during a matinee showing or a special event, you’ll be amazed by the friendliness, quality, and entertainment offered by this not-for-profit theater.

“We’re proud to be an anchor in the community,” Beth said. “People really care about this organization. The Coolidge feels like home to them.”