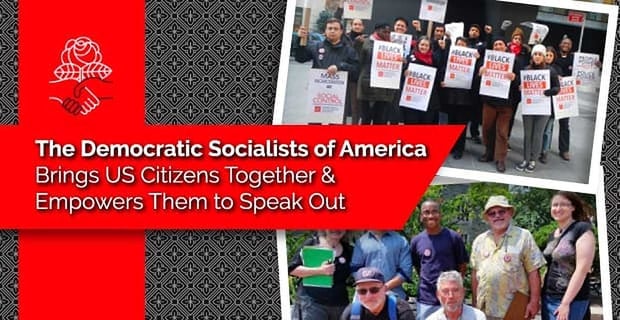 The Short Version: Boasting over 35,000 members, the Democratic Socialists of America has become the largest socialist organization in the US — and its political influence is growing as rapidly as its membership. DSA has chapters in all 50 states and is working to implement a nationwide electoral strategy that will empower socialist-friendly politicians running for office. Anyone can join this progressive movement and support social solutions through the ballot box as well as in their neighborhoods. Whether you’re a passionate and proud socialist or simply curious about its democratic ideals, you can get involved in a meeting, protest, or community event to see what DSA is all about. The organization’s charitable work and activist projects appeal to politically minded individuals who want to be part of something bigger than themselves, so it’s a great opportunity to meet people who share similar values.

Russ Weiss-Irwin joined the Democratic Socialists of America (DSA) in 2014 when he was a senior at the City College of New York. He was a politically active student with an interest in progressive and socialist values, so he felt right at home in the organization.

He said he liked that DSA had chapters across the US and made its internal elections entirely transparent. Though his socialist friends criticized the leadership for endorsing Democratic candidates, Russ applauded the group’s commitment to lowercase-d democratic values.

The Democratic Socialists of America unite everyday citizens who share a vision of a free, democratic, and humane society.

“Even if DSA wasn’t as radical as some of the other groups, it meant a lot to me that it really walked the talk of being democratic,” Russ said. “I ended up running for national leadership in DSA. Between 2015 and 2017, I was on the National Political Committee and played a big role in trying to manage our growth from 5,000 members to 25,000 members, which was an adventure unlike any I’ve ever had.”

Rather than sitting on the sidelines, Russ became heavily involved in politics, and he met dozens of people who agreed with him on the issues. He now lives in Boston where he works as a public school teacher and participates in DSA events as a regular member.

DSA is a rallying point for political organizers, socialist leaders, and other democratic-minded people throughout the US. The group has made a name for itself as the largest socialist organization in the country, and it’s only getting started. You can get involved with DSA to meet people, like Russ, who are working hard to make a positive difference in society.

Once he graduated college, Russ helped establish a DSA chapter in New Jersey. He moved to the liberal state with his then-girlfriend and reached out to local DSA members on social media. They began to get together for meetings, social gatherings, and political events. After former New Jersey Governor Chris Christie made an anti-refugee statement in the fall of 2015, Russ helped organize a 60-person demonstration in front of the former governor’s house.

DSA helps individuals find outlets to express their ideals and have an impact on politics, public opinion, as well as people’s lives. You can get involved with a DSA chapter in your community and meet socialist activists who care about the future of modern society.

“DSA is basically a group of people who are connected by wanting to build a totally different kind of world and also make important changes right away, right where we live,” Russ said.

DSA has over 100 chapters from coast to coast. These community and campus groups organize events that support social change in a number of ways. It isn’t all picketing and politicking. DSA members make an effort to live up to their egalitarian values by doing charitable volunteer work in their local areas.

Russ said the chapter in New York joined with a church and black empowerment group to distribute food to poor people living in Harlem. Other chapters have organized free clinics to fix people’s brake lights, collect clothes for the homeless, and offer tutoring or other valuable services to underprivileged people.

“We also work for immediate changes in the laws and policies where we are,” Russ told us. “In New Jersey, we did a lot of work around the fight for a $15 minimum wage and paid sick days.”

Working to Enact a Power Shift in the Political World

Active in cities across the country, DSA has influenced local, state, and federal elections from Atlanta to Pittsburgh and from Austin to Fargo. The DSA Electoral Committee chooses to back certain political candidates based on their support of critical socialist values.

“We work to get socialists and socialist-friendly politicians elected to office, both to build power locally and to get our ideas out more broadly,” Russ said. “It’s really amazing.”

You can always find DSA members on the front lines in the battle for equality, justice, and democracy. DSA supports workers on strike, showing up to picket lines to lend support to the cause of teachers, fast-food workers, nurses, and other professionals who deserve better wages or benefits. DSA’s current campaigns include Medicare for all, strengthening unions, and implementing a national electoral strategy.

DSA isn’t just concerned with the now — it’s also looking toward what comes next. Once the organization has achieved its short-term goals and secured positions of power, up-and-coming socialist leaders like Russ recognized that they need to have a plan for how to implement a new system to rival capitalism. A big part of DSA’s work is to educate members about the oppressive elements of capitalism and the potential solutions in socialism.

As Russ said, “To imagine a socialist world, where we can set up society so that everyone has enough, democracy can be in our workplaces and schools and our families, where we don’t need prisons or police or borders or money. That takes a lot of re-thinking and re-imagining and discussing and listening.”

“DSA is a major organization on the American left with an all-embracing moral vision.” — Cornel West, American philosopher and activist

When Russ first joined DSA in 2014, the organization’s primary problem was getting people to join and getting the public to understand the fundamentals of the democratic socialist agenda. Then, thanks in part to the rise of Bernie Sanders, DSA’s membership rose dramatically as thousands of people sought an alternative to the dog-eat-dog capitalist system. Now DSA has established chapters in all 50 states and faces the question of what to do with all that support, which political battles to fight, and how to keep the momentum going by winning short-term and long-term victories.

“I think the sky’s the limit for DSA,” Russ said. “Compared to the problems we had in 2014 or 2017, the problems we have in 2018 are really good problems to have, and the fact that we’re working to solve them makes me really excited for the future of DSA.”

Motivated by a Social Mission for the Good of All

Every week, hundreds of people join DSA because they believe in its underpinning values. People in urban neighborhoods and rural towns come together based on a shared understanding that capitalism has failed the common man and something has to change. It’s an exciting time to get involved with the DSA.

“Socialists are talking to each other and to other people and making plans and making a difference,” Russ said. “Just knowing that helps me feel a little less afraid, and it definitely makes me feel less alone — I’m one of 37,000 people and counting who are deciding to imagine a better world and fight for it.”

In his time with DSA, Russ has knocked doors for Bernie Sanders, collected donations for the homeless, and participated in just about every protest and community event the organization has to offer. He said starting the chapter in New Jersey and organizing movie nights and protests helped him make friends after just moving to the area.

“It was a great way to get to know folks and to have something purposeful to do together,” Russ explained. “More often than not, I would come home and think, ‘Yeah, I’m glad I got out of the house and did that.'”

Going to a DSA event can help you put yourself out there and connect with people who share similar socialist ideals. Plus, it’s a fantastic way to put your ideas into action. Some politicians in office today won their seats thanks to the field support and organizational power of DSA. This organization is changing hearts, minds, and politics — and it isn’t slowing down.

DSA Believes People are Better Together Than Alone

Over the last few years, DSA has gained momentum and become a force to be reckoned with in the political sphere. Its grassroots efforts have focused on a moral mission that has a universal appeal. The organization’s goals include leveling the economic playing field, fighting for civil rights, and supporting democratic values.

Additionally, through its community efforts and outreach, the socialist organization can also help people with similar values come together and build strong friendships and relationships. After all, the word “social” is right there in the name.

Everything DSA does is about empowering individuals to make the world a fairer, friendlier, and more democratic place to live. You can attend a meeting or a volunteer event to get to know the socialists in your area and become part of a movement to give “we the people” a voice in the US.

“Socialism is a view of the world that is about people coming together in communities to use our collective power to overcome oppression and build a world where we can all have enough and become better together than we are alone,” Russ said.