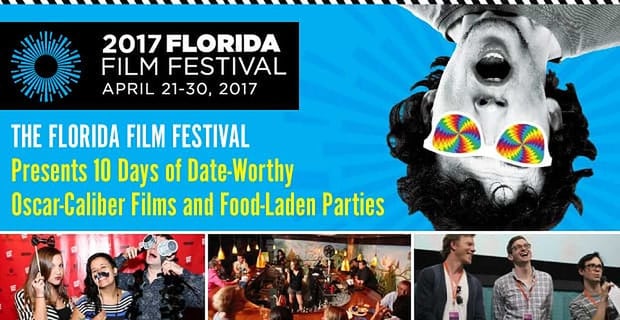 The Short Version: In the dimmed lights of a movie theater, moments of wonder and excitement capture the hearts of audiences young and old. Cinema’s best stories take us on imaginative journeys rich with feeling, and, when you go with someone, the experience becomes even more meaningful. Every year, the Florida Film Festival brings over 20,000 film lovers together to celebrate Oscar-caliber films at featured premieres, discussion panels, and themed parties. Maitland’s beloved Enzian Theater presents this 10-day event for filmmakers, celebrities, and movie buffs from around the world. During the Florida Film Festival, conversation flows easily between the attendees so you and your love interest can socialize, bond, and enjoy a memorable time at the theater.

Even though Netflix is slowly but surely taking over the entertainment world, I remain a steadfast fan of good old-fashioned cinema. I’m an avid theater goer, and I can never say no to a movie — a fact that boys often capitalize on to get me excited about a date. In 2013, my suitor really wanted to create a special experience, so he planned a date night at the Enzian Theater, an indie theater in Central Florida known for presenting a singular viewing experience.

Here, the audience settles back on couches and armchairs to enjoy an independent film or cult classic while waitresses come by with a full menu of indulgent options — from truffle Parmesan fries to raspberry beignets. My date and I split an artisan pizza and sipped wine as the lights went down and the drama unfolded.

The Enzian’s showings of cult classics, old blockbusters, and indie films invite conversation and connection in a comfortable, friendly, and romantic atmosphere. My date and I were definitely not the only ones holding hands in the theater that night.

At the Enzian Theater, couples sit comfortably on couches and armchairs while the movie plays.

For more than 25 years, the Enzian has hosted the Florida Film Festival every spring to bring film lovers together in the Orlando area. Thousands of attendees share their passion for movies at movie-themed parties and 180+ screenings of short and indie films.

Whether you and your date want to purchase tickets for particular showings or snag exclusive access to the theater’s most popular shindigs, you’ll find tons of entertaining options at the Florida Film Festival. People from over 36 countries travel to this cinematic event to soak in the friendly atmosphere and watch the year’s best popular, short, and independent movies.

The Florida Film Festival holds the distinction of being an Oscar-qualifying festival in the categories of Animated Short Film, Live Action Short Film, and Documentary Short Subject. “At our final party, the Awards Party, we announce the award-winning films for our festival,” said Valerie Cisneros, the Marketing Manager for the Florida Film Festival. “Those films are automatically placed in the nomination pool for the Oscars, so it’s a great way to get your foot in the door.”

Established for film aficionados and foodies in Central Florida, the Enzian’s tagline is “Film, Food, Friends,” and the Florida Film Festival lives up to that motto, with classic and independent films accompanied by delicious treats and lively conversations. The festival premieres more than 180 films, including documentaries and animated short films, with a locally-sourced menu to tempt Enzian attendees.

“It’s an incredibly beautiful theater,” Valerie said about the Enzian. “We really want to be a hub for cinema and entertainment in the Orlando area.”

Outside, the Eden Bar welcomes post-movie conversations and drinking, encouraging daters to linger in an intimate moment. A lot of networking goes on during the Florida Film Festival’s 10 days of movie premieres and parties. “You can have a drink and talk about movies,” she said. “We have filmmakers from all around the world coming to present their films and engage with audience members.”

The Florida Film Festival throws an opening night party to kick off their event on an excited note.

The Enzian specializes in creating dynamic experiences for filmgoers, and the spring’s festival is no exception. Their themed parties offer guests good food, signature cocktails, live music, and quality entertainment. From opening night to the awards ceremony, all the events encourage film lovers to mingle in a vibrant and social setting.

You can buy your tickets online anytime for the next festival — the event’s organizers release their calendar of shows in March, about three weeks prior to the event — and delight your date with something out of the ordinary.

During the Florida Film Festival, the Enzian presents roughly 54 feature films and 126 short films, the tickets for which can be bought individually or in extra-value packages. The most exclusive passes, called the Film Lover and the Producer, offer early entry to films and priority access to discussion panels and parties throughout the week.

The most popular showings often sell out, Valerie warns, so it’s best to arrive at least 30 minutes early to ensure you get a seat. Savvy daters may want to become passholders or show up even earlier (perhaps getting wine or beer to take to your seats) to stake a claim to the coziest couches down in the front.

You can support the theater and give someone special the gift of an unforgettable cinematic experience by buying a VIP experience and get first dibs to everything the Florida Film Festival has to offer. The Producer pass is tax-deductible and includes a special Founders Dinner with the Tiedtke family who started this whole tradition of movie merriment.

“Passes give you ticketless entry to the festival, and every level comes with its own perks,” Valerie explained. “You can get the most bang for your buck with the Film Lovers Pass, a $1,160 value for $650, and get early access to almost everything, and you’re invited to every party.”

A Marathon of Fun — Thousands of Attendees Mingle at the Theater

Every year, the Florida Film Festival brings more movies, more events, more celebrities, and more fun to Orlando. Over 23,000 attendees flocked to the 2016 festival, and organizers expect those numbers to keep growing as the festival’s reputation in the filmmaking community grows.

It’s no wonder he enjoyed himself. Each jam-packed day of screenings brings audiences a host of sights, sounds, and tastes, all carefully crafted to wow audiences and remind people why they love the theater. “During the festival, we serve an incredible amount of food,” Valerie told us, “and we try to add something special and movie-themed for attendees.”

Actress Emma Stone raved about the friendly atmosphere, saying, “The audience was so welcoming and receptive” to the showing of “Paper Man” in 2009. “We feel very lucky to be here.”

“Our celebrity guests often see how warm and welcoming the environment is, and they end up having a great time,” Valerie said. “And sometimes they end up staying longer than they planned to!”

With a drink in hand and someone special by your side, you can’t help but have a good time at the Florida Film Festival — even if you’re not a movie-theater addict like I am. The Enzian’s celebrated movie marathon offers plenty of wonderful screenings, parties, and events ideal for anyone looking for a unique date.

People from all over the world travel to Maitland every spring to watch and discuss engaging films with friends, dates, and loved ones. Singles can meet like-minded movie buffs and easily start a conversation at the Florida Film Festival. All you have to do is ask “What’d you think of the movie?” or “What’s your favorite film?” and you’ll soon be chatting up a storm.

The Enzian Theater provides a romantic backdrop for singles and couples who love movies.

“I know there are people who’ve met and formed relationships at these events. We love to hear those stories,” Valerie said. “The festival is just a great way to meet people, mingle with friends, and bond with whoever you came with.”

At the Enzian Theater, you can snuggle up on the couches or share a decadent dessert while an acclaimed movie plays. Next spring, if you want to impress your date with a truly special time, why not escort him or her to the Florida Film Festival and take in a film or two (or 100)? For movie-loving attendees, these 10 days are packed with enthusiasm, conversation, and more than a little romance.