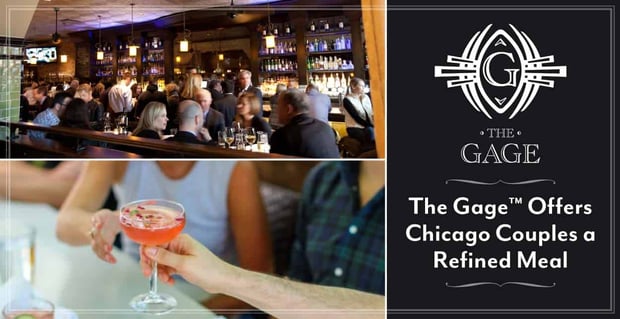 The Short Version: Since 2007, The Gage has been one of Chicago’s most sought-after dining experiences for couples. The restaurant has earned that reputation by serving classic cuisine with innovative twists, including sea scallops, roasted chicken, filet mignon, and apple cobbler. It offers a relaxed — yet refined — atmosphere where couples can choose to sit at the bar, in the backroom, or outside in view of Millennium Park. For its nods to the city’s history and modernization of classic American fare, The Gage has earned our Editor’s Choice Award.

The Gage is the kind of restaurant that makes people comfortable. It’s upscale, but not stuffy, and the food is classic, but not dated. And its diners are fashionable but not snobby.

Over the last decade, the restaurant — located across the street from Millennium Park in Chicago — has established a reputation as a renowned gastropub.

“The Gage has a relaxed yet convivial environment that makes it perfect for dates,” said Aaron Shirley, the restaurant’s Director of Public Relations.

The Gage offers options for any experience diners want to enjoy. If couples desire a lively atmosphere, they can sit at the front of the restaurant, which includes a large bar area surrounded by small tables. Those who want a more intimate dining experience can reserve a booth or table near the back of the establishment.

The Gage has an upscale, yet laid-back, vibe that is perfect for couples.

The Gage also fits the bill for a variety of special occasions — including birthdays and anniversary celebrations. Though it’s been open for more than a decade, The Gage has maintained its fresh feel and high quality.

The restaurant continues to receive glowing reviews, including a recent mention in the famed Michelin Guide.

“For more than a decade, this expansive, eclectic gastropub has catered to the Millennium Park crowds. Handsome banquettes and columns wrapped in celadon tiles lend a clubby allure, but the space’s buzzy vibe never feels overwhelming,” wrote the Michelin Guide inspector of the establishment.

Hospitality and History Built in to the Restaurant

Though The Gage serves up modern takes on classic fare, its owners and developers also understand the importance of history. The Lawless family owns the restaurant and has worked in the hospitality industry for decades, first in Ireland and then in Chicago. The Lawlesses owned and operated many bars, restaurants, and hotels before opening The Gage in 2007.

The restaurant’s name comes from the building that houses it — the Gage Group Buildings, which were erected in the late 1800s. These buildings housed milliners who made fashionable hats for women around the world. Gage hats were well-known for their “superb style.”

The Gage Group Buildings, where The Gage is located, were originally constructed in the 1800s.

The restaurant’s team was inspired by the building’s upscale history to create its fashionable, worldly concept. In fact, the Gage Hospitality Group (GHG), which now operates several other restaurants in the city, also bears the same name and mission.

The Gage was the first of the hospitality group’s eateries, and it opened in 2007. Later, the group opened several other establishments, which are The Gage’s sister restaurants. These include the Beacon Tavern for American Tavern food, and Acanto, a restaurant for Italian fare and fine wine.

“Each concept in the collection offers an individual personality with a chef-driven menu, curated beverage program, and superior guest service,” Aaron said.

The Gage’s personality is a blend of European heritage with modern American style. The restaurant aims to make every guest feel welcome. All of the restaurant’s elements — from food and cocktails to design — reflect that goal.

“The Gage continues to be both a respected classic and an innovative leader among Chicago’s dining scene,” Aaron said.

The Gage serves “seasonally changing, refined, and rustic cuisine.” Though it often updates the menu, some of the standards stay the same. For partners who want to share, The Gage offers many tasty appetizers, including the poutine, made with pork shoulder, pork gravy, Wisconsin cheese curds, and jalapenos, or its scotch eggs served with dijon mustard.

Those looking for a hearty meal can enjoy the fish and chips entrée, made with Guinness batter, and served with malt tartar sauce and lemon. Couples often opt to share the butcher board, served with elk rack, ribeye, New York strip, and filet mignon.

Other popular entrées include the Thai Coconut Curry and the Bison Tartare served with pink peppercorn aioli and a quail egg. The Gage Venison Burger, topped with gouda, fried jalapeno, and mushrooms, is a decadent twist on the classic cheeseburger.

The Gage offers savory appetizers, including poutine made with pork shoulder and cheese curds.

And no trip to The Gage would be complete without desserts.

The restaurant offers seasonal apple cobblers served in large portions meant to serve up to four people. The winter cobbler option is made with apples, pears, cranberries, and walnut streusel and served with vanilla ice cream and black pepper cajeta.

Couples also have a plethora of options for pairing wine with their meals, and The Gage has earned local and national accolades for its extensive wine list. And wine pairings are listed beside menu items, so diners can quickly see the glass that will complement their order.

The Gage: Committed to Serving Generations of Guests

The Gage offers an inviting, yet sophisticated, atmosphere and a modern gastropub menu that daters and a diverse clientele can enjoy. It’s also one of the busiest restaurants in the city.

“We see an eclectic clientele made up of visiting tourists, global and local foodies, regulars, and those in town for meetings and conventions,” Aaron told us.

“We were seated in a section away from the main activity (at the entrance) to allow us to talk comfortably, the service was excellent, the food was delicious and not too pricey, and the place was spotless despite being fully occupied. We all enjoyed our dinner and left feeling good!” one diner noted in a review on TripAdvisor.

Couples can find a more intimate dining experience in the back room.

The Gage has established itself as a Chicago mainstay and earned a stellar reputation with diners. But Aaron and The Gage team are far from finished. The restaurant recently opened a new private event space named after architect Louis Sullivan, the designer of the facade of the building adjacent to The Gage.

“Located on the main floor of The Gage, the room is situated near the cozy fireplace and will feature views of the kitchen, making it an ideal space for intimate group dining and meetings,” Aaron said.

For couples who want to ensure they get a table, Aaron recommends making a reservation well before your date night. That’s because The Gage is such a popular place for locals and tourists alike to enjoy a delicious meal and a great atmosphere.