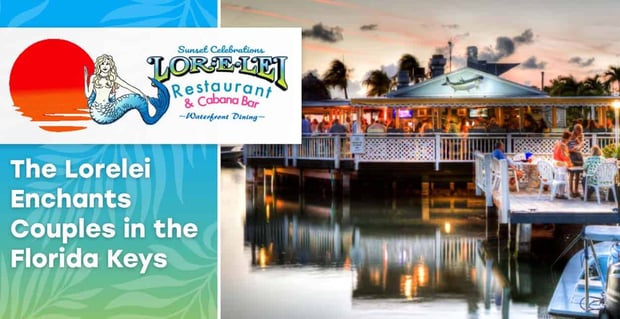 The Short Version: The Lorelei Restaurant & Cabana Bar has a prime waterfront location in the Florida Keys, and many locals and tourists come here to kick back with a tropical drink and a plate of fresh seafood. The outdoor bar and restaurant offers live entertainment throughout the week, and people crowd the deck during its world-famous Sunset Celebrations. As the sun goes down and music plays, many couples snuggle up to each other and create unforgettable memories at the Lorelei.

In the 1940s, a group of fishermen set up a cooler of beers and two folding chairs on an unobtrusive dock in Islamorada, and it became a popular gathering spot to shoot the breeze and watch the sunset over the Florida Keys. Today, the fishermen’s tradition of friendship and leisure remains at the heart of the Lorelei Restaurant & Cabana Bar, which sits on that same bayside dock of yesteryear.

John Maloughney and his wife Rhonda ran the Lorelei from 1989 until 2018, and they were instrumental to building its reputation. The waterfront restaurant is a family-friendly, boat-friendly, dog-friendly, and just plain friendly place to enjoy a casual meal or tropical drinks with loved ones.

The Lorelei is one of the most celebrated waterfront restaurants in the Florida Keys.

The Lorelei feeds over 1,500 people per day, and it can seat up to 350 people at one time. During its Sunset Celebrations, every seat is taken, and people stand in eager anticipation of one of the most beautiful sights Islamorada has to offer.

The sprawling bayside restaurant puts on a show every night with live musicians to entertain people as they await the magical sunset views that have made the Lorelei a local sensation.

The Lorelei features an open-air bar with a laid-back attitude, and people of all kinds choose to unwind here after a long day. On the patio, you’ll see boaters in flip-flops and torn jeans as well as vacationers wearing their Sunday best. When the sun starts to go down, couples settle into tables near the bay in hopes of sharing a romantic moment.

“The Lorelei is unique because the guests come from all walks of life and intermingle with each other as if reunited friends,” said General Manager Rob LeBrun. “It is not uncommon to hear a fishing boat captain at the bar talking about his charter that day, with a stockbroker on his left, and a school teacher on his right.”

A Casual Outdoor Restaurant Located on the Water

The Lorelei has an iconic mermaid as its welcoming service. She sits outside the entrance to the outdoor restaurant as if to say, “You’ve arrived.” The wood mermaid is a great tourist photo op, and it’s also a reminder of the inspiration for the Lorelei’s name. According to a German legend, the Lorelei is the spirit of a maiden whose lover went to sea and never returned. Overcome with despair, she threw herself into the Rhine River where she became a mermaid and began luring sailors with her beautiful song.

As a stopover on the water and the road, the Lorelei restaurant tempts fishermen, commuters, and daytrippers to take a load off their minds and enjoy themselves for a laid-back meal.

Couples can visit the Lorelei to enjoy lunch, dinner, or late-night cocktails.

The Lorelei menu features a lot of fresh seafood, including Florida Stone Crabs (seasonally), Alaskan Snow Crab, snapper, mahi-mahi, Bahamian Conch, Steamboat Channel Shrimp, and lobster. Lorelei’s World Famous Fish Sandwich is a popular menu item because it features the catch of the day and comes with house-made chips. Landlubbers can order a portobello burger, a tropical chicken sandwich, or a 12 oz. steak with seasonal vegetables, Caribbean coconut rice and beans, or fries on the side.

Make sure you save room for dessert because a slice of the Frozen Key Lime Pie will instantly put you in a vacation mood as it showcases the signature flavors of the Florida Keys. Or, if you’re more of a chocolate lover, you can always go with the Bistro Chocolate Fudge Cake, which is served with a heaping dab of whipped cream.

As far as drinks go, the bar makes a lot of refreshing frozen delights, including frozen margaritas, rum runners, daiquiris, and the world famous Lorelei Key Lime Colada, which is simply dessert in a cup with a kick! Beer lovers can also choose from classic draft beers as well as some imports and craft brews.

The Lorelei becomes particularly crowded during Happy Hour — from 4 p.m. until 6 p.m. every day — and many people show up early to grab a good table, settle in, and stay until the sun sets over the bay. Happy hour deals include $1.25 domestic draft beers and $3.00 well drinks. Plus, the Sunday Funday Happy Hour — from 7 a.m. until 11 a.m. — offers $3 Bloody Marys, screwdrivers, and mimosas.

Couples, families, and friends of all sorts come together at the Lorelei. Some people stop by on their way to Miami or the Keys, while others make a trip just to visit the Lorelei and enjoy low-priced drinks. Whether you’re a newcomer or a regular, you can’t help but become enamored of the bar’s chill and fun-loving vibes.

“The Lorelei is a great date restaurant because of the friendly service, outstanding menu, spectacular sunsets, live music, and great views,” Rob explained. “You can sit on the deck and dance the night away to a band playing rock and classic rock cover tunes, or you can sit on the beach under the soft lights and enjoy bayside dining.”

The Lorelei puts on a show every evening with its award-winning Sunset Celebration. The festivities start at 5 p.m. when the band goes on stage, and the dancing, drinking, and dining continue well into the night. The Lorelei’s event calendar features local bands, national touring bands, and even some well-known musicians.

World-famous magician Michael Trixx performs in a rock’n’roll magic show after sunset on Mondays, Wednesdays, and Fridays. His high-energy performance has turned heads on “America’s Got Talent,” and he keeps his show fresh by constantly adding new, jaw-dropping tricks.

Of course, the sunset is typically the headliner of the evening. The light sparkling on the water creates its own kind of magic, and it serves as a serene backdrop to the lively outdoor bar.

The Lorelei gives people a front-row seat to an awe-inspiring sunset, and it is a unique wonder every time.

Many customers rave over the food, service, and ambiance in this tropical escape, and it has become a favorite destination for wedding receptions, anniversary dinners, birthday parties, holiday celebrations, and other momentous occasions.

“One of the most romantic dates I ever had was at Lorelei’s,” said Ana Christina P. in a Yelp review. She visited the bar on Valentine’s Day and said its live music swept her off her feet. “I will never forget that night. So relaxing, so peaceful.”

The Lorelei showcases the best sights, sounds, and tastes the Florida Keys have to offer.

Allison F. said the Lorelei gave her a wonderful introduction to the Florida Keys after a long commute from Miami. She and her husband sat on the patio and indulged in tuna nachos, mini-cheeseburgers, and a snow crab platter, and they had nothing but good things to say.

“My husband and I wanted to find a romantic beachfront spot that would also be fun and laid-back,” said Allison. “Lorelei’s was just that.”

“This has been our favorite place to enjoy The Keys for at least eight years,” said Jacqueline G. in a Facebook review. “We love the sunsets, the food, the music… If we have family over for vacation, this is the place we always share with them, and they love it every time.”

The Lorelei Has Become Famous For Its Great Food & Entertainment

The Lorelei Restaurant & Cabana Bar has hit the sweet spot between beloved local hangout and must-see tourist attraction. Its glorious sunset views bring in the crowds and keep people coming back day after day and year after year.

“The Lorelei is a Keys institution,” Rob told us. “Thousands of people have gotten engaged at the Lorelei because it was where they had their first date. They have had their wedding rehearsal dinner here, have been married on the beach here, and have spent anniversaries here. It is such a special place.”

Whether you’re planning a killer first date, a memorable anniversary dinner, or just a fun night out with your significant other, you can count on the Lorelei to provide a great atmosphere full of music, romance, and fun.