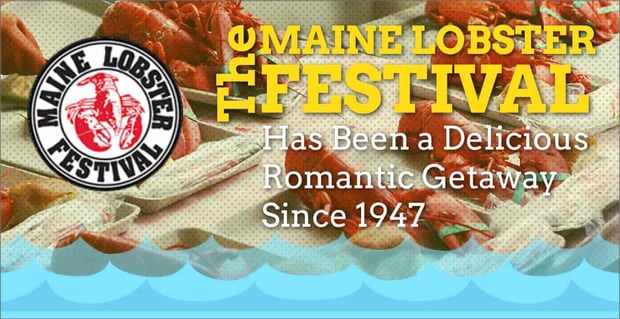 Editor’s Choice Award: The Maine Lobster Festival Has Been a Delicious Romantic Getaway Since 1947

The Short Version: The Maine Lobster Festival started in 1947 in Rockland, Maine, as a way to make use of an enormous lobster surplus. More than 70 years later, it’s still going strong as one of the most exciting annual events for a community that loves its shellfish. Each year, between 50,000 and 75,000 people attend the festival, which includes live music, a 5K race, arts and crafts, contests, and, of course, all the lobster you can eat. It’s a great event for couples looking for a fun date experience or a weekend getaway. In 2019, the Maine Lobster Festival runs from July 31 through Aug. 4.

Celia Knight, one of the many long-time volunteers at the Maine Lobster Festival in Rockland, Maine, said that many people who attend the event will meet their future husbands and wives — even if they don’t know it yet.

She recalled the story of a man and a woman who participated in one of the festival’s many contests — the blindfolded rowboat race. In the race, the rower is blindfolded, while the other person in the boat (the coxswain) gives directions. The blindfolded rower has to follow those directions carefully to have a chance to win.

The man and woman were randomly paired for the race and had never met before, but they found a common connection by communicating with each other in a competitive — and humorous — situation. After the race, they struck up a conversation. Then they started dating. Four years later, they came back to the festival, and the man proposed to the woman at the blindfolded rowboat race.

The Maine Lobster Festival is a fun place to take a date or meet that special someone.

“It was really cute,” Celia said. “It’s funny; I meet people all the time who come to the festival on their first date — and some even propose there.”

The festival has hundreds of bricks that line the area where chefs cook all of the lobster, and more than a few have the names of couples who had their first date at the festival written on them. The Maine Sea Goddess Contest often results in more than a fun evening for the contestants; many of the escorts and the princesses participating in the contest end up meeting afterward and going out on dates.

“We hear so many romantic stories. We also have a lot of great bands that come, and people meet out on the dance floor, too,” Celia told us.

For the connections it fosters, and the fact that couples can make it an annual tradition, the Maine Lobster Festival has earned our Editor’s Choice Award as an event for a date or a weekend getaway.

The Maine Lobster Festival started back in the summer of 1947 when the area’s lobstermen caught a surplus of shedder lobsters — also known as soft-shell lobsters. Back then, they couldn’t simply ship them to lobster-lovers across the country. Instead, they had to get creative and figure out a way to encourage the community to pitch in by eating as much lobster as they possibly could.

“So, they started by offering all-you-can-eat lobster for $1,” Celia said. “When it began, it was a one-day event for local people.”

Since 1947, the main attraction at the festival has been its lobster.

From there, it grew dramatically year after year. Now the festival has a variety of events, including a carnival, live music, entertainment, contests, a road race, and an arts and crafts show.

“It’s still focused primarily on lobster, and the crustacean is king at the festival,” Celia said. “But there are all different types of food. The lobster dinners that we serve are so popular, but we have lots of other choices: lobster rolls, stews, salad. Any way we can sell a lobster or lobster meat, we try to do that.”

At the arts and crafts tents, you can buy all kinds of lobster-related pieces, including jewelry and pictures. If you have young ones, you can enter them into the annual Children’s Lobster Festival Parade, in which kids dress up as lobsters in one of the festival’s more adorable traditions.

Its newest event, which has been part of the festival for six years, is called Steins and Vines. It’s a ticketed event that makes for an ideal date night.

Held on the festival grounds in the afternoon, participants can sample beers and wines from local Maine breweries and vineyards. You and that special someone can learn about the craft of beer brewing and winemaking, as well as receive a commemorative glass. The event also includes a concert, as live music is a running theme throughout the festival schedule.

Plenty of Activities for a Couples Weekend

Since the Maine Lobster Festival is a community-wide event, make sure you and your partner take some time to enjoy the rest of the area, too.

“There’s so much to do in the area in addition to the festival. You can make a whole weekend of it,” Celia said. “Nearby, we have lighthouses, beaches, shopping, and hiking — anything that couples could want to do together. We have a lot to offer.”

Most of the entertainment is local as well. To capture the spirit of the community, festival organizers try to book as many Maine-based bands as they can. Musical genres include everything from rock and folk to country and jazz.

The Maine Lobster Festival offers opportunities for couples to connect in a unique New England setting.

“We host so many incredible local bands,” Celia said.

To see the entertainment schedule and get all the information — including where to stay and how to get to the festival grounds — you can visit the Maine Lobster Festival website’s information page.

While on the website, you can also check out the different vendors. If you don’t like lobster, the festival still offers plenty of other options. Although most visitors prefer filling up on lobster, non-crustacean favorites are hot dogs, french fries, and fried dough. The vendors, including the arts and crafts booths, are all hand-selected by the organizers. Demonstrations and displays are also planned throughout the festival — right next door to the main eating tent.

The most important aspect of the Maine Lobster Festival is that it supports good causes in the state. The nonprofit organization has given more than $500,000 to Midcoast Maine communities since it began. It supports food pantries, high school sports teams, community groups, emergency services, and even provides college scholarships for deserving high school seniors.

The reason the organizers can give so much money back to the community each year is that the festival is run entirely by volunteers, and more than 1,000 people sign up to help every year. All the directors are volunteers as well.

“We started off doing it on a volunteer basis, and that made it a special community event. People take much more pride in it,” Celia said. “And all the money raised by the festival, besides operating costs, goes back into the community. We don’t have to pay people, so more money goes back into programs needed in the community.”

The Maine Lobster Festival has given more than $500,000 to New England communities since 1947.

According to Celia, another aspect of volunteering is that it’s an excellent way for singles to meet each other — and get into the festival for free. To become a volunteer, you simply need to sign up for a four-hour shift. You’ll get a free T-shirt, admission to the festival, and, often, the chance to meet a lot of new friends.

“You can meet friends at festivals just by volunteering. That’s how a lot of couples have started,” she told us.

Of course, the festival also attracts plenty of families. The organizers encourage families to bring their children and make a long weekend of it. Everyone who attends has an opportunity to enjoy all the delicious food and beautiful vistas in this part of the country. That’s important whether you live far away or just around the corner.

“One of our biggest goals is to continue to increase community spirit,” Celia said.