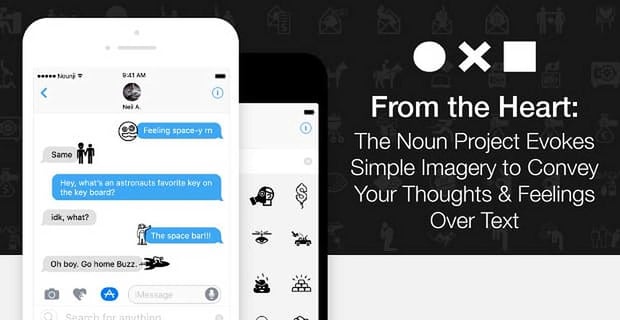 From the Heart: The Noun Project Evokes Simple Imagery to Convey Your Thoughts & Feelings Over Text

The Short Version: Telling someone how you feel is no easy feat. The pressure of saying the right thing can leave anyone tongue-tied in the heat of the moment. When words simply aren’t good enough, the Noun Project supplies creative romantics with thousands of striking images to capture exactly what they mean to say. The website (and iTunes app) collects and publishes user-generated icons that symbolize all kinds of objects, actions, and ideas. With thousands of downloadable stickers right at your fingertips, you have a compelling way to show affection with virtual roses, kisses, and other romantic images. The Noun Project gives communication an upgrade; daters can use this resource to find memorable icons and send an original, concise, and loving message over text.

My high school boyfriend could talk for ages about Mario Kart, chemical reactions, and pottery, but he would clam up on the subject of his feelings. Often our romantic moments were punctuated by nervous silences and mumbled half-sentences.

For my 15th birthday, he handed me a brown paper bag with no preamble. Inside was a handmade, roundish sculpture. He had carved and painted a Chinese character in the center. The dried clay felt cool and heavy in my palm as I looked at it from every angle. “What’s this symbol mean?” I asked.

He stared fixedly at my shoes. “It means destiny.”

Some people find it difficult to put how they feel into words, falling silent when matters of the heart come up. In such cases, meaningful symbols and romantic gestures can fill in the gaps. I certainly appreciated the effort and thought behind my boyfriend’s gift, and he didn’t need to use words to tell me he cared.

The Noun Project inspires their creator community to design and post thousands of icons.

If you’re experiencing a similar loss for words in front of a loved one and are searching for another way to express what’s in your heart, the Noun Project can help. This website has aggregated user-generated icons to make communication more expressive, visual, and evocative in 25+ languages. All you need to do is search by keyword to find images depicting love, romance, sex, and anything else you can think of. Then, using the Nounji app, these symbols can convey your affection in a unique way via text.

The Noun Project collects the work of icon creators in an accessible and central place. Their comprehensive lists foster imagining and sharing new ways to communicate more succinctly. From hearts to holding hands, the icons draw upon universal understanding to build connections without using words.

“Our mission is to create, share, and celebrate the world’s visual language,” reads the Noun Project’s website. “Humans have been using symbols to communicate for over 17,000 years because symbols have the power to transcend cultural and language boundaries — they are the one language everyone can understand.”

Founded to Create a Common Baseline For Graphic Designers

During the Great Recession, Edward Boatman got laid off from his job at an architecture firm. He was a disillusioned designer, feeling run down by the lack of autonomy in large bureaucratic companies, so he decided to make his own way. Alongside his wife, Sofya Polyakov, Edward returned to his childhood fascination for simplistic drawings of particular concepts and objects.

Edward Boatman, Head of Product for the Noun Project, founded the enterprise in 2010.

He thought a collection of symbols to represent every single object and idea in the world would be a valuable resource for artists. He couldn’t find a website with anything like that, so he and his wife got to work building it themselves. Neither were entrepreneurs, but they felt strongly about the idea, and that spurred them onward into the unknown.

The Noun Project began where the Internet’s avant garde ideas usually do — Kickstarter. In December 2010, Sofya and Edward teamed up with designer Scott Thomas to create a campaign for centralizing icons on the web. They were slowly gathering symbols and looking to gain some traction for their website. Their Kickstarter campaign raised more than $14,000 in donations and showed there was a market for the idea. Thus, the platform for a new, broader means of communication and artistry was born. “If I hadn’t been laid off,” Edward Boatman told 99U in an interview, “I probably wouldn’t have started it.”

This was the first effort of its kind, so the Co-Founders experienced some trial and error as they went.

Sofya Polyakov, CEO and Co-Founder of the Noun Project, lends a human perspective to the business.

“If I could do it all over again,” Sofya reflected, “I do believe we got too caught up in trying to solve every problem that could potentially arise — and, really, you just never know which way the company is gonna go until you really launch it.”

Today, the Noun Project’s website and app serve as a resource for anyone seeking a clearer communication of ideas. Their compendium of original symbols transcends language barriers and unites people around the world.

“It’s just really exhilarating to know the Noun Project has a life of its own,” Edward explained. “It’s also scary, but that’s what makes it fun — not really knowing what the next even three or four months is going to look like.”

Launched in September 2016 on iTunes, the Nounji App compiles the best icons from the Noun Project and offers them for use on mobile devices. “From hilarious to gross to serious — a sticker for any expression you need is right at your fingertips,” according to the app’s description. “We help people visually communicate information.”

You can get 150 of the organization’s most popular icons for free just by downloading the app. Annual and lifetime subscribers (and NounPro customers) receive access to more than 500,000 Nounji stickers. The interface is as intuitive and clear as their icons; simply drag and drop the symbol you wish to use into your message, and it’s good to go. The stickers will appear in full color and showcase the sender’s creativity.

“Love these. Perfect for when you want simple, stylish stickers. And there’s tons! Thankfully, the search function is very handy.” — CalifDude in a customer review of Nounji

Each week, the Noun Team adds thousands of new stickers to help users send the right message. It’s an engaging way to attract your crush’s attention. Because, let’s face it, the eggplant emoji is way overused and not really all that sexy.

From blowing a kiss to suggesting a sex position, the Noun Project has all sorts of compelling graphic images to help daters flirt using visuals rather than words. “Nounji gives everyone a visual voice,” according to their blog post. “We’re thrilled to be making the Noun Project’s visual language even more accessible and useful.”

The Noun Team: 13 People & Four Dogs in an Open Office

The Noun Project was a groundbreaking idea in 2010 and continues pioneering communication techniques to this day. Co-Founders Sofya and Edward remain committed to the company’s mission to inspire, connect, and captivate a global audience through a shared visual language.

The core Noun Team of 13 in-house staffers collaborate in L.A.

The sunlit offices in Los Angeles encourage teamwork and collaboration. The open atmosphere and long tables stimulate communication by removing any barriers between people.

It’s a fun place to work. The Noun Project’s offices are dog-friendly with as many as four cute canines putting in long hours beside their masters. Sofya’s dog, Monkie (affectionately appointed to Senior Security Guard) keeps a sharp eye on the Noun Project’s headquarters. Adorable pups Riggins (Morale Manager) and Cooper (Chief Whiner) entertain the offices with their antics. Meanwhile Bandero, a sweet-tempered Great Pyrenees, fulfills his role as Director of Snoozing by sleeping under the desks.

The lean team has a great sense of humor and share a passion for creative enterprises. While they enjoy the startup feel of the Noun Project, what truly inspires them is the ability to reach people through iconography.

“Noun Project is a highly collaborative place where the world’s visual language is shared and created,” according to the website. “We are used and loved by a huge community of designers, creatives, educators, Fortune 500 companies, as well as great organizations like Wikipedia.”

The Noun Project Lets You Express Yourself in New, Meaningful Ways

My boyfriend wasn’t a wordsmith, but that doesn’t mean his heart was any less full of love and passion — it just meant he had a harder time expressing it. Talking about feelings doesn’t come easy to everyone, and sometimes words fail even the most sensitive souls. If you find yourself fumbling for words and unable to pour your heart out, maybe you should look for a different way to express your feelings to your partner.

Millions of people use the Noun Project as a creative resource to translate words into simple and vivid imagery. You can browse by keyword through thousands of faces, objects, and symbols designed by creators the world over. One of these icons is bound to speak to you.

Since 2010, the Noun Project has innovated high-tech ways to express complex ideas in simple terms.

The Noun Project’s mobile application seamlessly integrates their services in daily life. By downloading the Nounji app, everyday people gain access to unique stickers offering a variety of ready-made messages perfect for a text. These original icons liven up textual communications and give daters more options when flirting with a crush. Rather than sending a long string of words, you can get straight to the point with Nounji’s images.

Sometimes your feelings make your throat clench and keep you from telling someone what they mean to you. To avoid awkward silences or miscommunications, daters can keep the Noun Project’s most romantic icons on hand for those moments when words fall short.

“For me, probably because I’m not a designer, I’m more interested in the human aspect of [the Noun Project],” said Sofya thoughtfully. “It’s just amazing how many different uses have emerged.”