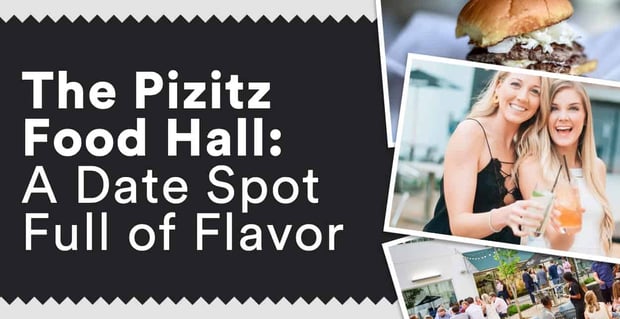 The Short Version: The Pizitz Food Hall caters to the modern foodie who enjoys sampling both international fare and local Southern cuisine. The large space welcomes independent vendors that have a reputation for making mouthwatering food ranging from street tacos to pecan pie. Located in downtown Birmingham, The Pizitz Food Hall features dozens of great places to eat, drink, and be merry, so it’s perfect for daters hankering for something new.

The Pizitz Food Hall opened with much fanfare in downtown Birmingham in 2017. The designers called it a food hall — not a food court — to reflect its upscale and trendy style. You won’t find fast food chains here. Only independently owned and locally beloved vendors make the cut.

The Pizitz Food Hall was part of an ambitious project to revitalize downtown Birmingham.

The 18,0000-square-foot space showcases the city’s top culinary leaders and continually gives local foodies a reason to return for seconds. The food hall currently has 12 food stalls as well as a Warby Parker store, a Sidewalk Cinema movie theater, and a co-working space called Forge.

Over the years, The Pizitz Food Hall has rented space to dozens of pop-up restaurants, food truck owners, bakeries, restaurants, and bars with something special to offer.

The Pizitz is home to many well-known food vendors — and it’s also home to hundreds of Birmingham singles, couples, and families. The Pizitz building offers a great downtown location with access to some of the city’s best foods packed in one place.

Couples can visit The Pizitz Food Hall on a date to grab a drink, share appetizers, dig into a meal, or split dessert. The food hall has all sorts of delicious options available, and it’s conveniently located in the heart of downtown Birmingham.

The Pizitz Food Hall is open from 11 a.m. until 8 p.m. Monday through Saturday. It is closed on Sundays. You can follow The Pizitz on Facebook to get updates on its special events, deals, and offerings.

“The Pizitz is a classic building that embodies the very best of what downtown Birmingham once was and is again,” the Facebook page says.

Exploring The Pizitz Food Hall is a treat for all the senses. You can smell the kabobs sizzling on the grill, see colorful cakes waiting on the shelf, and taste a lot of sweet and savory specialties.

Many couples enjoy the varied selection at The Pizitz Food Hall because it means they don’t have to compromise when going out on a dinner date. One person can get a Nepalese dumplings at Mo: Mo: while the other gets an acai bowl at JuicedUp Essentials.

If fried food is your thing, The Pizitz Food Hall has plenty of that as well. J Wings tends to attract couples with big appetites. The food stall has perfected its fried chicken, sandwiches, and loaded fries so every bite is positively dripping with flavor. It is open Monday through Saturday from 11 a.m. until 8 p.m., which gives people plenty of time to decide what sauces they want!

The Pizitz has a large assortment of food and entertainment available on its ground floor.

The Pizitz Food Hall features The Louis Bar at its center. The bar is named after Louis Pizitz, the original owner of the historic building. Sitting at the bar gives people a good view of the bustling food hall, and it’s a great place for couples meeting for drinks or bar bites on a first date.

Just a few steps away, Ashley Mac’s is a go-to spot for casual daters looking for a quick and memorable lunch date. The downtown menu offers gourmet sandwiches and salads along with a large selection of baked goods.

Sweethearts with a sweet tooth can make a beeline for Edolyn’s Pies, which sells handmade pies made with love. The pies range from lemon chess to chocolate brownie, and they’re all inspired from family recipes going back generations. Sharing a slice of pie can be a wonderful way to top off a date night and indulge in some classic Southern favorites.

Couples taking a tour of The Pizitz Food Hall will always find something unique to share on their date. Whether they’re hankering for a burger, a cocktail, or a slice of pie, The Pizitz Food Hall has it covered. The hall’s food vendors are in business to satisfy cravings, bring people together, and create beautiful memories.

The Pizitz Food Hall takes pride in having a little something for everyone. The space welcomes food entrepreneurs who highlight all types of mouthwatering cuisine. Taken as a whole, it’s a pretty impressive sight and can offer an immensely enjoyable experience.

Since its launch in 2017, many locals and tourists have lined up to give The Pizitz Food Hall a try. This Birmingham hangout has gotten hundreds of favorable reviews on Yelp.

The Pizitz offers a trendy backdrop for date nights and social gatherings.

“I love the Pizitz Food Hall, especially the Louis Bar,” said Rikesha F. in a review. “It’s a great place to gather for a girl’s night out with the bestie — or a jazzy scene for a Friday date night. You can sip and talk, or if solo, just sit, listen to the music, and enjoy the scenery.”

The Pizitz Food Hall has become a go-to hangout in Birmingham’s social scene. The space offers frequent events and specials that bring people out of their shell.

“The Pizitz Food Hall is a new experience for Birmingham’s dining scene,” according to a Made in Alabama article. “The menus vary widely, feature twists on traditional fare and include homemade Israeli cuisine, Latin-inspired ramen, Asian dumplings, Mexican street food and Southern biscuits, among other choices”

A local woman named Dana L. said that she enjoyed finding new delights in a historic building. She called The Pizitz Food Hall “a great example of revitalization in downtown Birmingham.” Dana noted the food hall is a great fit for her family because of its varied food options and relaxed atmosphere. “There’s something for everybody,” she said. “So long as your taste buds have some diversity.”

“I have died and went to foodie heaven!” wrote Kennard C. on Yelp after making multiple visits to The Pizitz Food Hall. “It’s definitely a cool place to check out if you want to explore the city!”

When you visit The Pizitz Food Hall, you are surrounded by delicious options. It’s a wonderful place to celebrate a special occasion or treat a date to lunch.

The Pizitz prioritizes quality and variety in its food stalls. The space is constantly changing to bring new talent and flavors to the forefront. In the spring of 2021, The Pizitz Food Hall will add NOLA Ice Broad St to its vendor list. This stall will combine the menus of two local food trucks and offer shaved ice cream and po’ boy sandwiches on demand.

By tapping into local flavors and Southern hospitality, The Pizitz Food Hall has created a unique dining destination that makes newcomers feel right at home.

“We have some great things in the works for future events,” The Pizitz team said. “Our favorite part of our job is seeing our residents come together, make connections, and enjoy the community that The Pizitz brings!”