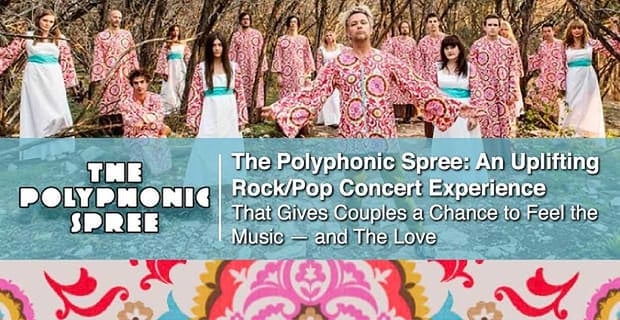 The Polyphonic Spree: An Uplifting Rock/Pop Concert Experience That Gives Couples a Chance to Feel the Music — And the Love

The Short Version: If you’re looking for infectiously positive and uplifting music performed in a fun and loving atmosphere, you’re not alone. That’s why couples and fans of all ages flock to shows by The Polyphonic Spree. Band Founder and Lead Singer, Tim DeLaughter, knows his audience well, and he frequently runs into couples who tell him they met at a show during fan meet-and-greets. Sometimes he sees them again the following year, and they’re married with kids. Concert-goers may even see a wedding at a Polyphonic Spree show. The big band — with as many as 16 musicians and singers — has built a dedicated following in nearly 20 years of touring internationally and has become a must-see group for couples and singles alike.

I love attending concerts, and I’ve spent many nights over the last two decades seeing live music performances and catching as many acts as I could that came through my town. I love how easy it is to be myself and laugh with strangers around good music. We’re all there for the same reason: to have a great time. I’e met life-long friends near the stage, and those friendships are based on our musical passions.

Concerts can also be an excellent place to find love. Men often catch my eye from across a crowd, and I even dated a guy I met in a packed concert crowd for three years. My friends Lynn and Frank met at a musical performance, and then they married a few years later. I’ve seen proposals on stage, brides and grooms fresh from their vows dancing in crowds, and countless happy couples having a great night out together. When good music is playing, romance is always in the air.

The Polyphonic Spree, with its choral rock style and uplifting music, is one such band that inspires personal connections. Founder and Lead Singer Tim DeLaughter said the talented musicians in his band deliver feel-good performances easing the anxiety in budding relationships — and strengthening romances, too.

“A lot of people tell me they used one of our songs at their wedding because they met at our show,” he said. “There have been plenty of first dates, and people even get married at Polyphonic Spree shows. And a lot of people meet when they go to shows.”

The infectious, positive vibe and incorporation of sing-along classics have been part of their shows since the group formed in Dallas, Texas, in 2000. It’s a big band, almost theatrical in style, with a roster of 16 musicians on some tours. The Polyphonic Spree has toured throughout the United States and Europe for nearly two decades, and they’re worth checking out if you’re looking for love — or just a lovely date.

From an Experiment in Sound to a Band Touring the World

Back in the 1990s, Tim was a member of the pop band Tripping Daisy. Its loyal following sometimes hailed Tim as a genius, and the band’s first album as one to take if they were stranded on a desert island. But his psychedelic modern rock style morphed beyond Tripping Daisy into a side project in 2000.

“I played with friends and family members, and it blossomed from there. It wasn’t supposed to be a band to play shows, but we ended up touring the world,” he said. “It was all an experiment with sound and what it would be like to have 10 people singing as one, a hybrid group of symphonic instruments with electronic and rock. It started out as an experiment, but it turned out to be much more because, 18 years later, I’m still doing it.”

The Polyphonic Spree’s style resonated with audiences when they opened for David Bowie.

It helped that glam rock legend David Bowie dug the band’s style. When the group began touring in the UK, they opened for him, and audiences responded.

The band ended up touring Europe for the next three years, and when Bowie toured the US, he had The Polyphonic Spree open for him each night. The band built a dedicated following in those early years and continues to find new fans today.

It can be awkward to attend a show and look around only to find everyone is 20 years younger or 20 years older than you, but when you go to a Polyphonic Spree show, it’s hard to feel out of place. That’s because the group’s fans are as diverse as the musicians on stage. The audience is a near equal mix of men and women and encompasses all age groups — from kids to senior citizens.

“It’s a broad spectrum, and you don’t feel like you’re at a kids show or an older, contemporary show. It’s a balanced group,” Tim said. “The people in the band are a spectrum of ages as well. You have teenagers all the way up to people who are 50. It’s versatile and dynamic, and it’s mirrored in the audience.”

Because the band has been touring and releasing albums since 2000, fans tend to stumble upon them in all kinds of ways. Good friends — or romantic partners — can turn you on to their music. Their high-energy sound was featured on a holiday episode of NPR Tiny Desk Concerts. But, to get the true Polyphonic Spree experience, you have to see them in concert at a theater, club, or venue.

“The story is told with instrumentation and lyrics. It’s like theater but not theater. It’s got a lot of energy, expression, and there’s not a dull moment on stage. That’s because there are so many people doing so many different things, but coming together and making beautiful music,” Tim said. “Everyone is unified, and I love it. It’s something I always wanted to do with my previous band.”

Fun for Couples: From Bonding in the Crowd to On-Stage Weddings

Everyone has fun at a Polyphonic Spree show whether they come alone, with friends or on a date, and that vibe all starts with the harmony that is happening on stage.

“We have that many good people on stage and can still be musically unified and produce something that affects people with a spirited energy that’s infectious,” Tim said. “It’s extremely positive, and that’s a great thing to be a part of.”

People bring the band’s music into their own lives, as well. Many fans have told Tim that the song “Sonic Blue” was the first-dance song at their wedding.

You’ll find men and women of all ages in the crowd at a Polyphonic Spree show.

“When we go to talk to people, one couple told me, ‘Hey we met at your show as a first date, and we got married, and now we have a 3-year-old,'” Tim said. “I can’t tell you how many times that’s happened, that people met at a Polyphonic Spree concert. And we had two people get married as one of the acts of the show on stage. That’s happened in Brooklyn and Dallas. It’s something about the Spree.”

That is why the band makes it a point to keep the atmosphere friendly, fun, and conducive to connections.

“It’s a testament to the Polyphonic Spree and the kind of people we bring in. That we can be a part of cultivating a relationship says a lot about the kind of band we are, and the environment that lends itself to a date,” Tim said. “It’s a friendly environment, and everyone is smiling. The positivity has something to do with it because everyone is free to be themselves.”

Tim has big plans for the future, but the biggest goal is to keep touring. The band is also currently working on a new record, he said.

“The goal is to keep it going and release music,” Tim said. “We’ve been writing a musical for a while now, and the ultimate goal is to turn this into a musical. It always has been, but there are steps we can do to express this in a proper musical degree.”

He’s also scoring a film, and the band members in the Polyphonic Spree are playing on it.

“All of our musicians are at the top of their game, and they are pretty amazing,” he said.

Chances are, if you attend a Polyphonic Spree concert, you’ll find someone who agrees.