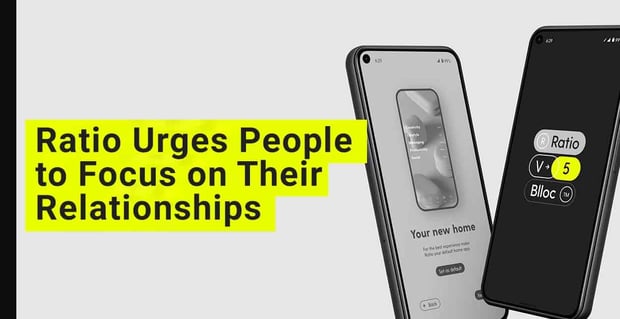 The Short Version: A Berlin tech company called Blloc has developed the Ratio app to disrupt the traditional smartphone interface. This innovative launcher keeps the home screen beautifully simple and helps users focus on the things that matter most to them — without getting distracted by colorful games and clickable apps. Ratio clears away the clutter in an effort to reinforce greater mindfulness and foster deep relationships that extend beyond the screen.

The digital world has become an attention-grabbing circus where people can easily get lost in their own feeds.

Many of today’s high-powered tech companies are pumping out distractions that have been algorithmically designed to capture attention. Look here! Click this! Subscribe now! It’s a 24-hour scrolling flash sale with push notifications and an app for everything you need — and everything you don’t need.

Online markets everywhere have become flooded with clickbait that tries to hook eyes and capture audiences. Yet there are some signs of a pushback against click culture. Some entrepreneurs are hoping to make a difference by promoting good mental health and real-life relationships in the tech world.

Created by Blloc, Ratio is in the business of catching and releasing attention. Its streamlined homescreen launcher eliminates distractions — and colors — in an effort to get online tasks done quickly and then return users to the world outside their screens.

“Smartphones are pretty excellent at offering distractions,” said Krishan Allen, who is Chief of Staff at Blloc. “Most apps ask for your attention. We ask for mindfulness. We want people to be mindful in how they use their phones and how it impacts those closest to them.”

Couples in relationships can and do quarrel over smartphone usage, particularly if one person is more absorbed by the scroll experience than the other. By committing to less screen time, a couple can make the most of their free time together and show they care without needing to press a single button.

“Attention is the most valuable resource in tech, and we want you to give that back to the people you care about,” Krishan said.

Ratio is currently available for free on Google Play, but the team said it may roll out a paid version soon. The application has also gotten stellar reviews from Android users.

“Overall, this is an amazing app,” said Zac M. in a Google Play review. “It’s helped me manage my time better. It’s a game changer for me.”

The smartphone launcher starts getting rid of distractions by getting rid of colors on the screen. The black-and-white look is all business, and it’s beautiful in a minimalist way.

“We keep things simple. The idea is to reduce that feeling of being drawn to bright colors and loud notifications,” Krishan explained. “We want to help you focus.”

The Ratio interface offers a calming space where individuals can get straight to the task at hand without distraction or urgency. The Drawers organize apps based on their function. Users can easily navigate to finance, lifestyle, communication, productivity, and social categories.

Every Drawer features a time counter that records how long a user spends in the apps in that category. Thanks to this tool, users can see if they’re spending their time according to their priorities.

Users can also organize their chats into a single interface. The Conversations section can pull texts from Facebook, Whatsapp, Instagram, and other messaging services and allow users to prioritize certain people or group chats. For example, Krishan says he has his girlfriend’s messages pinned to the top of his Conversations screen, so he can be responsive and attentive to his relationship.

Ratio has taken strides to simplify and streamline the smartphone’s apps, chats, and widgets to ensure that users can stop looking down and starting looking up at the world around them.

“The Drawer feature helps you reconfigure your attitude,” Krishan explained. “Keeping the home screen simple has provided balance to people’s lives. The minimalist atmosphere leads you away from the colors and distractions. It does wonders.”

Blloc is a technology startup based in Berlin, a city where innovation is on the rise. Many talented tech workers have made a home for themselves in this area, and some of them are bent upon changing the way people swipe and scroll.

“We’re fortunate to be in Berlin,” Krishan said. “The entrepreneurial ecosystem is flourishing here, so we’ve been able to hire strong tech-minded talent — people with a desire to rethink fundamental assumptions about tech.”

The Blloc team is passionate about revolutionizing the smartphone interface to be more functional and less disruptive to healthy thought processes and relationship building. The team is relatively small right now — about 10 people work out of its Berlin headquarters — but it is poised for future growth.

Although the team works in Germany, many of them have emigrated from other countries in Europe and other parts of the world. They have come from eclectic backgrounds, but they share a common goal to improve the digital landscape.

“We’ve grown up with technology in different ways, and we attack the problems of tech from a people-first perspective,” Krishan said. “Our users are global, and that’s reflected in our team.”

Ratio is a product that appeals to digital natives who have become dependent upon their smartphones and want to wean themselves off their screens. According to internal surveys, the majority of Ratio users lead busy lives and have to balance many personal and professional responsibilities. They turn to Ratio to find a quiet space amid all the noise of the internet. It’s their way of unplugging without completely disconnecting from their emails and text conversations.

“It comes down to fostering relationships ultimately,” Krishan explained. “People realize they’re spending too much time on their phones, and they want to decrease their attachment.”

One Ratio user said in a survey that the interface made it easier to reduce screen time and improve in other areas of life. “The design of Ratio somehow seems to promote healthier use of my time on mobile,” the user said. “Thanks for all the work!”

Krishan told us that one user wrote to the Blloc team that Ratio had helped him work through a traumatic experience and reach out to his family members for support. He said he had overcome his social media addiction and gotten more clarity on his life as a result.

“Oftentimes, people use their phones as an escape to avoid real issues in their real lives,” Krishan noted. “If we can be a tool for people to gain better awareness and improve their relationships, that’s what keeps us going.”

Ratio offers a comprehensive solution for any digital citizen who wants to scale back on screen time and place greater focus on in-person interactions and real-life relationships. The smartphone launcher is more than a screen time tracker — it’s an app organization and conversation streamliner. And it effectively gets rid of unwanted distractions that can pop up on old-school smartphones.

Looking ahead, the Ratio team is doubling down on its efforts to fix latent problems in digital life and usher people into a healthier way to communicate and engage with others.

“We’ll always be oriented toward reducing unhealthy phone usage and tackling that problem in different ways,” Krishan told us. “We’re coming out with a suite of features to help users track their well-being.”