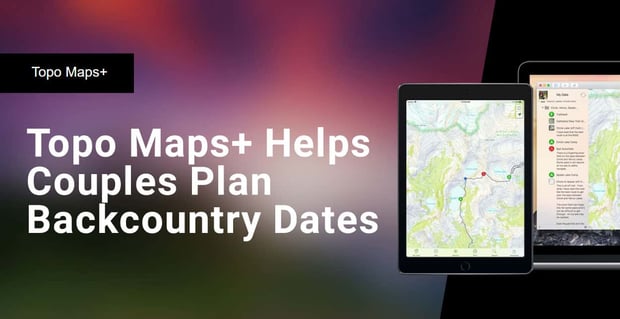 The Short Version: Anyone who’s ever considered more than a short hike from a paved parking lot knows the importance of planning the adventure. It’s crucial for both safety and fun to know everything about the trails you intend to explore, especially if you’re taking a date. Active couples can use an app called Topo Maps+ to get an in-depth understanding of the topography of their route and effectively track their next backcountry date together. Thanks to its offline capabilities, Topo Maps+ can help couples make the most of their experience in nature and lose themselves without getting lost.

When active couples or groups of friends are planning a backcountry adventure together, they need to know the trails and the elevations of their route. Topo Maps+ offers a topography guide so outdoorsy folks know what to expect along the way.

This app can replace old-school paper maps and allow backcountry explorers — including hikers, skiers, hunters, and mountain bikers — to plan their routes via a smart device. Topo Maps+ doesn’t just map out trails and camping sites, it also provides practical information about the surrounding topography. And, best of all, the app works offline, so no-service areas are no problem to navigate.

Couples going on a hiking date can explore the trail composition together on the app and figure out the best way to push themselves without going too far or getting lost in the wilderness. The app has over 500,000 trails in its map overlays.

“Folks using our app…they know where they want to go, and they’re trying to figure out how to go about it. They’re not pulling up a canned hike with simple information,” said Danny Scott, the manager of Topo Maps+. “They know their fitness level, that they can go 15 miles a day with this amount of elevation, so they sit down together to figure out how far they can go.”

Topo Maps+ was designed to help seasoned adventurers equip themselves for a good experience in the great outdoors. Daters can use the app to plan a challenging yet safe route through mountainous landscapes and enjoy picturesque views far from civilization.

Topo Maps+ is an app created by hikers for hikers. The company is based in Washington State, which is famous for its mountainous terrain. Danny said he and his team love going off the beaten path, and they often use the app when planning their own weekend adventures or company hikes.

Once Topo Maps+ had its offline routing feature, the team decided to test the system by hiking the Buck Creek Pass Loop. It was a four-day trip with 40 miles of hiking planned.

The mapping app ensures people don’t get lost in the wild.

“We were really feeling fresh and wanted to make a detour in our trip,” Danny said. “We wondered if we could do an extra side trip, but we didn’t know the mileage and elevation. This update to the app allowed us to map it out. Turns out, we were able to do it (adding 15 miles) because we could be at camp and still pull up the information.”

As a result, the team members were able to enjoy some of the most beautiful views of untouched wilderness they’d ever seen. It’s those kinds of opportunities that Danny and the team are interested in providing for the couples who use their app.

As of 2021, the app is available exclusively through the Apple Store. The Android version of the app is currently in the works and should launch before the start of the 2022 hiking season.

“We didn’t like the way the other apps portrayed the material,” Danny said. “This is what we do with our life. Our hobby is getting out in the mountains, so we actually use the app we created.”

Users Can Access More Than 500,000 Trails and Elevation Profiles

Topo Maps+ lets its users go deeper into the backcountry by providing many types of maps that can be overlaid to present a comprehensive view of the terrain. It is packed with useful information for couples going on a date into the wild.

“They can map out the route on the map,” Danny said. “You can see the trails on the map, but we don’t tell you where to go, how hard it’s going to be, or where to camp. You’re in the driver’s seat with our app.”

Topo Maps+ allows users to reference its maps even when traveling out of service.

Many hikers have used satellite imagery on Google Maps to get an idea of what the route will look like, but that doesn’t give the full picture. Some places have such thick forests that it is difficult to see the features of the land. That’s why the contour lines on Topo Maps+ can come in handy.

For example, if hikers only rely on Google Maps, they may not realize that there is a swamp or a hill underneath a clump of trees. Topography lines provide an important piece of the puzzle to understanding the trail before you leave the trailhead.

Best of all, couples can stay organized for their trips by creating unique tags and sharing their routes and waypoints with friends or family members who may want to join the adventure.

Topo Maps+ Will Get You Hiking All Around the Globe

Danny said Topo Maps+ is meant to augment adventures and make sure people stay safe throughout their experience. It is another tool for route navigation and can be used in addition to paper maps and GPS-chip tracking. Its offline capabilities ensure that help and guidance are always at the traveler’s fingertips.

“Half of search and rescue calls are attributed to some aspect of navigational error,” Danny said. “We’re huge advocates of being able to use your phone outside — but also knowing how to use a paper map.”

The app is used by people of all ages, fitness levels, and activities. Its regular users include a 77-year-old who goes out on horseback to check the safety of bridges located 20 miles from the nearest trailhead.

In extreme cases, Topo Maps+ can come to the rescue and ensure an outdoor exploration doesn’t go too far off course. For example, a man in northern Minnesota was hiking in the depths of winter when he stepped on thin ice and fell in the freezing water. After getting himself safely to dry land, he used the app’s Guide Me feature to find the most direct route to the nearest waypoint. The app showed him a straight line to the waypoint where he had parked, and he was able to reach it before hypothermia set in.

“Staying safe in the backcountry is all about planning, and that’s what our app is about,” Danny said.