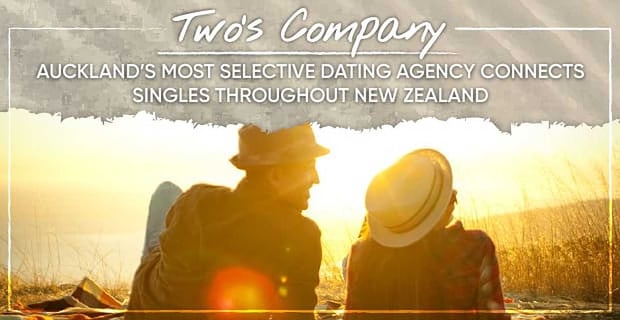 The Short Version: Since 2003, Two’s Company has fixed up Auckland’s most discerning singles on dates and has seen over 300 long-term relationships bloom as a result. The dating agency supports one of New Zealand’s most exclusive matchmaking networks, and each member is carefully vetted before he or she can join. Over the past 14 years, Two’s Company’s matchmakers have connected more than 6,000 Kiwis living in Auckland and Wellington. The two-person team claims responsibility for over 50 marriages and boasts a 90% satisfaction rate for all introductions. If you want to up the caliber of your dates, you can enroll in Two’s Company’s premier network and start mingling with eligible singles handpicked to meet your standards.

After years of running a talent agency, Sasha Madarasz felt ready to get out of the fast-paced film industry and make more of a difference in the world. She just didn’t know how she would do that. The answer came from her boyfriend at the time, who suggested she start a dating agency.

She took that idea and ran with it, excited to use her networking skills to bring love-oriented New Zealanders together.

First, Sasha looked into what people were saying about the most popular dating agencies and resources in town, took careful note of what they liked and what they disliked, and then formed a business model based on her research. She aimed to offer a discreet, personalized, and effective alternative to online dating.

“I had absolutely no experience at all, but some of the decisions I made back then were so good in hindsight,” she told us.

In 2003, Sasha established Two’s Company in Auckland, New Zealand, to help singles connect through a high-caliber dating network. Even though members are organized an online database, Sasha is very much a traditional matchmaker. She meets in person with every member who enrolls, and she also handles all introductions, making compatible matches based on over a decade of experience in the dating industry.

Today, Two’s Company boasts more than 600 active clients and has assisted over 6,000 people on the island. Although Sasha began Two’s Company to serve only Auckland singles, high demand has led her to gradually expand the network into Wellington and other parts of New Zealand.

“We’re not internet-based, and we don’t do events,” said Sasha. “We strictly do good old-fashioned matchmaking.”

How It Works: High-Caliber Daters Can Expect 4-7 Introductions

A majority of Two’s Company members are between 27 and 40 years old. Over the last five years, Sasha told us the membership’s under-35 demographic has grown exponentially, which she attributes to relationship-minded daters getting burnt out on dating sites. Rather than swiping with no rhyme or reason, young working professionals seek more personalized dating assistance in a vetted dating network, so they apply for a membership with Two’s Company.

The Two’s Company team doesn’t take just anybody on as a client. They meet with applicants in person first to see if their goals and the company’s approach are compatible. If the matchmakers don’t think they can satisfy that person’s dating criteria — or if the person doesn’t meet their criteria — they won’t allow the person to become a member.

The matchmaking team is selective to ensure no one is wasting their time or money. Once you’re past the screening process, you’ll pay the $550 joining fee, and the matchmakers will start arranging introductions for you. You’ll have a contract for at least four introductions, and, if those go well, you have the option to pay $150 for three more introductions.

Both members must agree to the introduction, or the date doesn’t take place. The matchmakers don’t show photographs, but they do discuss personality traits, education, age, and family values when recommending a person.

“People love the fact that every member, male and female, has gone through the same interviewing process and paid a decent amount of money,” Sasha told us, “because then they know the people they’re meeting are genuine and want to meet someone with long-term interests.”

Clients can put their contracts on hold at any time and for any length of time. Say you hit it off with one of your matches and date that person for a year — no worries, whenever you’re single again and ready to meet someone new, Two’s Company will pick up right where you left off in your membership. This gives clients the freedom and flexibility to meet someone and see where things go.

Many members are blown away by the high-caliber people enrolled in Two’s Company. Sasha estimated that well over 90% of her clients have traveled overseas, attended university, and own a house.

“You’ve got to have really good self-esteem to put yourself out there like this,” Sasha pointed out. “Our clients have great lives, lots of friends, hobbies, look after themselves; they’re just not getting that opportunity to meet other people.”

For many years, Sasha ran Two’s Company as a one-woman show. She did the introductions. She did the matching. She did it all. But, as her business grew, she needed help keeping everything running smoothly. About six years ago, she hired Roisin to help on the administrative side of the business.

Roisin now handles all the initial screening meetings (about nine per week) while Sasha does all the matching (about 80 per week). Two’s Company also employs a number of contractors to work on the company’s Facebook ads, website, database. It’s a relatively small operation, but they get a lot done.

“I think you’ve got to have a very empathetic personality to do what we do,” Sasha said. “At the same time, you’ve got to be pretty thick-skinned.”

Sometimes Sasha has to convince singles to give a date a chance — and she doesn’t give up easily. She discusses her clients’ hangups and offers counterpoints to get them out of a negative mindset. A client may say something like, “If he’s so great, why is he still single?” and she’ll shoot back, “You’re great, so why are you still single?”

At the very least, Sasha said she tries to get her clients to get to know one another before making a final rejection. “I have a second date rule — everyone should have a second date,” she told us. “I encourage it because I see the benefits of it. You can’t tell right away. You can’t make a lifelong decision after meeting one person one time.”

Sasha readily admits that she can’t control chemistry or attraction, and so she just tries to get good people to sit down together and see what happens. “I am ticking as many of the boxes of the sort of person you want to meet,” she said, “the rest is over to you.”

If you have reasonable expectations and an open mind, chances are you’ll have a good time with anyone in the elite Two’s Company network.

“We run a very straight-up matchmaking service,” Sasha said. “My job is to make sure I’m giving you the opportunity to meet really awesome single people whom you want to meet and who want to meet you!”

Two’s Company has hundreds of success stories from happy couples who met through the dating service, and every day more clients come away satisfied. Sasha organizes roughly 80 new dates every week, which means getting 160 people to agree to the introduction.

Sometimes, she has to talk singles round and help them get out of their own way. “I tell my clients, ‘It’s just a date.’ People take dating so seriously,” Sasha said. “You’re not making a marriage proposal. Just enjoy yourself dating. Enjoy the process.”

One Two’s Company client initially agreed to a match, but then she sent a message saying she remembered she’d already gone on a date with him 10 years ago. Back then, they were both recently divorced and didn’t feel a spark.

The man also noted that he’d met the woman before and said he wasn’t interested. Sasha told them both it was actually good they’d already met because that gave them a foundation to start again now that they were in different places in their lives. So, the couple went on a second first date, and six years later they sent Sasha a wedding announcement.

“You did an excellent job matching the two of us — we are a perfect fit! I’m looking forward to a lifetime of love and laughter with her.” — A.R., a Two’s Company member

“What can I say, you and your team hit the nail on the head,” G.J. wrote in a testimonial. “I couldn’t have asked for anything better.”

To date, Two’s Company has been responsible for more than 50 marriages and 300 couples in New Zealand. Plus, 90% of the feedback the matchmakers get from first dates is positive, and most clients agree to go on a second date.

“As you can imagine, in 14 years, we’ve have a huge number of marriages and babies come out of our introductions,” Sasha said, “But, if a person can come back and say it was a good introduction, that’s also a success for us.”

Two’s Company Gives You the Opportunity to Find Romance

In 2003, Sasha established Two’s Company to assist smart singles who have exhausted their own dating networks. The matchmaking firm set itself apart by offering discreet introductions, honest feedback, and steady support to an exclusive group of singles. Sasha’s hands-on approach to matchmaking has since satisfied over 6,000 Kiwi daters interested in meeting other high-caliber people.

Every month, Sasha organizes hundreds of introductions for men and women across New Zealand. Though she started Two’s Company as an Auckland-only network, her commitment to helping singles find love has led her to expand to other cities. In 2017, Sasha began flying to Wellington every other week so she could interview potential clients in the area and set up dates for members in New Zealand’s capital.

“We have both said that we would have paid double the price of your services considering how we both feel right now.” — L.N., a satisfied Two’s Company client

With over a decade of matchmaking experience behind her, Sasha is confident in her ability to increase her clients’ dating opportunities and make it easier for them to meet that special someone.

“I’ve got all the advice under the sun because I’ve been doing it for 14 years,” Sasha said. “I’m not saying I know everything, but when people actually follow my advice and just go for it, I’m able to help them meet someone they’d never be able to meet otherwise.”