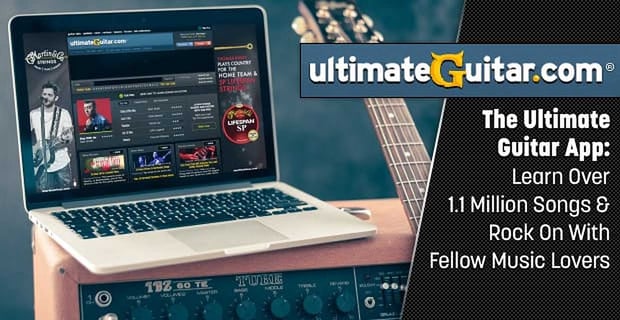 The Short Version: Launched in 1998, the Ultimate Guitar website and app is a community of rebels, rockers, romantics, and real guitar lovers. More than 13 million people have added over 1.1 million song tabs with chords, lyrics, and notes for guitarists of all skill levels. If you want to learn how to play a romantic tune for your loved one, this is a great place to practice, ask questions, and get feedback. The online forums host an engaged and passionate group of music aficionados eager to share their techniques, opinions, and advice with beginners. Additionally, Ultimate Guitar rewards their loyal community with fun contests, generous giveaways, and interactive services responsive to the needs of guitarists. Musical daters can consult with Ultimate Guitar’s community to perfect their guitar playing and compose a touching serenade for someone special.

One Saturday during my freshman year at college, I walked into my dorm’s common area to find the cutest guy on my floor strumming on a guitar by himself. I was single; he was single — it seemed like destiny.

I struck up a conversation with him about my dad’s faltering attempts to teach me guitar. I knew three songs but never really practiced. The guy immediately handed his guitar over to me and asked for a demonstration. He’d taught himself guitar as a kid, so he probably thought he could give me some pointers and turn me into a proficient guitarist in no time. Blushing profusely, I struggled to play what I remembered, and he got a good laugh from the discordant results. “So you don’t play guitar,” he said. Ouch.

Needless to say, we didn’t end up dating, but I still wonder what might’ve been if only I could play guitar well. We could’ve taught each other songs, enjoyed regular jam sessions, and bonded over a common hobby. As fellow guitarists, we’d make a natural couple, because it’s more fun to play with someone than by yourself.

If you’re looking to share and grow your musical interests in an open forum, the Ultimate Guitar website and app can hook you up with community-generated guides to playing your favorite songs.

Founded in 1998, this online learning tool empowers users to add song lyrics and chords for other guitarists to follow. Today, UG offers a searchable library of more than 1.22 million tabs with acoustic and live versions of more than 800,000 songs.

The site’s  featured lessons, written by knowledgeable guitar players, can walk you through guitar chords, soloing, songwriting, music theory, and other important playing techniques in a down-to-earth way. After all, it was written by guitarists like you. Plus, special collections showcase various categories of song such as pop hits, holiday songs, and campfire favorites so guitarists can quickly browse through community favorites.

“It’s important to us to make a product that will be useful for guitarists all over the world,” said Sasha Smirnova, Community Manager at Ultimate Guitar. “The biggest issue with guitar players, especially beginners, is that it’s easy to lose motivation. Here at UG, we know how important it is to practice almost every day and truly like what you are learning.”

To help you melt the hearts of your audiences, Ultimate Guitar provides in-depth musical guidance via online lessons and discussion forums where novices learn to become expert guitarists.

Ultimate Guitar currently boasts more than 13 million members, which makes the site the largest active community of guitar enthusiasts in the world. Many hardcore members contribute guitar lessons and songs so you can easily learn how to play rocking classics such as “Can’t Help Falling in Love.”

Guitar lovers can add multiple versions of a song in tabs, and popular artists tend to have a large repertoire to choose from. For instance, John Lennon has almost 500 tabs to his name, and Aerosmith has more than 800. All tablatures on UG are user-generated and reviewed by community members, who often make suggestions about how to tweak the arrangement. Some verified tabs have been approved by the artists themselves. A special approved queue allow their more than 200,000 tab authors to communicate with one another.

Using simple search tools, anyone can learn how to play romantic songs and serenade a crush.

You can search this vast song collection by band name, song name, rating, difficulty level, tuning, genre, and version. You can also randomize the results by clicking “get random.” Tab Tracker lets you keep track of your progress by marking songs as “learned” once you’ve mastered them.

Tab Pro, another Ultimate Guitar service, has over 250,000 interactive tabs with professional features like tempo control and a virtual fretboard. You can take advantage of the service’s free trial to learn and play guitar songs on any platform.

Ultimate Guitar relies on user feedback to continually improve their features and stay up with the hottest musical trends. Because they care about user input, Ultimate Guitar polls the community with a Wednesday Question, like what’s the greatest slow guitar solo of all time, and creates a list of top responses in a Friday post (Pink Floyd’s “Comfortably Numb” snagged the title of best guitar solo). Guitarists love to put in their two cents on the site and app, making their voices heard as they share rock’n’roll favorites.

Ultimate Guitar fosters a community atmosphere in every aspect of their site, bringing people of all skill levels together to learn from one another. In active discussion forums, UG’s most ardent followers come together to hang out in the world’s largest community of guitar enthusiasts. The forums have over 13 million registered users who have written over 27 million posts in over 1.2 million threads.

Guitar novices often pose questions to the forum community and receive thoughtful answers from regular posters and/or the UG team within a day or two.

One romantic member, username afsar3010, asked for suggestions for a romantic song to play for his crush. “If you play anything for a girl that doesn’t sound horrible, she’ll be impressed,” answered Ed Jalowiecki, a UG member. “Keep it lovey-dovey, and she’ll really be into it.”

The UG forum hosts a laid-back stage for music lovers to joke, chat, and ask questions.

The forum’s topics include musician talk, instruments, video promotions, classifieds for band members, recording techniques, lyrical battles, member news, feedback, and general conversations between the musically inclined. They’ll banter about anything from chord progressions to feminism. Whether you want to increase your band’s rep, learn about music theory, or simply share your experiences with similar folks, the UG online forums provide an open and rowdy space to chat.

The community vibe is strong here. Some forum members from the U.K. took a trip across Europe together because they felt such a strong bond with one another. “We have users who have been active for 15 years or more. That’s amazing.” Sasha told us. “Every day we try to implement something new that was suggested by users to make the forums better.”

Fun internal contests, like the UG IQ Contest or the Pumpkin Carving Contest, promote user engagement in a dynamic and friendly setting. “The UG staff loves the forum with its open atmosphere,” Sasha said. “A few of us are regulars there  — for example, I took part in the Secret Santa this year and got a present from Scotland.”

Based in Kaliningrad, Russia, the Ultimate Guitar team feels passionate about their community of music lovers. Eugeny Naidenov began the website while a university student and maintains a rocker vibe in how he stays authentic, original, and collaborative, even as the company grows in reach.

The UG team addresses internal as well as user feedback with a positive, fun-loving attitude. The company prizes fresh ideas and innovation to help them keep their edge in best serving guitarists. Every Monday at 9 a.m. sharp, each employee suggests an idea to make the site, app, or community better. Then, until the end of the workday at 3 p.m., the office buzzes with activity as they work to implement positive changes to UG.

The people who work at Ultimate Guitar actively engage with a community of musicians online.

“Everyone can suggest their ideas on improving the website. We all have an influence on how UG will look like tomorrow, and that’s awesome,” Sasha said. “It’s important to experiment, and we launch something new every few days.”

Of late, the UG team has focused on giveaways of guitars and gear in raffles promoted via social media. During the holiday season, for instance, the Ultimate Guitar gave away 17 rockin’ gifts as a thank you to their loyal members. Tens of thousands of people from over 200 countries took part in this amazing giveaway.

The Ultimate Guitar: Bringing Your Solo Act to a Larger Audience

On the Ultimate Guitar app and website, guitar players pick up the skills to play more than a million songs with confidence and style. Here, you can learn tricks of the trade, discuss popular romantic titles, and generally improve your musical skills so, when your crush hands you a guitar, you won’t embarrass yourself like I did.

From Aerosmith to Zac Brown, the Ultimate Guitar offers an extensive album of songs accessible via any desktop or mobile device. For daters looking to impress a loved one by crooning a love song and for singles wanting to join a robust crowd of musicians, the UG community provides ample support and camaraderie. On the forums, lessons, and app, enthusiastic guitarists learn alongside one another and work to achieve perfect harmony.

“We are constantly working to improve our apps and services,” Sasha said. “Our latest projects are more about user experience — something to keep you motivated.”