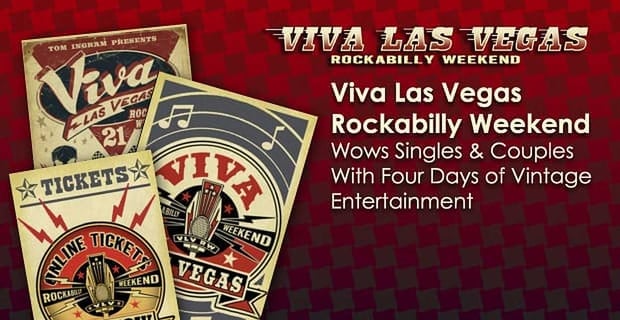 The Short Version: Viva Las Vegas Rockabilly Weekend is a four-day whirlwind of entertainment. From vintage car shows to live rock concerts, the event promises to knock the socks off men and women from all around the globe. More than 75 world-renowned bands and rock legends take the stage at the New Orleans Hotel in the last week of April, and attendees dance, laugh, and party all night long. Over 20,000 people come together to enjoy this unique carefree atmosphere where everyone appreciates old-school entertainment. You can take a date to a burlesque show or a tattoo lounge or even the on-site wedding chapel to share an unforgettable moment at the longest running music festival in Las Vegas. Mark your calendars because this year Viva Las Vegas Rockabilly Weekend promises a nonstop musical extravaganza featuring the Stray Cats, Jerry Lee Lewis, and Duane Eddy.

Some people spend their days humming jukebox songs from the ‘50s and wishing they could take a time machine back to the days of poodle skirts and letter sweaters. They love old-fashioned rock’n’roll music and vintage cars, but they don’t have many outlets in their daily lives to explore those passions and meet people who share their interests.

That’s why many old-school romantics, car enthusiasts, and music lovers save up all year to attend Viva Las Vegas Rockabilly Weekend, a four-day event dedicated to 1950s music, fashion, and entertainment. The Rockabilly Weekend sees over 20,000 attendees from all over the world and has garnered a stellar reputation as the longest-running music festival in Las Vegas.

“There are people who for 51 weeks a year feel out of place,” said Founder Tom Ingram. “Then they come to Viva Las Vegas Rockabilly Weekend, and, for one week, they feel normal.”

For the last 20 years, the Rockabilly Weekend has been a gathering place for rock’n’roll fans of all stripes. The weekend features over 75 bands at the New Orleans Hotel in Las Vegas, so you can spend all day and all night listening to live performances. Your ticket gets you a wristband, which gives you entry into any and all performances you want to see.

The event’s past headliners include Jerry Lee Lewis, Little Richard, Chuck Berry, Wanda Jackson, and Dita Von Teese. In 2018, the Stray Cats are coming out of retirement to perform on Saturday, April 21.

“Attendees can walk around and go to shows whenever and wherever they want,” Tom explained. “We take up the entire hotel and have tons of stuff going on from a pinup model competition to a car show.”

Over 20,000 Music Lovers Come Together at the New Orleans Hotel

The first day of the Rockabilly Weekend is all about meeting people and getting excited for the shows ahead. Once they’ve checked in to the New Orleans Hotel (or whatever hotel they’re staying at), attendees crowd the halls and showrooms looking for a fun way to break the ice. Some regular attendees reconnect with old friends, while newcomers build bonds by attending meetups at the Piano Bar or Deluxe Club. A singles meetup, sober meetup, and LGBTQ meetup help people, especially those traveling alone, come out of their shells and make friends right off the bat.

“It’s a social club,” said Robbyn Bukowski, who has helped run the event for the last five years. “The meetups are for people looking to make friends. It gives people a chance to meet, hang out, and have people to go to shows with throughout the weekend.”

If you want to start building social connections before the event even starts, you can always join the Facebook group, which has over 25,000 members. People often post about how excited they are for the event and discuss their plans for the weekend.

A San Antonio resident named Tina went on the Facebook group to ask for tips for a Rockabilly first-timer. Many enthusiastic commenters recommended staying hydrated, wearing comfortable shoes, and getting in line for shows early. Some recommended specific shows or outings, and others just offered general well wishes.

“I’d say have a good time,” responded HepCat Matty, “but that’s redundant. A good time is what VLV is all about!”

The Rockabilly Weekend is an all-encompassing event featuring burlesque shows, pool tables, bowling, car shows, fashion shows, meetups, and so much more. People may come for the music, but they stay for the atmosphere. Attendees as young as 21 and as old as 75 come together because they love old-school entertainment, and over 120 vendors show up to satisfy this diverse crowd.

Attendees don’t have to set up lawn chairs and stand outside in the heat to enjoy a rock concert at the Rockabilly Weekend. The indoor shows offer a more luxurious setting for a concert. Your wristband gives you access to all sorts of fun events where like-minded people mingle freely. The Rockabilly Weekend organizes entertainment all night long so the party never has to stop.

Because the event takes place in Las Vegas, you have plenty of food venues, casinos, and other entertainment options if you somehow run out of things to do. Which seems unlikely because the calendar is jam-packed with shows, games, and meetups.

“It’s not just about the music scene. There’s more to it than that,” said Tom, who has spent decades putting together a rock-awesome event for people all over the world. “People really connect to it.”

“It’s the Mecca of everything vintage,” Robbyn said. “It’s a great place for people who are into music, culture, and just having fun.”

Many Couples Save Up to Spend a Romantic Weekend Here

Viva Las Vegas Rockabilly Weekend happens in Vegas so, as you can imagine, quite a few weddings have taken place here over the decades. Some have been thoroughly planned by couples who love the music festival and wanted to have a memorable backdrop for their wedding and/or honeymoon. And others have been more spur-of-the-moment ceremonies inspired by the romance and excitement of a musical weekend away.

You can have a fun themed wedding at Viva Las Vegas Rockabilly Weekend.

The music festival has a mobile wedding chapel on site at the hotel, so couples don’t have to look very far for a place where they can tie the knot. Whether it’s a spontaneous decision or something they’ve talk about for a while, many couples take advantage of the convenient chapel and make the Rockabilly Weekend something they’ll always remember.

Weddings and vow renewals range in price from $30 for nonlegal ceremonies at the car show to $300 for the Rockabilly wedding package, which includes the services of a professional photographer.

“You’ll have your choice of ceremonies, with either Elvis, an amazing Rockabilly singer, or a traditional minister doing the honors,” according to a 2014 blog post. “Flowers, photos, and the most picturesque of settings are all included for a lifetime of memories.”

The Rockabilly Weekend: Rock Out at a Dating Hot Spot

For the last two decades, Viva Las Vegas Rockabilly Weekend has entertained people from all walks of life. Regardless of whether they’re old enough to remember the 1950s, these attendees all feel a strong connection to the golden age of rock’n’roll and enjoy going back in time for a weekend at the New Orleans Hotel. The four-day music festival has grown into a beloved annual tradition thanks to the loyalty and ardor of its fan base.

“We just want to keep the festival running,” Tom said. “We’re not about taking over the world or anything like that. We just enjoy what we do. We enjoy giving couples as well as singles a great place to hang out and enjoy music, cars, and good company.”

If you want to stay hip to the Rockabilly lifestyle all year round, you can listen to Tom Ingram’s radio show, which features classic tunes in episodes that last about an hour and a half. Maybe you can play it on a date to recapture the magic of that weekend away.

“Some people spend the whole year saving their money so they can come to the Rockabilly Weekend,” Robbyn said, “and that means everything to us. That’s what makes this event so incredibly special.”