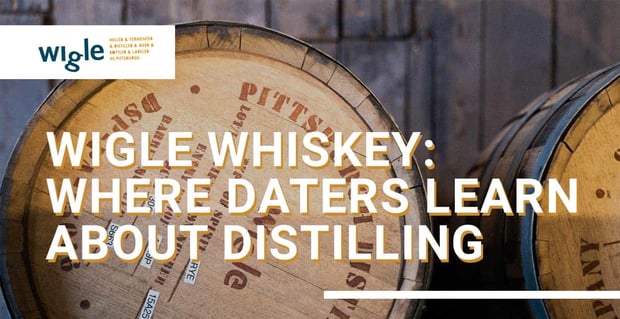 The Short Version: Wigle Whiskey is a Pittsburgh distillery that invites dating and married couples to explore the region’s whiskey heritage. Couples can sample whiskey and cocktails in the distillery’s tasting room, and they can tour the historic facilities and learn about the famous Whiskey Rebellion of 1794. What’s more, visitors can take home a hand-labeled bottle of whiskey as a souvenir. For over a decade, the distillery has packaged and labeled over 500,000 bottles of premier whiskey.

Mary Ellen and Mark Meyer are a married couple who own and run Pittsburgh’s Wigle Whiskey alongside their daughter Meredith Meyer Grelli and son-in-law Alexander Meyer Grelli. They opened the distillery on a lark, and it became a local sensation. The couple were traveling with their adult children to Canada years ago when they noticed a number of wineries and distilleries along the way.

Mary Ellen said her children were the ones who gave her the idea and encouragement to open a distillery. “All the way home in the car, they were looking up stuff,” she recalled. “When we got home, they decided to start making white whiskey. We didn’t know about making any spirits, really.”

The Meyer family took this passion project seriously, and their enthusiasm never fizzled. Mary Ellen’s husband, son, and son-in-law enrolled in intensive courses at Michigan State to learn about distilling. As part of their coursework, they made test batches of whiskey and discovered where to buy equipment.

But soon, the Meyers faced a problem: Pennsylvanians had to buy their spirits in state-designated liquor stores. Mark is a lawyer, so he decided if he really wanted to open a distillery, he would need to change the law.

“He spent two years on this crusade to be able to do that,” Mary Ellen said.

Two years later, the family was ready to open Wigle Whiskey. The distillery was named after a key figure in the Whiskey Rebellion.

The tasting room opened to much excitement among local whiskey lovers, and the team has been holding tours and selling food and liquor ever since. This space has been the backdrop for countless romantic dates.

A decade later, Wigle Whiskey continues to invite friends, families, and couples to the distillery. The company recently reopened tours of its facilities after shutting down during the height of the COVID-19 pandemic.

Each Wigle Whiskey bottle is labeled by hand, so it has a personal touch to it. The Wigle Whiskey staff and community members have hand-labeled over 500,000 bottles — and counting.

A Product of Pennsylvania’s Whiskey Rebellion

History buffs will appreciate a date to Wigle Whiskey. American whiskey was born in Pittsburgh, and it has a proud history here. Scotch-Irish and German people moved to the area centuries ago and brought their knowledge of distilling and hearty German rye, the key ingredients to whiskey production.

“Monks were forced to leave, and priests had to flee to Scotland. They started making whiskey to sustain themselves,” Mary Ellen told us.

Whiskey production became a huge business in southwestern Pennsylvania, and it was taxed heavily.

This is where Philip Wigle enters the history. The modern distillery is named after a farmer who was a key part of the Whiskey Rebellion of 1794. Wigle fought against paying the same taxes on his whiskey-producing crop as the larger farms paid. He and others refused to pay the whiskey tax. Rye was the only crop he could transport over the mountains without it spoiling.

“He was a German immigrant and fought in the American Revolution for unfair taxes. He came back home and tried to eke out a living as a small farmer. The only crop he had to make money was being taxed at the same rate as large distilleries. It was a flat tax,” said Mary Ellen.

The Whiskey Rebellion involved thousands of rebels protesting unfair whiskey taxes. They burned down the home of local politicians, and they tarred and feathered tax collectors. In the end, 30 men were dragged to Philadelphia to stand trial for treason.

“It was the Wild West out here. Harry Truman said it was one of the events in our history where the Constitution was tested,” Mary Ellen told us.

Some of Wigle’s descendents have visited the distillery over the years, coming from as far as Texas and California to get a taste of their family history.

Building a Community of Whiskey Lovers

Wigle Whiskey has a devoted following from southern Pennsylvania and other parts of the country. The distillery is known for hosting public events that make perfect date activities. Many couples have enjoyed dates at cocktail classes or labeling parties.

“I was responsible for labeling half a million bottes. I met thousands of people. They still keep in touch. It has created a wonderful community. I think communities are hard to come by — it’s a busy world — and I think it’s made it all the more precious now,” Mary Ellen told us.

During COVID-19, only staff members have been able to attend labeling parties, but Mary Ellen said they’ll open them to the public soon.

The tasting room has reopened fully, and the events have encouraged whiskey lovers to come together and enjoy their social and dating lives.

Guests have a lot of good things to say about Wigle Whiskey in reviews.

Deanna says, “I have celebrated many big life moments of my life at Wigle — our engagement, our wedding rehearsal dinner, sharing the news of expecting our first child with family. I could not have imagined those events transpiring anywhere else. It was the perfect setting to share the most joyous of times with our loved ones.”

Lorelli said she appreciates the community at Wigle Whiskey as well. “I kept meeting the most interesting people,” she said. “You seem to be a magnet for people with depth.”

From historians to photographers to chemists, Wigle Whiskey welcomes all comers and provides libations that make conversations flow and time together feel even more special.

The Wigle Whiskey team shares a passion for preserving the history of whiskey production in Pennsylvania. Recently, the Meyers earned a grant to refurbish the 100-year-old building where they produce whiskey and maintain a museum space dedicated to Pittsburgh’s role in the Whiskey Rebellion.

“Part of its history is that it was a brewery. It used to be part of a brewery across the street. The Germans were making beer here, and there is an underground passage across the street where it was bottled,” said Mary Ellen.

Couples can learn some interesting facts on a distillery tour or event. For instance, Mary Ellen explained that Kentucky bourbon has its roots in Pennsylvania whiskey production. Thomas Jefferson gave free land to people in southwestern Pennsylvania if they would move south and grow corn.

“We take pride that we originally trained those Kentucky distillers,” said Mary Ellen.

She also told us that Andrew Mellon, who was the secretary of the treasury during Prohibition, made a profit from the product his government made illegal. In the 1920s, he inherited what has now become the longest continuously-running distillery in the country.

Couples looking for an unusual date can explore the Wigle Whiskey grounds together. First, they take a distillery tour where they can learn about American history. After that, they can enjoy whiskey cocktails in the tasting room. If they’re feeling peckish, they can also get burgers, salads, and other food.

“Going on a date here takes the awkwardness out because there’s lots to do and lots to talk about. There is so much quirky history,” said Mary Ellen.

It turns out Wigle Whiskey is something of a good luck charm for daters. Mary Ellen said she knows half a dozen couples who met for drinks or at labeling parties and are still together.