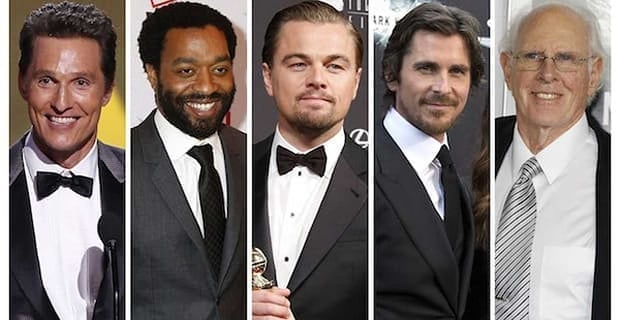 These stars will be walking the red carpet in honor of their performances on the big screen, but today they will be topping our list for the best and worst sex appeal.

At DatingAdvice.com, these nominations are measured by a different “O.”

These actors know what they want and how to get it, so are you ready to give it? These men take the lead in The Big O picks!

Leonardo DiCaprio still makes my heart sail like the Titanic on a Friday night. Trust me when I say I would follow him into the depths of the Atlantic.

He can swoon, wine and dine and charm himself into your bloomers, and the magic doesn’t stop there. According to co-star Margot Robbie, he likes it when a woman takes charge.

Other than the accent, which is a major turn-on, this actor has shown resiliency, energy and determination to go beyond survival and live. Now imagine what he could bring to a dying sex life.

From “40-Year-Old Virgin” to a cub on Wall Street, this off-beat funnyman has to be packing something not obvious. The best ones in bed always have a hidden talent.

A superhero, an android and now a slave master in this historical piece, Fassbender exudes a raw masculinity that will dominate in the bedroom.

The elderly Woody Grant has won a million dollars and is taking a trip to Nebraska. You know what he will buy with that? Viagra. You may want to get to him before he goes into cardiac arrest.

“With Christian Bale sporting a pot

belly, money is as sexy as he gets.”

These guys don’t quite get the girl or really make you dry where the sun doesn’t shine. No, not your throat.

But it’s not for lack of trying. With these actors, you may only want to go to second base.

Money, power and a perm?! A head full of plastic rollers must be very uncomfortable when he’s, uh, down there.

Jared plays a badass transgendered woman helping to smuggle drugs to HIV/AIDS patients. The heels and nails alone add some fetish and kink into the bedroom, which is a plus.

After all, a man knows what a woman wants after walking a mile in her shoes, but it’s not cool if it’s in my shoes.

A little pirate and captain role play may be on the menu for some couples, but Barkhad Abdi doesn’t quite fit the “Pirates of the Caribbean” fantasy I have pictured. If a guy’s best line is, “Hey, baby, relax and everything will be OK,” it usually doesn’t turn out that way.

Money and power usually go a long way when talking sex appeal, but with Christian Bale in this bad suit and sporting a pot belly, money is as sexy as he gets in “American Hustle.” But a spanking on the other hand…

We kick of the list with dear old Matt, whose southern drawl and familiar roles on the big screen tug on heartstrings in this biographical drama based on the life of AIDS patient Ron Woodroof.

However, McConaughey’s performance reminds me of his “Failure to Launch” performance with Sarah Jessica Parker, which also failed to launch anywhere.

3 Best-Kept Secrets About Men and Sex