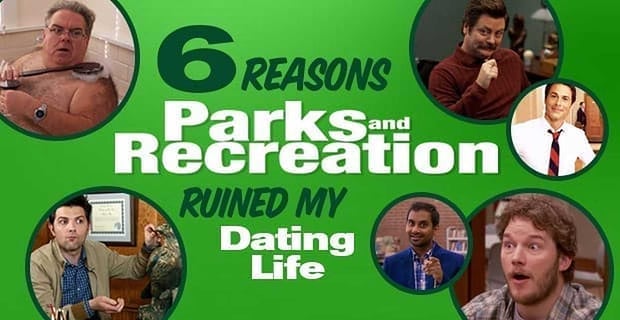 In honor of the seventh and final season of “Parks and Recreation,” I’ve decided to give the wonderful men of Pawnee, Indiana, the recognition they deserve.

Yes, the show has brought me hours upon hours of laughter, but it’s also done something else – it’s ruined my dating life. I can no longer look at a man without hoping he has a FBI agent alter ego or an affinity for breakfast foods.

The men on this list are the six reasons “Parks and Recreation” ruined my dating life. It makes me sad that I can’t blend all of them into one super boyfriend.

“I have no idea what I’m doing, but I know I’m doing it really, really well.”

Andy is my favorite character, and it’s easy to see why. Not only did MouseRat’s performance of “5,000 Candles in the Wind” in honor of Li’l Sebastian bring me to tears, but Burt Macklin’s investigative work in finding out who was pregnant (Diane) was top-notch.

Ben is the lovable nerd who will make you mac and cheese pizza when you’re feeling sad, mad, stressed, worried, happy, excited, nervous – or any other emotion for that matter.

His creation of the claymation movie “Requiem for a Tuesday” and the board game “Cones of Dunshire” prove his talents go behind just crunching numbers and organizing spreadsheets.

But calzones are still stupid.

Ron Swanson (or Duke Silver to those of us in the know) makes all other men look like rich women on diets. His woodworking skills means he’s good with his hands, and his love of meat and Lagavulin 16-year-old whiskey means he’s no frills.

But don’t let that manly mustache or grizzly stare fool you – this guy obviously knows how to get down and cut loose when he needs to.

Chris might make me jog when I don’t want to and take 17 vitamins and supplements a day, but that just means he cares about my health and safety.

He’s LITERALLY the most positive person I’ve ever seen in life or on TV, and we can all use more of that.

Plus he’ll never forget my name, as well as the names of everyone I introduce him to, and he will always have an endless supply of orange Post-its.

“Sometimes you gotta work a little, so you can ball a lot.”

Not only is Tom Haverford the genius behind Rent-a-Swag and small enough to pick up and throw around, but he’s also a meterosexual god.

I’m not much of a fashionista, but I would sport some Louboutins at a Ginuwine concert for him.

Plus I can’t call tortillas anything other than “bean blankies,” and I can never thank him enough for that.

How could you not love/be terrified of that face?

It’s only appropriate that Garry/Jerry/Larry/Terry would be last on this list. He may end up last in life a lot, but he’s number six in my “Parks and Recreation” heart.

Sure he set himself on fire at his own retirement party, but don’t forget he throws awesome Christmas parties, sings about eggs, bacon and toast and is always there when you need a shoulder to cry on.